It's not hard to see why the BB30 bottom bracket standard is the preferred choice of many professional cyclists. The oversized, 30mm spindle and large bottom bracket shell add torsional stiffness, providing a responsive and efficient pedaling platform without increased weight. The system's direct fit, press-in bearings also eliminate the need for aluminum bottom bracket cups, further reducing weight. With the technology licensed from Cannondale more than a decade ago, a multitude of manufacturers now produce BB30-compatible products. SRAM's right there leading the bunch, having engineered its new Force 22 Crankset with the BB30 standard and innovative, 'True 22' X Glide R chainrings.

One of SRAM's biggest accomplishments with the new Force 22 group was the generous carryover of Red's technology. The Force 22 BB30 Crankset represents this in full effect, as it was constructed with carbon crank arms and received Red's hidden bolt pattern and innovative 'True 22' X Glide R chainring calibration, giving you the ultimate in drivetrain power and precision.

The new SRAM Force 22 BB30 Crankset was built using unidirectional carbon in the crank arms, matched to a forged alloy spider. This design is similar to that which SRAM employed with its Red/Quarq design, and it now incorporates the spindle into the crankset's non-driveside arm. Because of its large carbon-optimizing structure, SRAM's crank arms are able to use less material, effectively reducing weight without negatively affecting stiffness. This also allowed them to rotate the spider to take advantage of the large, flex-fighting crank arm.

The Red Exogram chainrings have also trickled down to Force 22. These rings received extensive reworking with the development of Red, which now boost front shifting performance, specifically focusing on integration with the rotating, Yaw-caged front derailleur. Coined X Glide R, these chainrings are machined from 5mm thick 7075-T6 aluminum and now have been carefully tuned to accommodate the 11-speed drivetrain. SRAM used extensive computer-aided finite element analysis to optimize stiffness first, followed by shift ramp profiles. Then they set out to eliminate any unnecessary material without affecting the structure. SRAM placed the new shift pins to correlate with your cadence and cut the ramps to into a profile that works seamlessly with the new Force front derailleur.

What is the spindle length on this particular model?

Beautiful. Installed on my new frame, have not tried yet. Waiting for my Sram Etap group set

Is this the one that has longer spindle to accommodate BB30A?

Can I use this to replace an FSA crank on a Supersix that has all 105 5700 components (except for the crank)?

Will this run with the 10 speed chain?

Yes it will,with no problems. I'am using this same crank on my Cannondale Supersix.

This was a great addition to my 2013 Cannondale Supersix over the FSA Omega crankset. The performance is a lot better and nicer looking as well. I also replaced the front derailler at the same time with the Force 22 with yaw. The shifting has improved dramatically,no rub,no rasp. I use a 175mm crank arm and 50/34 compact. This works great with the rest of the SRAM Appex components that came with my bike. The only thing else I did was add my touch with the red chainring bolts. 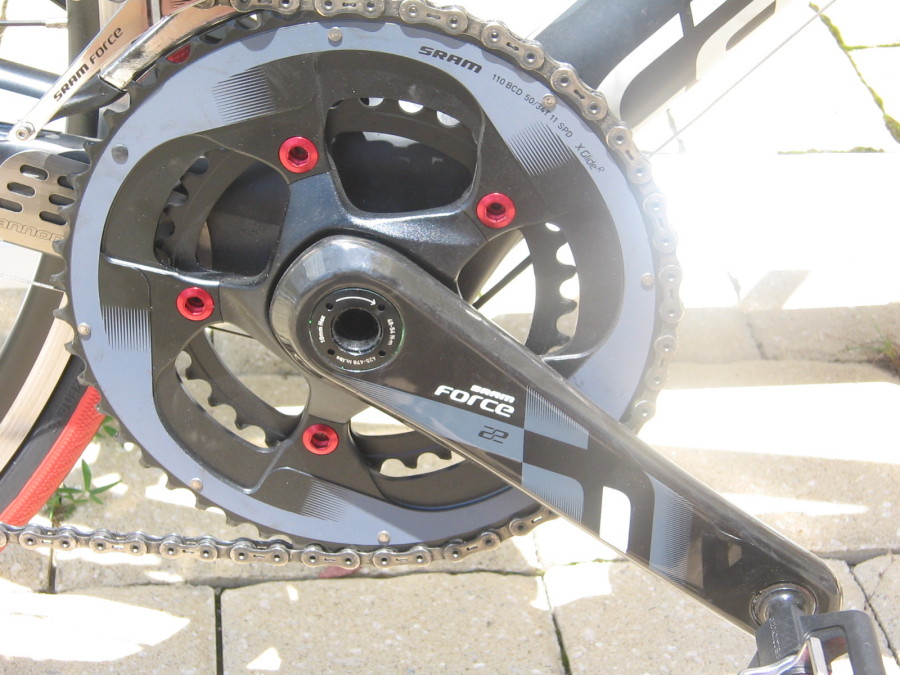 Will the BB30 crankset work on a Trek Boone with a BB90 bottom bracket?