When Georgena Terry brought women's specific bike design to the industry in 1985, she shaped a company destined to become a go-to for women cyclists. True to her passion of designing cycling gear that specifically addresses the fit and needs of women, she expanded the line to include saddles, the primary touch-point while riding. And while the company has expanded and grown, and Terry is no longer at the helm, the Butterfly Cromoly Gel saddle remains one of its most popular models.

Designed in 1999, the Butterfly Saddle, is by no means dated. In fact, it embodies the best of the research and development Terry has done with both professional as well as recreational cyclists. Constructed on FeC Alloy rails, the Butterfly is 155mm wide at the paddle which provides support for women's wider sit bones. The flatter top means that the saddle will not put excess pressure on the soft tissue area between your sit bones. The injection molded foam is multiple densities, with a stiffer foam on the paddles and softer foam near the nose. Additionally, the Butterfly features a thin layer of supportive gel along the top. Unlike squishy seat covers, the gel inserts are firm and provide optimal support without added pressure against soft tissue. A traditional pear shape, the saddle features a full-length channel with a cutout which also helps to minimize pressure.

The entire saddle is covered in smooth microfiber with textured leather. It is made in Italy and features the fine attention to detail that is the mark of Italian design.

The Terry Butterfly Cromoly Gel Saddle weighs 369 grams and has a length of 262mm. It is available in Black.

Comfortable, but not for long rides

I agree with the other reviewer: this saddle is super comfy for upright position riding, short rides, and commuting type riding. This saddle is not good for road riding or any long distance serious riding. Too soft, so too much pressure up front.

Good for commuting and shorter rides

I rode two different butterfly saddles for a while and came to the conclusion after my first 20+ mile ride that the only good use for this saddle is commuting. If you want a women's saddle that works great for city riding and you plan on putting it on a bike that isn't upright, you will likely love this saddle. If you plan on touring with it, I HIGHLY suggest you find a different saddle to use. Heck, shoot me an e-mail and I will personally find you a saddle that keeps your lady parts happy over the long haul. Definitely would not recommend for racing, training, or long bike tours. 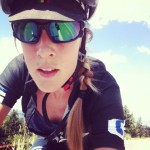 What sort of saddles would you recommend for touring? I'm trying to buy a gift for someone who hates her current saddle. Thanks!