Can't wait? Consider one of the other Clincher Wheels we have in stock.

For around the same price point of your typical carbon clincher wheelset, you could get the G3 AMP 35/50 Carbon Clincher Wheelset from PowerTap instead and get the added bonus of training with power. It's hard to imagine a product that has revolutionized the way people train and race more than the CycleOps PowerTap. Allowing users to monitor critical performance data in both real-time and post-ride has pushed athletic evolution leaps and bounds into the future. Now, CycleOps offers a race ready wheelset, featuring drastic weight reductions thanks to carbon fiber, technological breakthroughs, and the handling benefits of a light, lower profile front wheel and the improved aerodynamics and stiffness of a 50mm rear. Thanks to its racing a training ability, this wheelset is the most versatile and advanced PowerTap wheelset ever created.

CycleOps completely re-imagined the design of previous PowerTap models and improved multiple aspects ranging from rigidity to functionality. The new PowerTap G3 Rear Hub is a power meter on a diet. An 80-gram weight reduction from the popular SL+ makes the G3 rear hub one of the lighter power meters. CycleOps improved on the rigidity of previous models for the G3 by shrinking the hub profile and widening the flanges, ending the days of heavy, stiff, paint bucket-sized rear hubs. With the distractions of weight and stealth design out of the way, CycleOps improved the functionality and accuracy of data gathering. For one, CycleOps moved the orientation of the electronics that transmit user data to the end cap of the freehub body. With the new positioning, it's now possible to remove the electronics for service without swapping out the entire wheel, equating to more time in the saddle and fewer headaches.

The new G3 is equipped with an ANT+ and Bluetooth wireless transmitter that sends power, torque, speed, and virtual cadence data to either CycleOps' Joule or any computer unit that translates ANT+ or Bluetooth. The G3 is capable of storing up to 15 hours of data in one-second gathering intervals, and up to 30 hours of data in two-second gathering intervals. The G3 design still has a 'torque tube' with eight strain gauges, yielding measurements accurate within +/- 1.5% between 40 and 130 rpm.

CycleOps' AMP rims feature a wider width to create a comfortable ride with lower rolling resistance and better aerodynamics with today's wider rubber. And with all of that speed, excellent stopping is a must. AMP rims feature CTg braking technology that virtually eliminating the pulsing caused by heat build-up. Rims and brake pads run around 100 degrees cooler during use for better durability and reliability.

This product can expose you to chemicals including Lead, which is known to the State of California to cause birth defects or other reproductive harm. For more information go to www.P65Warnings.ca.gov.

Are these compatible with Shimano 9 speed cassette?

Is this hub Shimano 10 and 11 speed compatible?

Are you able to get a Campy-compatible free-hub body for the G3 hub?

Do they come with brake pads? If yes, what brand?

Answering my own question: They do come with Reynolds cryo-blue brake pads

Nice Wheels for the price

I got these on sale and had a discount and bought them because I wanted to get into powermeters. I have put them through the ringer and so far, despite one pretty good piece of iron in the road, they seem pretty bombproof. The powertap has worked flawless and paired instantly with my garmin edge500. My only wish would be that they came in a tubeless version.

Really nice all purpose road wheels. I purchased the set (Shimano by standard) and worked with SRAM to make them Campy compatible. Light, strong and bring a great data point for training to my road bike. SRAM Support was awesome. 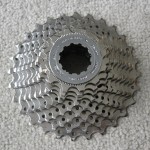 Jared, I would want these wheels to be Campy compatible too. What did SRAM Support tell you?

My PowerTap G3 wheelset connected right up to my 520, so I would not expect the 820 to be any different in that regard.

I've run this wheelset on and off for the past 4 years or so and they've held up exceptionally well. Its a great way to get into a solid power meter setup, and you end up getting some pretty decent carbon wheels along the way. The set is reasonably light (just about 1700 grams) with the power meter hub. The brake track is also solid but not spectacular, you're not going to get Zipp Showstopper quality braking, but at the same time I've put my set through the ringer on all sorts of steep descents with tons of braking and they've held up just fine. The 35mm front means you can ride this wheelset in any sort of wind conditions without any real danger of getting knocked around, and the 50mm rear gives you a little more free speed in the back. The power readings from the hub have been very reliable, i pretty much just change the battery out once a year and havent done any other work or maintenance on it. Obviously it cant give you a true left/right reading, but can read your torque pulses and interpret a pretty good idea of L/R. Would highly recommend this set, especially at this killer price

Are these wheels capable of being tubeless?

Hey Joe, These wheels are not designed to be run tubeless.