Paint the trial yellow and black.

We've always associated Mavic with speed on the tarmac, but the Crossmax SL Ultimate Men's Shoe applies the yellow and black philosophy of low weight and high efficiency to the world of knobby tire footwear. The Crossmax SL Ultimate earns its Super Light designation by shaving a claimed 30g of weight per shoe compared to the closest competitor in Mavic's XC/cyclocross line. The weight loss is achieved through a combination of reducing the number of lugs and adding Mavic's Ergo Dial lacing system, and those changes bring the shoe down to a claimed weight that would be comfortable in the middle of the brand's road shoe line.

Low weight doesn't mean low functionality or durability, though — and that's to be expected. After all, Mavic earned its reputation for a circumspect approach to R&D and adopting new technologies because it refuses to compromise on either quality, so we're happy to trust our ambitions and well-being to any product bearing the brand's imprimatur. This blend of reliability, efficiency, and low-weight starts with the Energy Grip Terra Carbon SL Outsole. Thought it ranks near the top of Mavic's stiffness index, it isn't as stiff as Mavic's top-tier road shoe. And that's a good thing for 'cross run-ups and the general abuse of the trail.

Other than the different sole and lugs, the Crossmax SL Ultimate features a lot of the same elements as the road-specific Cosmic Ultimate. These include Mavic's Energy Frame Carbon weave and Energy Lock Carbon heel counter, both of which maximize power transfer by eliminating fit slop when you're mashing through trail slop or peanut butter sand pits. A pair of Ergo Fit 3D+ Ortholite inserts help maintain comfort under foot while supporting your arches, and the Ergo Bonded upper and Ergo 3D tongue combine forces to wrap your feet in a non-abrasive, gently compressive fit.

These shoes are not for me. I bought these for my all-arounder shoes (100 mile MTB endurance and gravel/CX) but I will be relegating them to CX when the weather is cooler and running traction is needed. I sized up as recommended but the toe box is way too narrow for my feet (only moderately-wide feet). I had heel slip issues during the hardest out-of-the-saddle efforts. The upper material feels thicker than any other mountain shoe I have owned and is much stiffer. My feet were getting hot on 80 degree days and I plan on riding in hotter than that. The lacing mech is actually Mavic brand which felt clunkier than true BOA and I don't like how it releases. Picked these up as replacements for my Shimano XC7 and I liked the Shimanos better (though still not perfect). I just ordered Garneau Copper T-Flex as a replacement for these since the road version (Course Air Lite) are the most comfortable shoes I've ever owned. For the money, there are much better options out there. Lake and Garneau are better quality and also are a better fit for my slightly-wide feet. 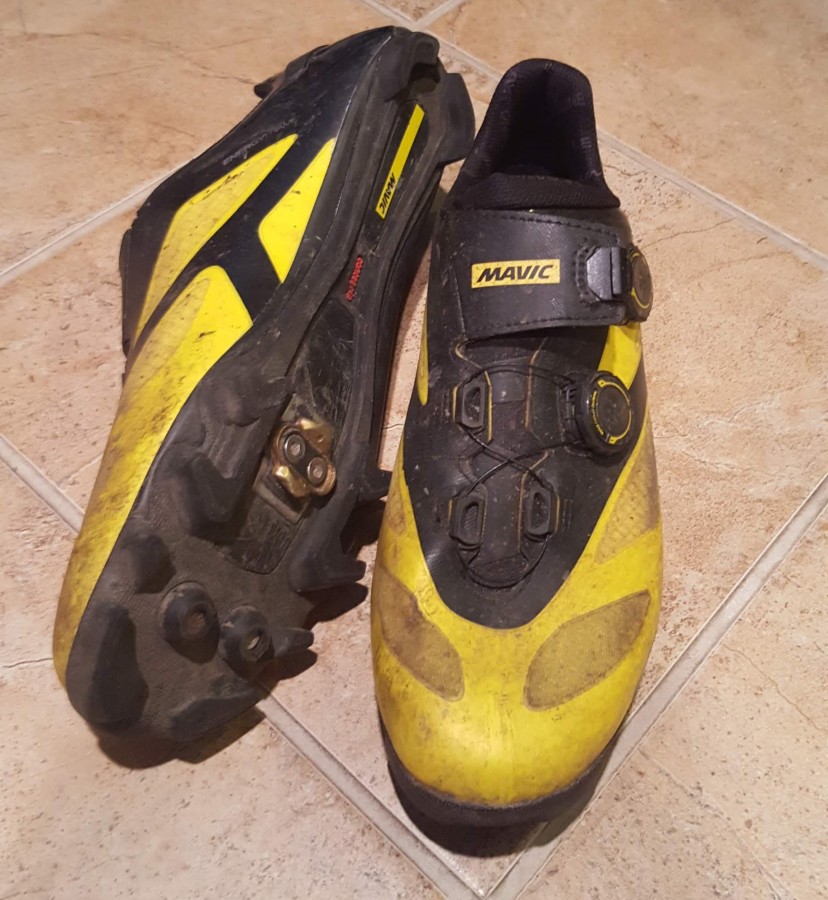 mavic is making some good shoes

I've always loved their wheels and have raced them for years, but a few years back I started trying some of their other products, including their shoes, and I have been quite pleased. These XC shoes have been my latest pickup and they are good! Very durable, with a good combination of stiffness/responsiveness, without excessive weight. I've also used them a bit for cyclocross and they are comfortable to walk and do short runs in as well.

Familiarity:
I've used it once or twice and have initial impressions
Fit:
Runs small

Coming from Mavic's Fury shoes, I had to get one half size up as is mentioned in another review, the shoes fit small. Once I got the right size (thanks Competitive Cyclist for such prompt deliveries and easy returns), I tested the shoe on terrain that's not too technical and was pleased with the stiffness of the shoe and the grip of the sole on rock. I use Crank Brothers' Candy pedals and the cleats fit well and I clip in and out without issues. The only thing that I've noticed for me is that while walking, there's a bit of pressure on the outside of my ankle from the cuff. I figure either I'll get used to it or the shoe will eventually soften to where I don't feel it anymore. Besides this doesn't affect me at all while riding, only when walking. The heel is pretty secure too, which used to be a bit of an issue for me with the Fury model. Oh, and the boa closure is awesome.

Familiarity:
I've put it through the wringer
Fit:
Runs small

The BOA adjustment is solid and accommodates a pretty wide range of feet, from narrow and skinny to fairly average, I wouldn't pick these if you have a particularly wide foot though. Sizing runs a touch small, so I would size up 1/2 to 1 full size. Otherwise these are light and stiff but have been comfortable for long days in the saddle.