Kuat spent years overhauling its NV 2.0 Bike Hitch Rack and fine-tuning it to perfection, so you'd better believe that it's ready to shuttle your treasured two-wheeled baby to and from the trailhead safely. Kuat managed to find room to improve just about every feature of the NV 2.0, all of which contributes to a stabler, more reliable tow than the NV 2.0's already solid predecessor. Carry up to four bikes on the NV 2.0, using the adjustable cradles to accommodate different sizes, and enjoy peace of mind from this year's reinforced individual bike cable locks.

Can you secure a bike with fenders?

Had the original NV and this is a nice update. NV2.0 is very functional and looks great. Individual locks for bikes, adjustable cradles and wide tire acceptance. Trail doc improvement and foot assist add a nice touch.

Along the top are the features on the newer version of this rack. The bottom photos are on my NV rack from 4-5 years ago. All aspects have been improved and refined. Stoked! 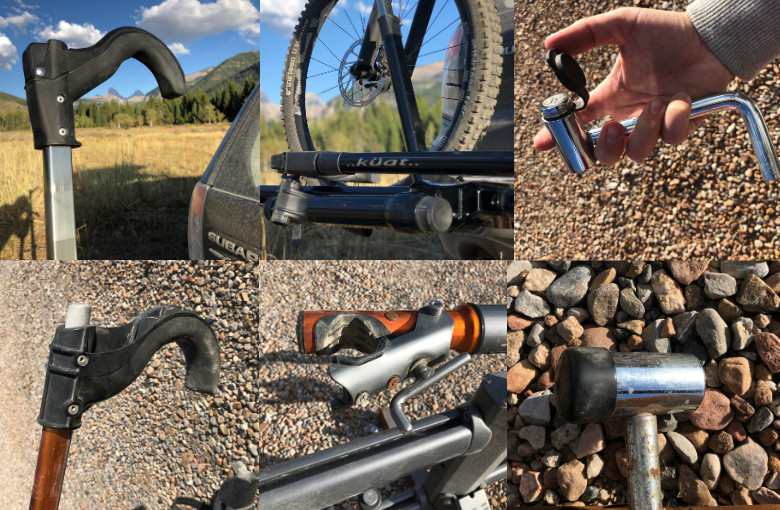 I had a Kuat NV rack from 5-6 years ago. I gave that to a friend and have been using the newer model of the NV 2.0 for the past two months. Kuat has incorporated some thoughtful upgrades to their already innovative and user-friendly rack. Some of the upgrades I personally appreciate include the following: * Trail Doc: This has been modified from the older version to increase ease of use and simplify the number of steps you need to take to get it set up and running. Clumsy levers have been replaced with switches and a spring loaded hanger. (Previously you had to twist a metal rod to capture your seatpost while simultaneously holding your bike (tough but not impossible). With the new design you simply load your bike in the hanger and clamp it on - WAYYY easier. * The new pivot lever is WAY easier to use when switching between the 'open' and 'closed' mode on the rack to access your trunk. It's easier to reach, easier to deploy, and way more conveniently placed. * The front tire pivot to secure your bike has been improved. It is more self-explanatory to use (friends always used to struggle with this, now they can load their bike without asking questions or fumbling). It also must have been extended in length because it's a lot easier to saddle up my 29" bike now. Button system is better/easier to use. * I like that I can install this bike rack all by myself with no tools. I am NOT mechanically inclined and it took me about 45 mins to build the rack and install (including watching YouTube). I would recommend grabbing a friend though, because it's a bit unwieldy to piece together without an extra set of hands. * What I MOST appreciate about this rack though, is how easy it is to take on/remove. I live on a dirt road in the summers and it is surfaced with this nasty compound meant to reduce dust. When it rains, it hold onto the water turning into some sort of THICK disgusting gloop. I can easily remove the bike rack when it's raining and it isn't much of an inconvenience. - Durability is TOP NOTCH. My 5 yr. old rack has tons o life left in it and continues to haul bikes on the regular. Looking forward to MANY years ahead with this bomber rack. 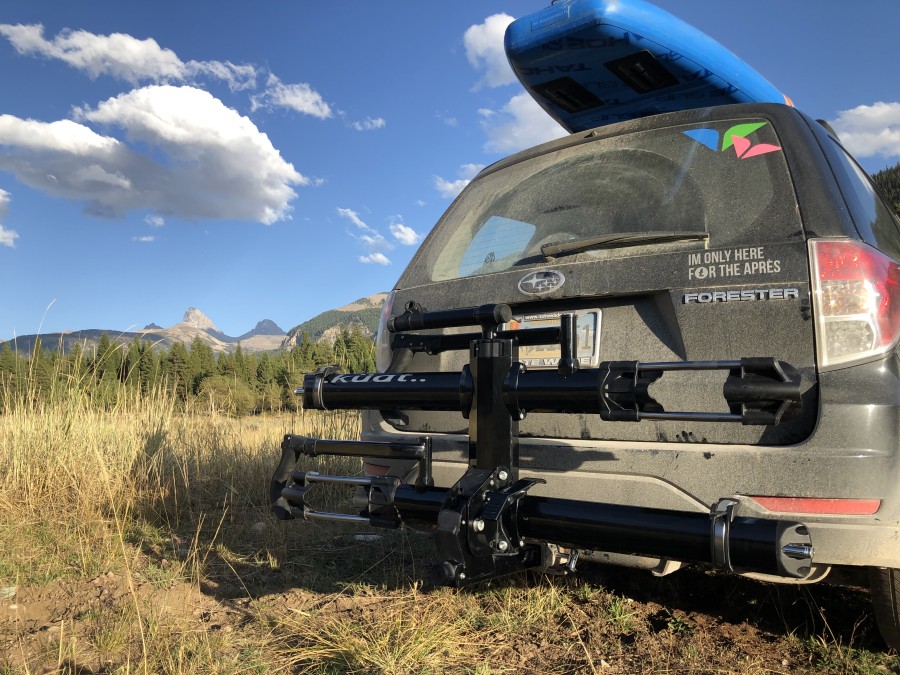 Seriously the perfect bike rack for any cycling enthusiast. The construction and materials are the best in the industry. Packaging was incredible and the assembly instructions could not have been more precise. Loading bikes on The Kuat 2.0 is a snap. I especially appreciate the locking feature of the bikes. The tightening bolt for the hitch does a great job of keeping the bikes from bouncing around while your on the road. If I could give the Kuat 2.0 six stars I would. I couldn't be happier with the quality and durability of this product.

Long shot. Any chance a 3rd gen Tacoma can open the tailgate with the rack tilted and not hit? It was mentioned in another Q/A that manufacturers don't recommend doing this. I would highly disagree. Thule, Yakima, and Kuat all mention the tilting function and why they provide it.

Is this rack able to adjust down small enough to accommodate little kiddo bikes? (Like 5 years old and under)

You simply get what you pay for. Engineered to every last point. This is a professional grade bike rack that dots the iâs and crosses the tâs.

... and the rack weighs about as much as one as well! Proper lifting technique or a helping hand is very much needed installing the rack when equipped with the add-on. But despite the weight, there are only upsides to rack. It's built super solidly, enough so that I took a nearly fully loaded rack on some light offroading trails and had no issues. The adjustment on the rack to get the perfect secure fit for each bike is easy and inspires confidence on those longer drives. Also, the trail doc is key for those pre-ride tuneups. The only other thing I wish this rack had is a front wheel lock, because even with the back wheel and frame locked down with the integrated cable lock it would be easy for a thief with some know-how to come and take your front tire in a matter of seconds. 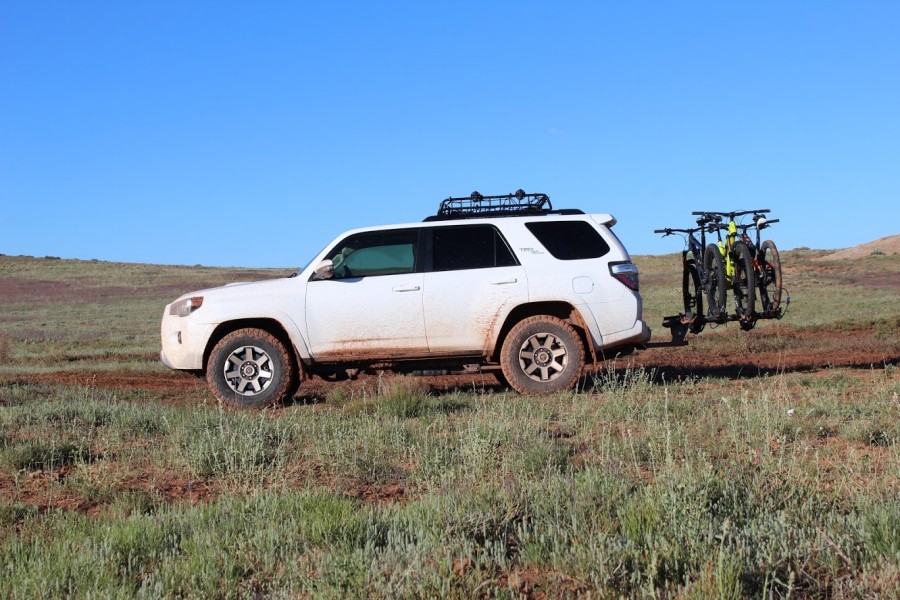 Does the rear hatch on your 4runner open when the bikes are tilted down? I'm looking for a replacement for a Thule because the 4Runner hatch hits the handle bars on my mountain bike.

Best thing going other than my bike.

I bought this a couple years ago from competitive cyclist and havenât been happier. Aside from just a hitch rack, the built in bike stand has been used over and over. The forward tilt is great for SUVâs. The locking cable is a tad short for two bikes but itâs not meant for overnight storage (my thoughts). Great rack. (Only four stars because of the short cable) 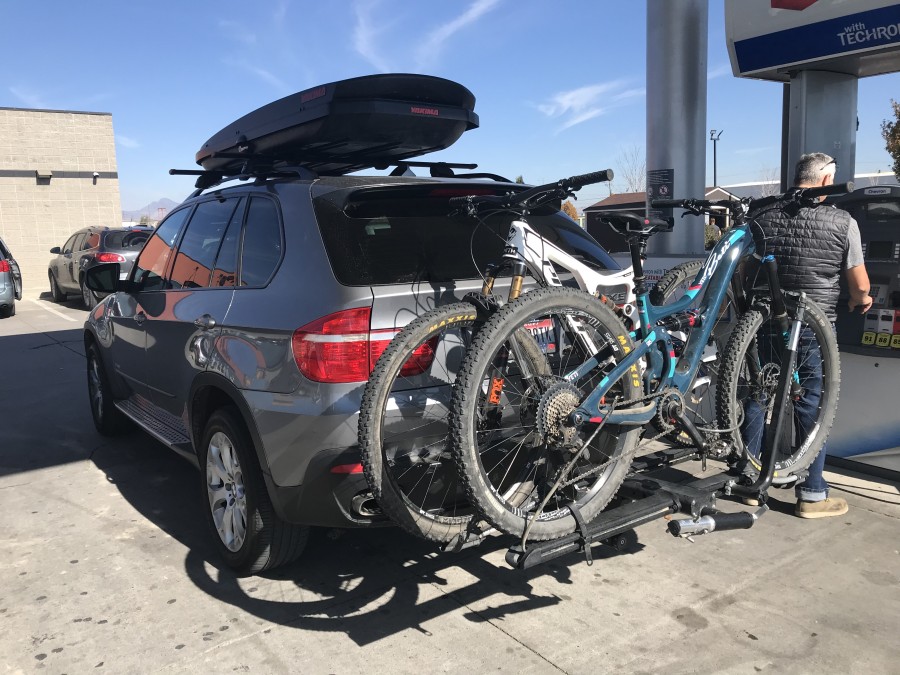 I loved the rack, the delivery was quick.

This is hands down the best rack on the market. It is very well built and keeps the bikes very secure. The downfall is the high price but it is worth every penny. I would certainly recommend 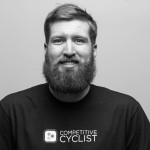 Best on the Market

AMAZING rack, couldn't be happier with it. Easy on and off loading for bikes of any size. Easy to adjust it so that you can get into the back, even when loaded down with bikes. Got sick of stacking bikes on the shell on my truck so this made life much easier. I would say the only downside was actually getting it hooked up, it's quite heavy. Though it's a bit on the pricey side, this is clearly the best on the market and worth every penny.

This rack is everything you can want. Durable, easy to use, good looking. Best of all, it keeps your bikes safe. If you care about your bikes staying safe and not being scratched, buy this rack!

I LOVE this rack! Very happy with it! My only current issue is that it isn't the best with my low-clearance fake-off-road vehicle. But it's awesome on the truck, and the swingarm that you can get is worth its weight in Gold (okay maybe not really, as the thing is really heavy, but you get what I mean). And the company has been awesome. One small part broke off, and with one quick email, they sent the replacement part free! 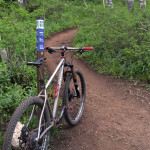 Pro: Built like a tank Con: Weighs as much as a tank Great construction, function, and looks. If you take your rack on and off quite a bit, you may want to work out, or choose a lighter rack.

Kuat quality and ease of use!

This is my third Kuat hitch rack I have owned in my life. I do not think twice about coming back to this company every time I am in the market for a hitch rack. Their racks are quality built from the hitch mount up to the wheel clamps. You feel how secure it is and do not worry about the safety of your bike. They easily fit a wide range of road and mountain wheel and tire sizes. The color and paint quality will stand up to years of abuse and wear items are easily replaceable if needed. You cannot go wrong with these for hauling your bikes around. You really get what you pay for.

This rack is super easy to put together and then put on your car. It holds the bikes sturdy and made it through the entire season and still looks great!