While most of Giro's cycling kit is designed to downsize the overwrought design elements that plague the industry, the Giro Strate Dure Supergel Gloves actually downsizes the bulk of its respective competitors. It's the cure for anyone who enjoys palm padding that eats up road vibrations but doesn't completely eliminate tactile feel between hands and bars. With their medical-grade padding, the Strate Dure Gloves let you feel the hoods without feeling the road.

The Strate Dure Gloves feature Giro's Supergel inserts in the palms. Supergel was actually designed for medical applications, so it’s definitely up to the task of nursing your hands through sections of rough road or trail. It's able to deform on three axes instead of the usual one, so it doesn't create pressure points. In fact, Giro claims that Supergel distributes pressure 300% better than standard gel padding. It also offers a 30% gain in impact resistance and no hardening over time. All of this, and it doesn't recreate the unwieldy bulk of typical padded gloves.

I'm very satisfied with these gloves. They fit well. Comfortable. Easy on and off. Good padding. Look great.

I allways use size L, so I ordered 2 pair of gloves on that size, but they fit snug and my hands start to feel numb after a couple of minutes on the saddle. The quality and the colors are great, so sad to give them away.

Comfortable, but not well made

Within less than ten wearings, the seam on the thumb has come apart. Otherwise, the gloves seem OK. I'm a little worried about the velcro, though. It's got the "micro" style of velcro and in the past, I've found that those lose their stickiness pretty easily. Having to deal with RMA and return shipping for a store credit of $35 is hardly worth the inconvenience. I'll just write this off as poor purchase and buy my next pair of gloves at my LBS.

Not for me - maybe someone else

Medium was a bit snug. Large felt better, but palm heel pad shifted to outside of hand making them unless for shock absorption. They seem well constructed though.

My step up to padded gel gloves

I have a pair of the Giro leather padded gloves and liked the way they fit and felt on the bike. These are an improvement and found they're excellent for longer rides or when rail-trail riding. Swap these out with another manufacturer's example. I prefer the Giro.

i ride 2-3 times a week in hot weather (florida). got these because i hoped they were similar to previous Giro gloves, since discontinued. they are terrific. comfortable, with good padding. i will note they feel very slightly smaller than the last Giro Large size gloves i had. but not enough to make me wish i had ordered a different size.

Pads you didn't think you needed

I had a basic pair of gloves and noted that pads of my hands (near wrist) were going numb during long rides (20-60mi). Purchased these and was immediately impressed on my first ride. First ride was 30 miles, no pain. A few days later, 60 mile ride, again no pain!!! What surprised me most was that the pad placement was perfect, both on the hoods and in the drops. Even padding between the thumb and index kept the ride comfy no matter where I placed my hands on the bar. Super pleased with the purchase. Size seems to run true. I'm typically wear a large glove and these have a comfortable fit and slightly on the loose side. Pros: - Pads placement where you want and didn't know you needed it - Nose wipe thumbs made of soft suede - No pain rides!!! Cons: - Velcro strap across the top of hand from the thumb base over the wrist - The Velcro barb base likes to fold over on itself and grab the shell of the gloves which may lead to wear

I recently took a nasty spill when I was cruising downhill and got a front flat tire. When I peeled myself up off of the pavement and looked at my hands, they were totally fine. The gloves really held up! You couldn't even tell they made any contact, and my skin was saved. In addition to being durable, these gloves have a nice snug fit, breathe well, and are comfortable (I think the gel is just right). They also seem to fit true to size. I purchased a large.

l'm a 60 year old disabled vet, my ortho told me the more I ride the longer my knees will last. l've messed up both my wrist from crashing my bike on trails, l've had 5 elbow surgeries, both shoulders including reconstruction on the right, right ankle tightened and left knee cleaned out. that being said, l want as much padding as I can get. these gloves cover that requirement, very well padded. the only reason I didn't go with 5 stars is they are hot. l'm in Florida and it's hot & humid and I ride everyday, and usually carry extra gloves to change into dry. l will buy another pair probably, just wish the back was a lighter material

Nice gloves. They say bright red, I say they are vermillion or reddish-orange.

Familiarity:
I gave it as a gift but have feedback to share
Fit:
True to size

I gave these gloves as a gift and they are used for mountain biking and they are great. The fit is extremely comfortable.

I use these gloves for road biking and mtb, after two years of use I am going to buy a new pair. Fwiw, had to have changed them about 6 months ago. 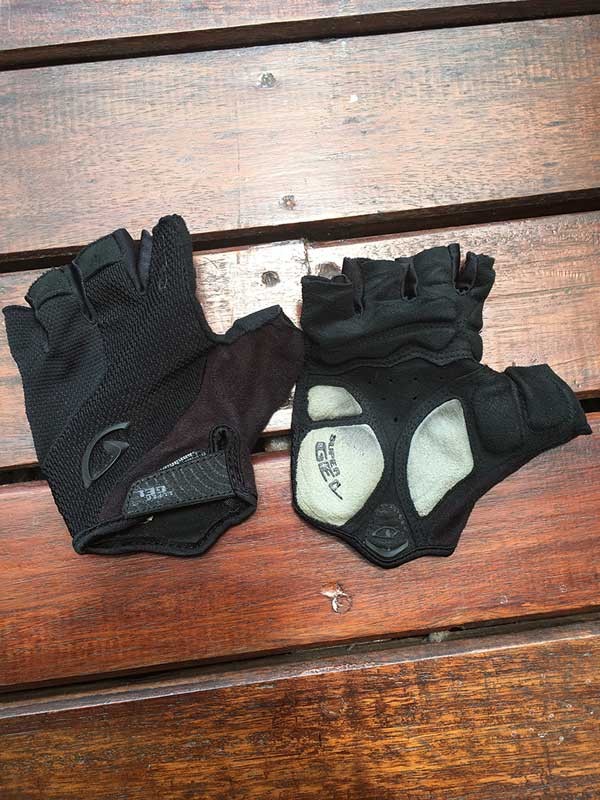 Thanks for the pic! Surprisingly, this is first pic I’ve seen showing the important palm side.

Unlike Giro Monaco gloves, these gloves do not leave black dye on my beautifully clean white bar tape. Saves me a lot of time, and the gloves are comfy as well.

great glove. but, they have a ton of gel in them. a bit too much even. Louisiana roads suck, but its not the Paris Roubaix cobbles. I feel like I could get away with less gel. But, they work as they are supposed to. My first pair had a rip in the stitching. One call to Giro, and they sent out a new pair that arrived in a few days. Great customer service.