Light isn't good enough anymore. While the Easton EC90 Setback Seatpost is certainly one of the lightest posts on the market, it's also designed to last. To be direct, it's designed to be both tough and light. Increasing the toughness doesn't begin with overbuilding it but instead, recognizing the enemy of longevity -- impatient bike mechanics (you or your local shop rat). It happens when someone slams a seatpost clamp shut rather than taking the time to back off the fine-adjust nut on the opposite side of the clamp lever. When you overzealously clamp a carbon seatpost, you risk overloading the "pinch" zone at the back of the post, where the seat tube is cut to allow it to flex and clamp the seatpost. Too much clamp force narrows the focus of the clamp on this one area.

To avoid any possibility of mashing your EC90 Carbon Seatpost, Easton came up with what it calls Relief Area Design, RAD for short, and you'll see it deployed on the brand's seatposts as well as steerer tubes on their forks. RAD works by simply eliminating material at the zone where that imbalanced force would normally pinch (this is the flat edge you see on the back of the seatpost). This helps to spread the clamping load more broadly across the circumference of the tube.

Easton's EC90 carbon is of course their top grade, and the material is even used on both the upper and lower plates of the clamp assembly where it attaches to the seat rails. While "full carbon" posts are increasingly common, Easton uses a very stable, two-bolt clamp design that echos one of the most venerable posts ever made, the Thomson. Both rely on long clamp zones and highly adjustable through-bolts.

First, the finish of this mast is top notch. I like the two bolt design also. Unfortunately, I cannot recommend this mast because it is not compatible with either saddle I tried. It seems that only round seat rails will work, so if you have a saddle with oval/carbon rails check compatibility before you buy.

This is my first carbon fiber seatpost, so I can't compare it with others, but here is my opinion based on about 200 miles of usage and 5 demo saddles. 1. Very clean looking with hidden recessed bolts. 2. Very light weight. 3. Takes some practice to install a saddle. The bolting mechanism is tricky and when installing a saddle, it often causes the nut on the seatpost clamp to rotate, which causes the bolt to not seat into the nut. Thankfully my saddle has a huge cut out, though which I could use a small screw driver to orient the nut correctly and tighten the bolt with the other hand. 4. After some practice, you'll realize that (3) can be prevented by loosening the bolts 95% (allowing them to be still threaded to the nut, just a little bit) and sliding the lower half of the clamp out, when removing/installing a saddle. 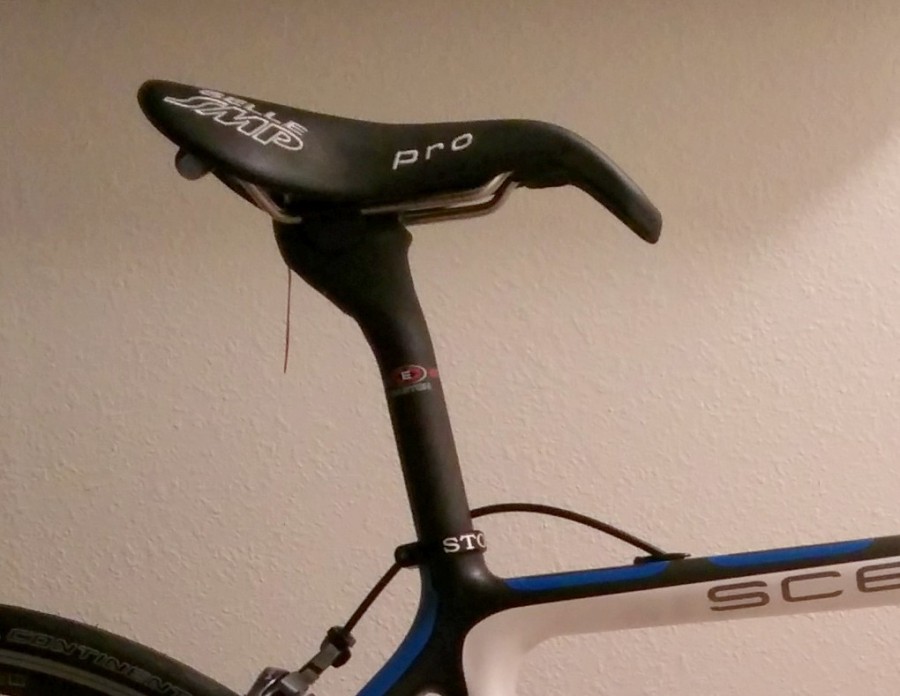 couple questions: what is the offset? ...

couple questions: what is the offset? pic look like 15mm, description reads 0mm. what is the weight of the 27.2 x 350mm?