If there's anything that can immediately spoil the luxurious feel of pedaling in Assos bottoms, it’s the addition of ill-fitting, thigh-pinching knee warmers. The hK.laalaLaiKnickers_S7 eliminate knee warmer issues altogether, extending the targeted compression and gloriously dialed fit of the T.laalaLaiShorts to a 3/4 length ideal for cycling in the 50s and overcast rides in the low 60s. No warmer droop, no layering, just the quality construction and signature fit you've come to expect from Assos. Instead of the T.lalaaLaiShorts' half elastic/half silicone grip hems and magnetically connected bib, the hK.lalaaLaiKnickers incorporate elastic cuffs at the bottom and a wide, unrestrictive band at the waist.

It took the company six years to design the men's S7 line, and in the seventh year, it comes to women, too. And it didn't come alone. It's brought with it a host of features that were pioneered in the men's S7 line but have now been refined for women. Like the shorts of the same name, the hK.laalaLaiKnickers are made of the same type.439 material used in the men's T.equipe and T.cento shorts. The material is laid out in a pattern designed to accommodate a woman's body in the saddle with a more comfortable, regular fit than the T.laalaLaiShorts, but the type.439 material still provides the same functional benefits as it does in the more race-oriented shorts.

Specifically, the material is breathable, moisture-wicking, and quick-drying. All of which are obvious and, at this point, just assumed features. The material's real shine lies in its compression, which Assos engineered to provide an asymmetrically compressive hold that stretches more around your body rather than vertically. While unmediated, all-way stretch is a nice element for general comfort in cycling shorts, Assos' targeted, direction-specific stretch ups the ante by balancing compression, yield, return, and support for a cycling-specific application. This balance allows uninhibited pedaling while further reducing the fatiguing oscillations caused by road noise vibrating through the muscles of your engine.

As the first women's knicks in the S7 line, the hK.laalaLaiKnickers also introduce lady racers to the joys of the purple chamois. As with all of the S7 collection, the insert rocks Assos' new amethyst color, a purple hue chosen to pay homage to the clothing of Roman emperors, English monarchs, and members of the Japanese aristocracy. The chamois is designed according to the same philosophy of progressive support that informs the men's amethyst inserts but with a topography specific to female anatomy. The material's high stretch, high return properties allow it to compress and expand in coordination with the surprisingly complex pattern of movement that pedaling produces in the ischial and perineal areas. This effectively "fills the gaps" that other inserts leave during a pedal stroke, reducing the number of instances when the skin in these sensitive areas separates from and reencounters the chamois surface. The result is less chaffing, because the chamois moves with your skin rather than independently of it.

Assos also rethought the way a traditional chamois is attached to the shorts, developing yet another avenue to help reduce friction and irritation. This led them to what they are calling the goldenGate, which involves interrupting the stitching along both of the chamois' side panels, allowing a more "three-dimensional" freedom of movement in this sensitive, rotational area. But if that weren't enough, Assos went ahead and extended the chamois' thinly-padded sides over this short-to-chamois junction, making the transition against your skin as smooth as possible. Obviously, there are some elements of chamois construction that aren't needed in women's kit — we're looking at you, kuKuPenthouse — the women's S7 insert incorporates virtually every innovation that made the men's equivalent so popular with the Y chromosome crowd. 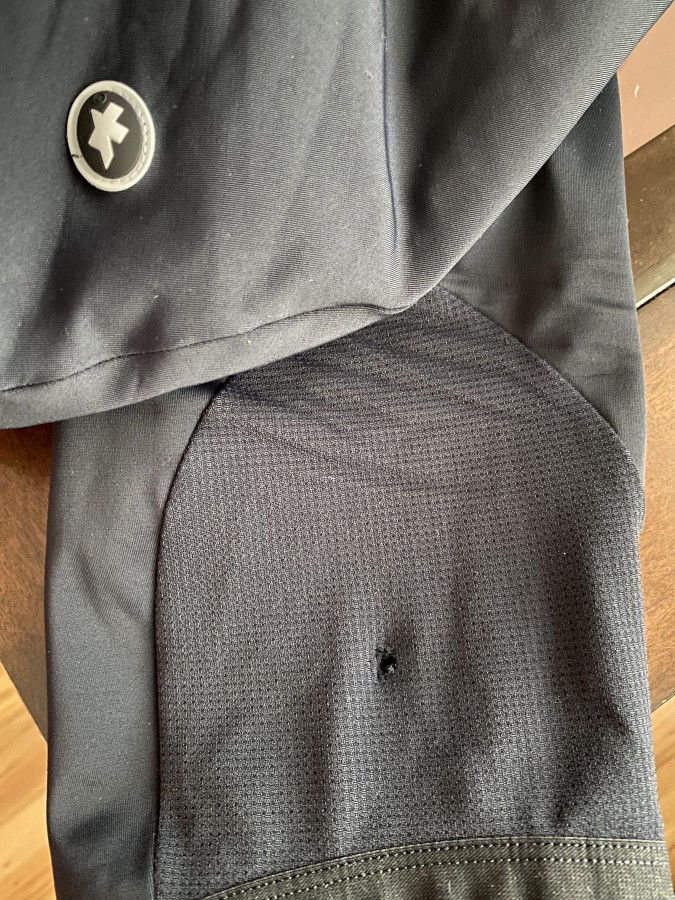 I have the Assos shorts in this exact style and the size small fits great...just a little work to get on, nicely compressive once on and they stay in place. I thought these knickers would fit the same so ordered small. They were super easy to get on and it felt like they were going to slide down. The waist was loose. The quality is very good and if they had fit like the shorts, I would definitely have kept them. I may order them in XS though I fear they will be too tight.

I am normally a size 4 or 6 in the US conversion of Italian or French made clothing. I have a pair of the size M long “tights” (I forget what the technical term is) made by Assos, so ordered M in the “knickers”. Well, the waist/hips works (anything smaller and you are popping seams to get the item on), but the part that should fit snuggly against my calves is too wide—I guess if you are an M in the waist/hips for Assos, you’re supposed to have thicker calf muscles. YOu’d think they would have designed the material at the bottom so it could have more leeway in the fit.