55
5 out of 5 stars2Reviews
Fit Guide
Geometry

If we said that it took some convincing for disc brakes to start grasping a hold in the peloton it would be an understatement. It was a bit more like pulling teeth with the pros, but for most riders, it doesn't take more than a day on discs to understand its benefits, which would explain why we've been seeing more disc-equipped bikes making their way first through the finish lines first in professional races. So, it should come as no surprise that Ridley's Fenix SL DiscRoad Bike Frameset is ready to tackle your most demanding rides be it over smooth roads or slick cobbles. It offers a stiff unidirectional carbon layup to transfer maximum power while soaking up vibrations from rural chip seal county roads, while its race-ready geometry doesn't forget that speed is an important element in having fun while you're out there. When you consider that Ridley hails from the capital of hard classic riders and races, you quickly realize that you have an able partner when giving it your all on your most heroic rides.

While this Fenix is more than capable in Flandrian sprint finishes and animated road race tactics, its combination of powerful disc brakes and artful layup of vibration devouring unidirectional carbon fibers expand its capabilities beyond buttery smooth pavement into roads (and paths) less traveled. In comparison to the super-stiff featherweight frames in Ridley's line that use up to 60-ton moduli, the Fenix SL utilizes a blend of 30-ton and 24-ton carbon to strike a balance between road-smoothing compliance, rigid efficiency, and race-worthy weight. Poorly graded gravel, cobbles, and other road hazards that would otherwise feel like jarring punches on a 60-ton carbon take on all the disagreeability of crosswalk paint, though the stiff, tapered head tube does provide responsive steering to dodge unrideable obstacles and skillfully dissects a winding canyon road.

Compared to the original Fenix, the Fenix Disc also has a slightly bigger wheelbase, measuring 2mm longer for a size medium. While this difference is more pronounced in the smaller sizes, even the bigger frames benefit from a more stable footing over packed gravel and tamer dirt roads. The adventure-minded cyclist will also appreciate the Disc model's increased tire clearance, allowing for bigger tires and maximum plushness and reliability on everything from epic rides over baking summer asphalt to winter base miles over slushy roads.

I have several race bikes that yield a stiff ride. I'm a big dude and after 70 miles on my BH G7, my body was taking a beating. I was looking for something that would cushion the road and allow me to enjoy longer rides without giving up too much performance. I became interested in this bike because I heard that it was used on the cobbles - and it often wins. Well, after researching the frame, I also saw that it was a favorite of Dan Lloyd of GCN. I mean - I'm an older guy but I still want to ride a steed - not a sofa! I bought it and built it up with Ultegra Di2 and Reynolds AR 58/62 X DBs. I love it. I describe it as the spawn of a ballon and a rocket. It's plenty fast, yet extremely compliant. Just what the doctor ordered! Fun to ride, good handling, fast, and comfortable. You might not like my setup - but it does turn a lot of heads. 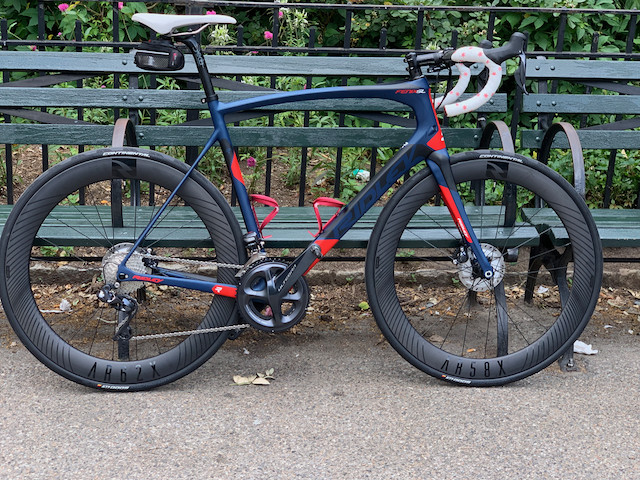 What is the widest tire this frame will accept?

I read a review that says it will take 30mm tires.

This is a simply excellent bike.

I honestly can't fault this bike. The quality of frame construction is incredible, the paint is absolutely flawless (and looks very fetching in real life), the ride quality is sublime, and the whole bike is oozing with common sense. The biggest impression I got while riding the Fenix SL disc was that Ridley knows how to make really, REALLY smart bikes. They didn't use any silly axle standards, integrated/proprietary cockpit 'solutions', and they didn't abandon everything in the same of light/aero. This bike is simply very comfortable, very stiff under power, and presents incredible value. I would take this bike over a Dogma F10, especially when you consider value. Of course, this takes into account the fact that the Fenix SL is much more reigned-in in terms of handling (they're not really comparable bikes), but the point stands. The Fenix SL is the 'buyers-remorse-proof' bike. For the same money you'll spend on the aforementioned Pinarello (or Factor, or Wilier, or Bianchi), you can have a Fenix SL with a better build kit, that will ride better, and cost you less. Feel free to contact me directly at jdraper@backcountry.com if you have any questions!

I read Joe's review and, frankly, didn't believe him. I emailed him and we exchanged some communications. I wound up buying this bike. See my review.