Lift laps and shuttles have a time and a place, but that place isn't anywhere close to your summer agenda. You prefer fast rolling cross-country hot laps, and opting for the steep, sanity-questioning climbs to get you to the top before your buddies have even made it through the lift line. Pivot's engineers designed the Mach 4 SL Carbon Pro X01 Eagle Mountain Bike for those of us who are of the pedal-your-own-way persuasion, with a featherweight construction that's stature is anything but, offering stiff control and power that scales in at a whopping 300-grams below the previous Mach 429 SL. The new Mach 4 SL takes queues from the venerated Mach 4 and 429 SL, bringing the 4's lightweight and nimble attitude to the trail, plus the SL's progressive cross-country tuned setup for soaring to the front of the pack, gliding over slick root gardens, and charging forward to earn your spot as the KOM.

Speaking of pedaling platform — if you're familiar with Pivot's Mach 4 and 429 SL, you may be looking at the rear triangle with a puzzled gaze, as its shock layout shifts tremendously from its predecessors. While the Mach 4 SL still carries on with the coveted DW-link, Pivot's designers opt for a new vertical shock layout. This allows a more compact frame design that uses less material in order to shed weight, and improved integration for Fox Live Valve, should you opt to upgrade the rear-end. This new shock layout offers 4-inches of supple suspension, ideal for gobbling up variable trail terrain, and quieting harsh chatter on the straightaways. Much like DW-link applications you've seen before, the vertical layout still offers phenomenal small-bump compliance, keeping your tires glued to the trail for traction control as you soar up climbs, and a plush mid-stroke to take up the impact when you thought you could turn those two rollers into a double, but ended up taking things a little too far, and landing in the flats.

Pivot employs the X01 Race build with a well balanced bushel of components, including SRAM's X01 Eagle drivetrain, and Shimano's XT brakes. This setup brings you a whopping 12-gears in the rear, so you've got just the gear you need for blasting past the competition on the straightaway, or offering your knees a bit of respite on a particularly grueling climb. The build is paired up with DT Swiss' M1700 hoops for quick-rolling power, and a 36-tooth star ratchet hub that offers near instant engagement to propel you with rocket ship levels of thrust. Fox's Factory suspension is utilized in both the fork and the shock to give you buttery-smooth Kashima-coated stanchions that soak up rowdy terrain and chatter, plus a remote for quick adjustments to your suspension while you hammer out the miles.

I’m interested in the Pivot Mach 4 SL but do not know what size will fit me best. I am 67” tall with a 31” inseam. Please let me know what size I should get. Thank you.

Hi Ron, Excellent question, according to Pivot bikes recommendation chart you be on a size small. Small: 5'4" – 5’8” Keep in mind that this is a recommendation and that your preferences and riding style can also factor into what size bike you may prefer. You can reach out to me directly at 801-204-4671 if you have any questions.

If you have never owned a Pivot, they pedal amazing well and this one is no different. The suspension is firm as should be expected but still absorbs the roots and rocks just fine. I was on the line between a small and medium. The small was a great choice since the wheelbase is similar to the Mach 4 Carbon it replaced. It handles the tight Ohio trails just fine. Don't box this bike into the race category though, it performs very well as a light weight trail bike. It's primary limitation is only the tires if you want to go into BRRAAP mode. FWIW, my build weight with pedals, Wahoo and Aspen tires is 25.06 lbs. EDventure 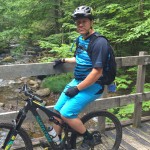 I took this bike out for a big day here in the Wasatch Mountains of Salt Lake City, Utah. Kitted out, this bike matched not only my lycra attire but my inner ethos focused on speed, fitness, and fun. On the uphill, this bike pedaled better than any bike I have ridden. While a hardtail may be fast, the suspension on this bike makes it compliant on the uphill tracking over roots, bumps and rocks to provide a faster xc bike. At the top, I was curious how this bike would shred. Loads of flannel wearing, goggle donning enduro riders were shuttling the ride I had just ridden up and I pointed the bike down and just shot it. Like skiing powder in the winter, I felt like I was surfing through turns, in and out of pristine mountain single track. Launching of roots and rocks, the bike allowed finesse that a bigger traveled bike would have dampened. In short, I loved the way it rode uphill, but couldn't believe the way it was going down. For the riding I like to do, which is a combo of being fast and fun, this is the bike for me.

The past 24 months have been good for XC bikes. With the release of the new Santa Cruz Blur, Yeti SB100, Intense Sniper, Trek Topfuel, and Specialized Epic, it's become abundantly clear that the lycra-inclined among us are ready to throw down the gauntlet and face up to a gnarlier, rougher, more rad XC reality. The Mach 4SL's DW-link suspension is its party piece. This bike pedals better than the Blur or the SB100, and it impressed on the way down as well. Pivot's DW bikes truly do not exhibit brake jack! Compared to the Blur, the 4SL was slightly less predictable on rough descents, but it was extremely impressive in low-speed technical sections. I'd have to give the Blur/SB100 the advantage when it comes to descending, but the 4SL is definitely more efficient. Please reach out directly if you have any questions!

With ability to ride many different bikes, do you still think the Mach 4 is the best super light and quick trail bike on the market? I live between the Appalachia mountains and the Atlantic Ocean. I have multiple types of terrain and trails, including rock gardens. I do not want a too long and too low bike that eats pedals and cranksets, unless I spend more MONEY on a new short crankset. Thank you.

I can't comment on this bike specifically, but Pivots don't tend to have an ultra low BB heights. I have a Trail429 for reference and there is a hi/low geometry setting . Pour over the geo charts online, and buy crank boots like race face or AMS for protection. Also pedal choice xc type clips have a small surface area and are less likely to get hung up. If you ride flats go for quality plastic pedals, like Deity Deftraps, One Up, etc.. as they slid over rocks better than metal. You can even remove the outer pins for more slide. Hope this helps. I grew up riding the east coast so I know there terrain you're talking about. Cheers

Gearhead I am ditching my old bikes, Truck and Cannondale, as they have seen better days. I am looking at the Pivot Trail 429 Pro XT/XTR. How would you say this bike, the Pivot Mach 4 listed above compares. I am primarily riding Trails with plenty of vertical but I will not be in rock gardens or making big jumps as I am getting older. I do however, want a very capable bike. Thanks