Transitioning from lift laps to your favorite trail system usually means making some compromises in your fork's performance unless you've got the time and tools to fiddle with tokens at home. MRP's Ramp Control Cartridge looks to take the hassle out of ramp-up adjustments, replacing the token system for on-the-fly bottom out control that lets you adjust to the current terrain.

The Ramp Control Cartridge replaces the top cap and token assembly of current generation Rock Shox Pike, Lyrik, Yari, and Boxxer World Cup Solo Air forks. It takes up about the same space as a single token for similar ramp up when it's wide open, and adjusts from there for additional bottom-out support with 16 clicks of adjustability. This adjustability only impacts the end of the stroke, so you're able to maintain a supple initial feel and overall behavior of the fork with the damper and air pressure while tightening down big-hit capability as much or as little as you need.

Nice to know it is there

Agree with some others, haven't used it a ton just yet, but it is nice to know I can adjust my Pike based upon the needs of the trail. I dialed it in for our typical trails in Park City, but don't use the adjustments enough when traveling. Overall it is a great value, very easy to install and adjust. Worth adding to your bike.

Will the MRP Model B work with the 2019 RockShox Lyric?

Haven't used it a ton yet, but nice option when you don't want to switch out tokens all the time, gives you yet another option to dial in your fork. Installed on a Fox 36.

This thing is awesome. It totally changed the ge way my fox feels and responds. Its definitely worth the money.

Well worth the price

This is definitely for someone who likes to make adjustments to their suspention based on the trail or trail conditions they are riding that day. The set it and forget it type rider may not get the value out of the product, but if cost is not an issue still worth buying to find that setting you prefer. I have seen riders carry tools and volume spacers to adjust their forks on the trail, with this you can accomplish the same in seconds with a few clicks of a dial. Again if you like to tweak your suspention you need this in your life.

I have a 2016 OEM Fox Rhythm 34 with 120mm travel and Grip dampener. Which version would be compatible with this fork? 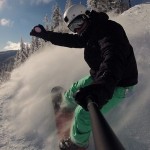 How to Install the MRP Ramp Control Cart

How to install the Ramp Control Cartridge in Fox 36 forks, converting the stock air spring into an independent positive and negative chamber arrangement.

This is a short video showing you how to install the MRP Ramp Control cartridge. One of our partners performed this installation on their own fork which is the Rockshox Lyrik. The Lyrik uses a Model B (or D) cartridge.

What cassette lock ring tool is necessary for installation? I'm having some trouble finding the required one because of how frustratingly different bike standards are.

Hi Al, Nick from MRP here. Here at the factory, we use the PARK TOOL FR-5.2 CASSETTE LOCKRING TOOL when installing these in drop by customer's forks. Competitive have the Abbey Tools which are top notch: https://www.competitivecyclist.com/abbey-bike-tools-single-sided-crombie-tool?skidn=ABY0002-CAM-ONESIZ&ti=U2VhcmNoIFJlc3VsdHM6Y2Fzc2V0dGUgdG9vbDoxOjU6Y2Fzc2V0dGUgdG9vbA==

On the fly adjustments

For the people who nerd out about their suspension (like me) this thing is awesome. The whole concept of "bottomless tokens" was started to be able to tune the volume of the air chamber in order to add progressiveness to the suspension, which allows for lower pressures and increases small bump compliance. I was always a fan, and loved using bottomless tokens on my Pike fork. Got this cartridge, and now I absolutely love to change the progressive feel of my fork on the fly, I have even found myself doing it on different sections of my local trails where i know there will be rockier or smoother sections of trail. An absolute must have for any Pike, Fox 32 or Fox 34 fork, and they just released a model for the 36!

This new cartridge is amazing. Why deal with changing out tokens, when you can just simply turn a dial while out riding. You can really dial in your suspension with this thing. For those hard and rough days, take a little pressure out and bump the cartridge a few clicks and rip it. This is a must have every time. Super easy to install. Takes no more than 5mins to do and you're good to go.

A standard feature on MRP's Stage and Ribbon forks, Ramp Control has been available to those of us running their forks for a few years. As such, I've been using Ramp Control for some time now, and am excited to help offer it to the masses! It provides on-the-fly bottom-out resistance adjustment so you can use your well-earned trail time for riding instead of tuning in the shop. It also only affects the end stroke, so you can maintain suppleness off the top and traction in the mid stroke instead of having to readjust all of your PSI and damper settings. The ability to change bottom-out resistance without impacting the entire spring curve or having to compensate damper settings is pretty neat. You're able to isolate big hit performance from the rest of the work your fork is doing the other 95% of the time. It's especially useful in places, like here in Utah, where the same ride can include miles of dirt ribbons through aspen forests briefly interrupted by waterfalls of rocks strewn down a cliff side. Contact me to chat about your suspension needs or to request installation of Ramp Control on your new bike! 801-204-4556 araines@CompetitiveCyclist.com 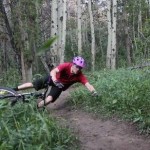