Forget cramming four bikes onto a hitch-mounted, hanging-style rack when your vehicle's equipped with the incredibly easy-to-use, well-bolstered Yakima FourTimer Hitch Rack. Alleviating many of the problems inherent to hanging-style hitch racks, the FourTimer uses offset cradles with secure-ratcheting straps to prevent bikes from rubbing and bumping during transport. And because it's designed with a releasable outer arm, the FourTimer quickly transforms from a four-bike carrier to a two-bike carrier in seconds, allowing you to customize the rack's carrying capacity for regular trail rides and family road trips alike.

Its custom tire trays work with virtually any bike up to 45 pounds, regardless of wheel size or width, even carrying wide-fender cruisers and fat bikes with massive 4.8-inch tires. Plus, you'll appreciate the rack's padded arms, which safely secure over your bikes' top tubes without scratching or chipping away paint. And when you're done riding for the day, crack open a frosty beverage with the integrated bottle opener.

This hitch-mounted bike carrier works with 2-inch receivers straight from the box, securely locking to your receiver with the included SKS (Single Key System) hitch lock. And since it uses Yakima's SKS locking system, you can easily swap out the key core with sets of two, four, six, eight, or ten SKS lock cores (sold separately) for one-key access to all of your Yakima racks and accessories.

Offering maximum convenience when you're road tripping and traveling, the FourTimer Hitch Rack folds down with bikes loaded for easy-access to your vehicle's trunk or rear hatch. Moreover, you'll appreciate the rack's fold-up functionality when it's not in use, making for easier backing up and parking without worrying about clearance issues.

I am careful with things I buy especially when I rely on them to perform in support of the fun things you do when using a bike rack. The clips that secure the straps are terrible. They break. First one broke on me shortly after buying it and I figured I did something wrong and ordered a $35 replacement part despite breaking only a kind of small clip. Crazy! But when you look at the part, the problem is in the design. The clip attached with a single rivet biased to one end. The other end is subject to leverage should anything get caught on the clip and that leverage breaks the clip. Well, even crazier is that another clip broke before the replacement part even arrived. It is breaking quicker than I can repair it. I figured this is bad and Yakima will certainly do something to make this right. No go. Well, I guess they provided me with two replacement brackets but it seems quite likely that the clips will break again soon. Will likely end up in this endless loop of parts during whatever the warranty period is and then I will be out of luck. Not a good product and not good resolution under warranty. Choose a different rack. 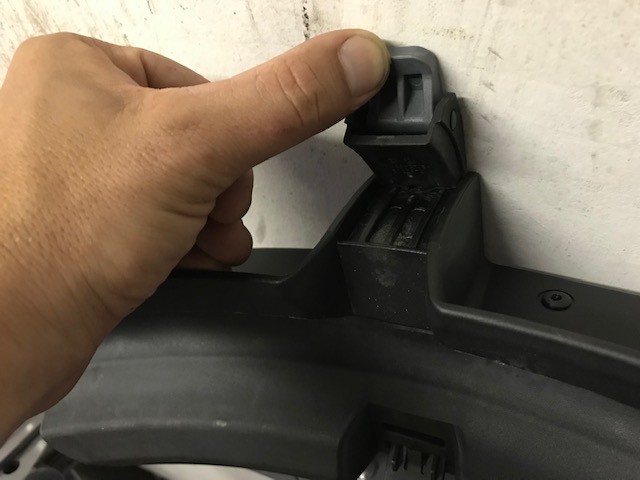 I wanted to love it

I seriously wanted to love this rack, so so much. While Yakima isn't an underdog by any stretch of the word, their hitch bike racks really are. Brands like Kuat and even Rocky Mounts have a better market share for high-end racks. So when I saw this Fourtimer, which holds twice the number of bikes at the same cost? I thought, why not? Sign me up, I can root for the 'underdog'! I was wrong. On paper, this rack looks great. Its capacity of four bikes is amazing for the price, and it even has locks included (which is rare for Yakima). However, in practice, this is one of the more annoying racks I have ever had to deal with. First of all, lowering and using the rack. The rack has a "safety pin" at the bottom near the hitch mount that has to be inserted and removed to lower or raise the rack itself. While this doesn't sound like an issue, it's just plain annoying compared to most of the other options on the market. Let's say I want to put groceries in my trunk. Well, I will then have to remove the pin, lower the rack, put groceries in the trunk, raise the track, and put back in the pin. Repeat when I get home to take them out. Never mind groceries, you are going in the backseat instead! Combine that with the fact the pin is incredibly hard to remove, and its hard to justify over the simple handle systems that other companies have. Second, the towers that hold the bike's frame. In short, they are really badly designed. Not only are they not that secure even after tightening (they make the bikes sway forward and back on the rack itself) but the design on how they hold onto the frame is bonkers. Lets say you have two mountain bikes that are similarly sized. If you look at the picture, you would think that the hook would be long enough to still hold the front bike in place, right? Well, that's what I thought too until I tried it. What ends up happening is that the bike in the second position is perfectly secured in place, while the bike in the front position is not at all. That hook just simply too far up on the post (and blocked by the bottom hook to go down any further) to actually secure the bike. Like, did they test this thing with real bikes? No idea. Third, the overall quality. I'm just gonna say it, it's really bad. I've had this bike for three months, and its already falling apart. One day I was commuting to work, and I noticed the ladder ratchet had fallen off the wheel tray. I didn't hit anything, I wasn't even using it. It just popped off. Shenanigans. So, in conclusion, go another route. It may suck putting $800 bucks into a rack, but if you are putting $10k+ work of bikes on the back, its more than worth it. I am only three months into owning this thing, and I am already trying to find a replacement.

After reading tons of reviews and doing research on the best bike racks I thought I was going to be disappointed by getting what may be considered a budget rack. However, the fourtimer is super solid construction and high quality. It comes with a hitch lock which is a big plus. Many of the other brands don't, or the ones that do cost twice as much. It take one bolt to convert from four to two, or two to four bikes so it is easy to downsize the rack if you don't need all four slots all of the time. There is a bit of play where the hitch mounted part of the rack connects to the hinging part of the rack, whereas other higher prices options have a more stable overall feel, but I am ok with it. It is minimal and I don't anticipate it being a problem. Out of the box it took about 15 minutes to install: putting in the hitch, putting on the hitch lock, connecting the first two bike holders , then connecting the other two bike holders. There are a total of five bolts required for the install and is totally doable with one person. I wouldn't hesitate recommending this to someone who doesn't want to spend $1K on a bike rack.

i bought the 4 timer, although i detached the extension piece and had it set up as a 2 timer for most days. after some light use (couple of times a week for about a year), plastic strap attachment on the wheels trays have broken off on 3 of the total 8 trays . to make the matter worse, it is designed so that the plastic strap is not held down by a screw, but is molded into the plastic carrier. in essence, i would have to purchase 3 replacement wheel trays. this is supposed to be designed for robust use, but that is not the case at all. it is also very difficult to adjust the wheel trays; they are often stuck, and brute force to move them are sometimes necessary. all in all, i would not purchase this again.

Solid mount. Easy to get bikes on and off. Holds bikes securely. Nice to remove two mounts when only carrying one or two bikes. It would be nice if it came with a cable lock. Great value.

Great hitch rack for all bikes

I wish there were more options like this. Trays are a must and having the mast grab the frame instead of the wheel allows for use with fendered bikes (in Seattle that is any bike that gets ridden regularly). Works with road bike with fenders, full sus trail bike, anything. Secure enough and pretty easy to set up. Doesn't have cable lock for the bikes, but that is a pretty easy add, and it has a loop to facilitate. Also easy to set up just for two bike (which allows my rear hatch to be fully functional - when set for 4 there is some interference when opening hatch) Great rack value and super fast free shipping (and no tax) makes for a great deal.

I like it!it's comfortable and durable to travel with your bike

This is not as beautiful as an NV, but I needed something to fit 4 bikes and didn't require me to sell some organs on the black market. For that I'm happy with this Yakima Rack.