With Mario Cipollini's retirement in 2008, the tifosi, and cycling fans as a whole have patiently waited for an heir apparent to the flamboyant Italian. And although their cycling careers had some overlap, Flippo Pozzato seems most likely to have carried the torch with his style and palmarès in the same league as the Lion King. Both have stage wins in all three Grand Tours, a national championship, and the monument that every Italian boy dreams to win, Milan-San Remo. Pippo has certainly achieved great success during his career and then there's his on-the-bike fashion sense including an extensive custom Sidi shoe collection and one-off painted Wilier framesets. Last season we saw Pippo sporting a beautiful Cromovelato Azzurro Cento10Air that deviated from his teammates and this season, Pippo has been spotted on a beautiful copper colored, known as Ramato, Cento10 Air Disc, a finish that harkens back to an era between the 1940's and 80's when Wilier-Triestina steel frames were copper plated. We've gotten enough miles in on the Cento Disc to know that it’s a very special bike and if you're looking to find an even more exceptional version, go like Pippo and opt for the Cento10AIR Disc Road Frameset in Ramato and become the envy of any cyclist that sees you on the road.

What we love about the Cento10AIR Disc is that it proves that disc brakes on a road bike and aerodynamics aren't mutually exclusive. Newer, updated aero development makes its way onto this disc version's tube and fork shapes and it helps achieve a claimed 8% increase in aerodynamic efficiency over the previous rim brake version. It's good to know with all that newfound speed on tap, powerful disc brakes can help you rein in the speed on a high-speed descent and isn't nearly as fickle if the weather conditions are less than idyllic.

The Cento10AIR Disc is an aero bike through and through but it doesn't detract from the fact that it is also an excellent all-arounder, perfect for the needs of a classic specialist like Pozzato. It developed the tube shapes based on NACA low-speed algorithms, in particular, Kamm theory which dismayed the "thinner is always better" approach to building aero tube shapes and is responsible for Kamm tails on many popular modern aero bikes. The benefits of the truncated tail are numerous, namely dropping weight while improving aerodynamics and boosting torsional stiffness. At the fork, a greater gap between the crown and the tire, afforded by relocating the brake caliper from the fork crown to the backside of the non-driveside leg, greatly reduces turbulence, thus smoothing the airflow.

Included with this frameset is a custom carbon monocoque seatpost from Ritchey with 22mm of setback. This post works in conjunction with the frame helping reduce road vibrations and providing a more comfortable ride. The shape of the post is unique as it has to fit inside the aero seatube and is developed to reduce turbulence as air flows by. Anchoring the post in place is a sleek seatpost clamp expander sitting stealthily at the toptube/seattube junction hiding it from the wind.

Underneath the copper, the material might not be steel like it once was, but instead a matrix of modern composites that allow this frame to exhibit a responsive ride that soaks up road imperfections while not troubling the scales, or you, that much. The Cento10AIR Disc relies on 60t Mitsubishi high-modulus carbon fiber for lateral stiffness in critical areas. The 'T' in 60t refers to ton, as in it can withstand 60 tons of pressure per square millimeter. T800H and T1700SC carbon are used in areas where a more elastic characteristic is desired to help smooth the ride. By using specific carbon in different areas of the frame, Wilier is able to customize ride feel and build the lightest weight frame possible.

This frameset utilizes internal cable routing, which is compatible with both electronic and mechanical drivetrains. The routing keeps cables and housing contained within the frame for clean lines and improved aerodynamics. When utilizing Wilier's Alabarda bar/stem combo or the Stemma and Barra system and an electronic drivetrain, the housing can be routed directly through the stem and headtube so no housing is visible, creating a very clean and aerodynamic look.

The Cento10AIR Disc's beefy bottom bracket helps improve power transfer under heavy accelerations, so if you're 200m from the line or trying to create a gap midway up a canyon climb, the power comes on instantly. A PressFit BB86 bottom bracket shell allows a cup with bearings to press in spanning 86.5 millimeters improving stiffness over the usual 68-millimeter shells. With adapters, BB86 accommodates cranksets from Shimano, SRAM, and Campagnolo. Additionally, it provides more real estate at the downtube/BB junction for a more responsive frame and increases tire clearance up to 30 millimeters on this model.

I had previously been riding a Specialized Tarmac and then a couple of Scott Foils. Both of those bikes were/are super solid, and I have zero complaints with either. The premium Foil, especially, was a killer ride when racing as it was super responsive. I found this Wilier to be a tad less responsive/stiff than the Foil, yet it is more comfortable on longer rides. I race road races and crits on the bike and it handles really well even when shoulder to shoulder leaning on other riders and praying your line holds. Smooth is how I would best characterize this bike. If you wanted one bike to ride and race on, plus have it look just plain awesome, your search is over. The copper color on this bike is so cool in the sunlight and stands out from the crowd of black bikes at your local group ride or race event. Is it expensive? Why yes, it is. Do I feel it was worth the price? Yes, considering the design aspect going hand in hand with the performance. Have been riding it for over a year at this point with zero complaints and a smile on my face the entire time!

My Favorite bike so far!

Out of all the demo bikes that I've had a chance to ride this is by far my favorite one.

I've had the chance to demo quite a few bikes from the Road Bike Buyers Guide (see here: https://bit.ly/2kE84Y7) and coming from a motorcycle road racing background I am very particular with how a bike handles. I'm not the guy that will pass you on the uphill or pull you in a breakaway but in a Sprint or a super fast downhill with a few dodgy turns tossed in I'm your guy.

Living here in Utah we have a few of those climbs and descents all over the place. When I take a bike out I leave my house and hit the 3 mile downhill with speeds reaching 50 mph. I sit on the toptube tuck in and let the wind rush on by. How can you tell if I bike handles well you ask, well at 50 mph imagine taking your hands off the bars and simply deciding you want to make a P&J sandwich. This bike is so smooth at speed and cornering you could literally do just that.

If a razor sharp bike is your future this bike should be on your list. 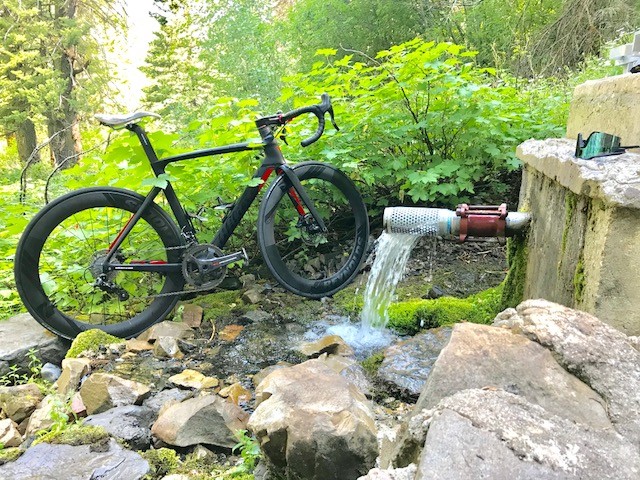