Transport your bikes in style with the Gateway Rack.

The Thule Gateway 3 Bike Rack mounts easily and securely to your car, keeps your bikes from swinging into each other, and folds up flat when you aren't using it so you don't have to worry about the rack sticking off the back of your car.

I set this up on my girlfriend's car, and I just can't get a secure fit. The straps slip no matter what you do. Pretty disappointed.

This Thule rack is great. Large enough to carry that third bike if needed. It has a sleek design, easy to put on/take off bikes, folds fairly compact for storage, light weight, simple to install on car, should be durable to withstand many years of use, and will universally fit the cars we need. Overall this rack is perfect!

On my 2011 Jetta with one bike. Also the Thule Rack and Box I bought from Backcountry store. 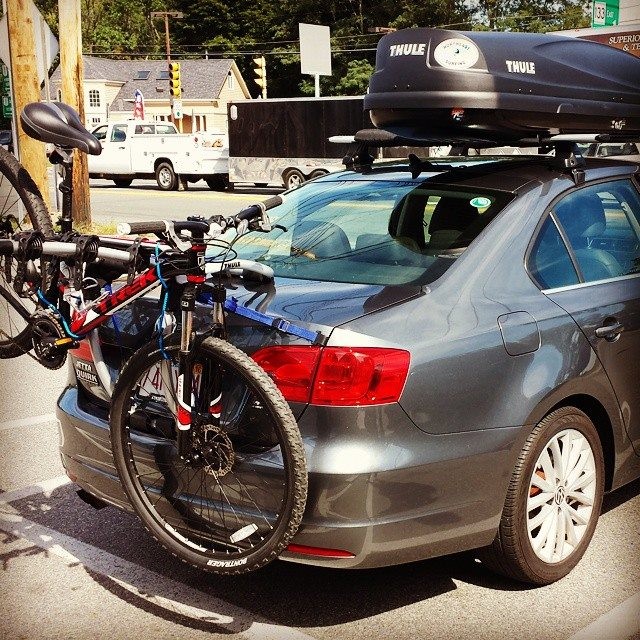 I really like it but wish I got the roof bike rack for my thule rack. I got this because I have 3 kids and myself. I will add the roof rack to. I had this rack on the back with no bikes and hit a bump it fell off hit the road. It was scratched a lot but no bending at least. I had it on there good to. With bikes on there it doesn't even move. I have it real tight and it does fold up while on the car but hard to do takes a few minutes. I don't bother doing it to much work just leave it out. I take off car when not using and place in trunk takes up very small space. Over all It is good solid rack. Just make sure you put on car tight.

This rack is great - solid construction and very versatile. The straps hold the bikes tight to avoid sway damage. This is used on an SUV easily and will be compatible with the sedan I plan on purchasing.

The backcountry product description is a bit deceiving, it includes locking cable and trunk strap information. It also states "locks included" under Tech Specs. Those locks aren't actually included with the product. I've contacted customer service and they state they aren't included and I can return it. Not sure what the situation is but the info page is not accurate - still a great rack though. I'd use caution when purchasing anything from the site and I probably won't in the future.

Does this bike rack fit onto a hatchback...

Does this bike rack fit onto a hatchback or SUV?

Yes, it technically can, however I would say it is not the best option. The reason being is that the way this rack would attach to the back of a hatchback or SUV would be nearly vertical and all the weight of the bikes would be placed on the upper straps. Since the surface is nearly vertical, combined with the weight of the bikes on the rack, the possibly of the rack coming off the glass/hatch is likely and would not make for a very stable platform. In short, I would only use this rack for short distances on a hatch or SUV with 1 or 2 lightweight bikes. To put 3 bikes on this rack in that scenario would be asking for an insurance claim in my opinion. The best option would be a hitch mounted rack or roof rack for those vehicles IMO.

Gotta say... I disagree with Kevin. The straps hold the rack onto the car (keeping it in static friction) but most of the weight is borne by the arms of the rack itself.

This is just the kind of rack I would look for for a car with an angled rear roofline. If the back of the car is perfectly vertical, then yes, I'd agree with Kevin, but if there's enough angle there to keep the rack from slipping, then the rack will bear most of the load.

I'm just speaking from my experience with a Saris Bones 3 on various vehicles. I was unclear saying all the weight of the bikes is put on the upper straps as depending on the bumper, the lower arms will typically take a lot of the weight. However depending on the angle of the back, it can just create a pivot point for the rack to move. When using the rack on a Subaru Imprezza hatch with 2 30 lb mountain bikes on the closest positions, even with the straps fully taught, the rack was moving off the hatch glass and just waiting for the bikes to rip off the car at highway speeds. This was even after retightening the straps several times. Only after we removed the wheels from the bikes to create less drag could I focus on the road instead of the bikes on the back of my car. Certainly not a situation I would recommend this type of bike rack for an avid biker going on trips further than their actual ride. After using a hitch rack with trays such as the Kuat NV or Thule T2, or even a decent roof rack like a Thule Sidearm, you will never, EVER want to deal with the hassle of these racks again. This is coming from my experience. If you are using this for recreational use here and there, you'd probably be fine.

Is it the best option? Not in my opinion.

Will it get by? Yes.