The past few years have been a tidal wave of generational change and innovation. It's safe to suggest that no company better embodies that than the imaginative product designers at SRAM, and no product better embodies that than SRAM's Red eTap HRD Shift and Brake Kit. Wireless electronic shifting? Check. Hydraulic disc brakes? Check. SRAM's typical zeal in approach R&D? Check. Obviously, the eTap HRD system won't be the final say in road gruppo technology, but we have a hard time imagining where the industry can go from here. Which is why we continue to trust SRAM's relentless pursuit of innovation.

We first saw the seeds of this innovation on brakes like the new Guide and reworked Code series, with the eTap HRD levers importing features like Contact Point Adjustment and a healthy body of anti-heat design elements from their mountain bike counterparts. With new features comes a new model name: gone is yesterday's HydroR; here to stay is HydroHC. Contact Point Adjustment dials the amount of grab you have to put on the levers before the pads dig in to the rotors. If you like a light touch, you can dial them light; if you tend to throttle the hoods during hard efforts, maybe allowing a little leeway for incidental lever pull would be a good move. Either way, you can adjust the levers to match your style—and each other—without manually fiddling with the calipers and pads.

The heat dissipation tech hinges primarily on four features: heat shield, insulated aluminum pistons, and a wider pad pocket. Of these, the stainless steel heat shields are the most notable, as they insulate the fluid from the pads, providing an extra layer of thanks-but-no-thanks that helps prevent fade during long periods of braking. All of these features were first implemented in the Guide, Level, and Code redesigns, so they've already proven their mettle in the emergency braking moments that often define off-road.

At the heart of it all, SRAM's proprietary Airea communication protocol creates a unique, 128-bit encryption code that securely pairs the shifters and derailleurs, resisting both hacking and jamming for worry-free shifting even in a pack of other eTap steeds. Unlike other electronic drivetrains, SRAM's system is closed and does not allow shift reprogramming, which is actually a refreshing dose of user-friendly simplicity in an industry that can occasionally get lost in minutiae. SRAM is confident that the eTap shift logic delivers an optimal shifting experience across road-related disciplines without requiring a host of minor tweaks—an ethos developed and proven by the company's mechanical road and mountain lines.

The brains of the system sit in the rear derailleur, which translates the Airea protocol to drive exacting shifts. Featuring the Exact Actuation technology found in mechanical Red derailleurs, the eTap rear derailleur manages the narrow spacing of an 11-speed cassette for reliable shifting accuracy with every click of the lever. It also allows for multi-gear shifts with an extended depression of the shift lever, so it's spry enough to help you respond to any sudden attacks. The front derailleur boasts SRAM's Yaw technology, another carry-over from the mechanical groups. Yaw rotates the cage ever so slightly as the chain runs across the cassette to maintain an optimal chain line and reduce chain rub for quiet, precise shifting and efficient operation across the entire range of gears.

The shift paddles sit under the brake levers in a similar position to the mechanical version, but they use eTap's peculiar shifting logic—the most pronounced departure from traditional shifting in decades. (We refer you again to the R&D zeal mentioned above.) The right lever directs the chain down the cassette for a harder gear, the left lever guides it up the cassette for an easier gear, and simultaneously engaging both levers shifts the front derailleur between the chainrings. We suspect this system was built with one-by in mind, but we're also able to adapt to it with a double crankset after just a few minutes of throwing levers. Each shifter also features ports for compatibility with SRAM's separately sold Blip shifters, offering virtually endless potential for shifting access from the drops or the flats.

The front and rear derailleurs each carry their own rechargeable battery pods, which click into place quickly and easily and are interchangeable between the two derailleurs. With their claimed 60-hour ride times, you shouldn't have to worry about losing power, but it's nice to know that if you do forget to charge up and you run out of rear derailleur juice out on the road, a two-second battery swap from front to rear will get you back up and running with full access to the cassette range. SRAM claims that 60-hour run time means a fully charged rear derailleur battery will last over 1000 kilometers or 620 miles, with the front derailleur lasting even longer because of its relative dearth of use compared to the rear.

Each shifter is powered by a CR2032 coin type battery with a predicted lifetime of two years when riding an average of 15 hours per week. To keep tabs on the various battery statuses, each derailleur and shifter features an LED indicator light to communicate battery life, with green, red, and flashing red stages to clearly relay power levels. Each component also incorporates an accelerometer that puts it into sleep mode when stationary to conserve battery, and wakes it up for full functionality when your bike is in motion.

SRAM tested eTap in a wide range of riding conditions, both in the real world and the lab to ensure reliability; as we mentioned above, we've actually seen evidence of this on the roads and 'cross courses around the country. Given the cold-weather tolerance issues of its first generation hydraulic road brakes, we're particularly pleased to note that SRAM specifies that eTap has undergone testing in its in-house climate chamber, proving the group's reliability in temperatures ranging from -20 degrees up to 120 degrees Fahrenheit.

If you've got the cabbage, get it

This is without a doubt a spendy piece of kit and thus not for everyone. Do mechanical/ rim brake groups shift and stop? Of course they do. The same way that a car with a keyed ignition and standard transmission starts with the turn of the key and changes gears after pumping a clutch pedal in and out and shoving a lever, but a modern keyless ignition where you get in and hit a button to automatically start the engine with automatic transmission to shift for you is pretty cool and soon feels like a necessity.
I connected this to my Garmin 520+, not only do you get gear position and/ or ratio displayed, but the Garmin also records how many shifts you make per ride, both front and back which you can review after the ride. An average training ride for me shows over 500 shifts out back and about 1/10th that up front. Considering the huge difference in effort and movement between shoving a cable back and forth in the housing against a strong spring with mechanical shift, vs the light effortless click with eTap, multiplied times 550 per ride, the difference over time is startling. Imagine being deep in the drops, wanting to shift and just reaching out with your finger and touching that switch. No shove, no grunt, no huge lever throw to physically have to shove a chain back and forth, no missed or half shifts. Just click, let the motor do it's work and instant flawless shift.
Now add the excellent hydraulic discs and very light weight and you have something worth spending some cabbage on. This is some next level stuff, don't be a jealous hater and knock it if you haven't tried it. You're probably driving a Celica and this is a Tesla. Ride a bike with this on it for a few miles and you'll be selling anything that's not bolted down to get it.

Dude, how can you trust that??if something goes wrong... no brakes.

except the brakes are hydraulic, not electronic . . . 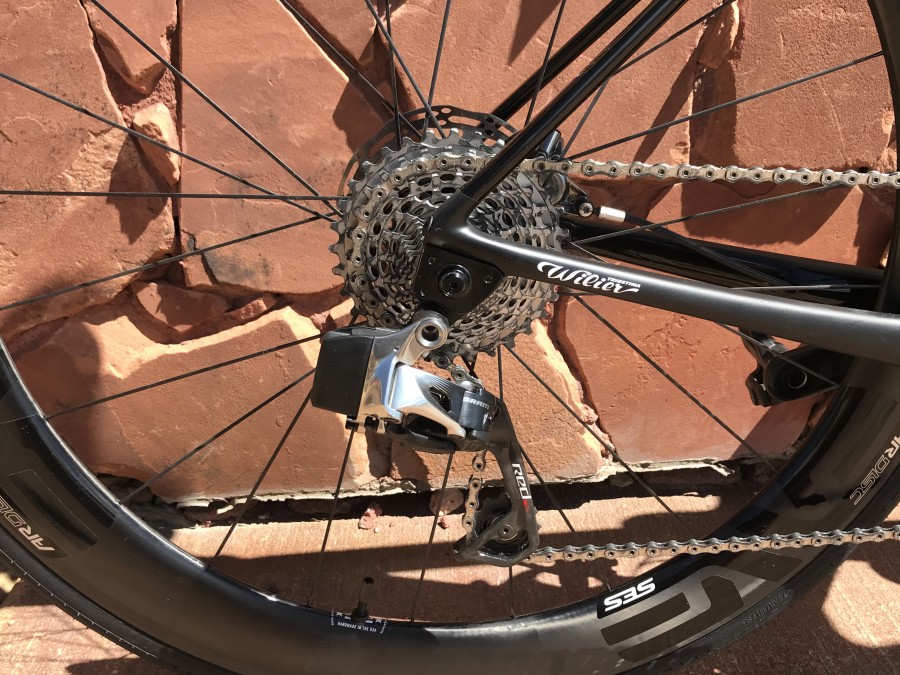 My wife just got etap HRD on a Wilier Cento 10 NDR and it is a GORGEOUS machine. With the wireless shifting, all of the cables are routed wirelessly, which makes for such a clean build. The HRD brakes provide excellent modulation and the stopping power you'd expect from a modern disc brake setup.

For those of you who have chosen to abstain from cycling-related media for the past couple of years, eTap is SRAM's bluetooth-connected answer to Shimano's long-standing Di2 electronic shifting system, and it is INCREDIBLE. The right shifter moves up the block, and the left moved down. Tapping them together controls the front derailleur. Now, as something of a traditionalist, I resisted this notion when I heard it for the first time, but after riding it, I can't get over how brilliant it is. It took me less than a quarter mile to become completely comfortable with the new shifting pattern. The buttons are nice and large, right around the size of a quarter, only square. Each push of the shifter comes with a nice, positive click, and the derailleurs react instantly. Performance benefits aside, you'll probably shift twice as much as you need to for no reason other than the fact that you feel like RoboCop. The braking is also excellent. The guts of SRAM's HRD calipers are the same as their guide brakes, which have taken the MTB world by storm. Endless power, perfect modulation, and impressive reliability all add up to a major win. eTap gets a 10/10 in my book.

Smooth as silk shifting. No complaints so far - only wish they had connectivity with Garmin edge. Battery life very good - curious on shifter battery life.

They connect to my Edge 820 without any issue. I can see my gear selection as numbers or a small graphic. What else could you want?