Feeling sick? Replenish yourself with this drink mix.

The Skratch Labs Wellness Hydration Drink Mix is simply a renamed version of their original Rescue Hydration Mix, targeted towards children and adults lacking hydration due to a particularly bad illness with vomiting or diarrhea. Also, it can be used after exerting yourself in particularly hot weather when you're feeling ill afterwards or having a rough hangover after a rowdy night of drinking, seeing you'd then experience the same symptoms as being sick.

It's formulated as an Oral Rehydration Solution, as recommended by the World Health Organization for those suffering bad illnesses with diarrhea. It contains much more sodium and less sugar than typical Skratch Labs hydration mixes used by outdoor athletes. You'll find it's made without excessive flavoring that tends to upset stomachs, artificial sweeteners and coloring agents that are potentially harmful, as well as gut-disrupting emulsifiers found in many commercial rehydration mixes.

Skratch Labs Wellness Hyrdation address a pretty specific need for nutrition -- situations where you're extremely depleted of salt and need an abrupt intervention. I regularly use many other skratch products (exercise hydration mix, anytime hydration mix) to proactively AVOID this, but I'm comforted knowing I have a more aggressive option available if I get behind for whatever reason. 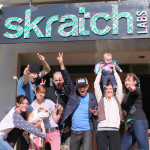 Thanks, Will! This one is stellar for when you are traveling and need an immune system boost, you are sick or... hungover ;)

Maybe it didn't literally save my life, but when I get dehydrated- which happens fairly often in the high desert- these things bring me back to life. For years I have joked about needing IV fluids after summer activities (mostly biking) but this is much easier than sticking myself with a needle. Seriously, if you run dehydrated no matter how much you try to drink, like me, give this a try.

Thanks! Glad the Wellness packets have helped. If you regularly get dehydrated during activities it is a good idea to drink some Skratch before and/or during depending on the activity to help avoid dehydration in the first place. Feel free to email info@skratchlabs.com or call 1.800.735.8904 to talk through details and find a solution.

This stuff just works, taste good, hydrates well, easy to mix, 1 pack is enough for a water bottle. not too sweet but just enough to make you coming back for more and more.

Glad it has been working well for you!

Great to hear! Thanks!