Along with the release of Shimano's workhorse 12-speed mountain group comes updated shifters as well, offering precise and responsive shifting for improved control on the trail. Featuring refined ergonomics and a lighter shifting action, the new XT SL-M8100 Trigger Shifters provide a claimed 20% quicker lever access and require 35% less shifting force than the previous generation. They also get a rubberized thumb paddle for improved grip on the downshift, with the paddle offering just a bit more surface area than XTR. The key change, however, is the introduction of an I-SPEC EV version of the shifter, which lets riders customize the ergonomics by allowing 14mm of lateral adjustment and 20-degrees of rotational adjustment, making it easy to find the most comfortable position for your hands. That being said, you'll want to stick with the standard handlebar clamp version if you aren't running Shimano brakes.

Perhaps our favorite feature of the XT shifters is Shimano's proven multi-shift function that lets you shift up two gears at once if you need to accelerate quickly on a downhill section of trail. The second click is just a bit firmer than the first one, which prevents any accidental overshifts. We also appreciate the two-way release that let's you choose between pushing or pulling the trigger to initiate an upshift, with the pull function being especially useful in sprint situations.

If you're running a double chainring up front, the left shifter features a Rapid-Fire Mono shift lever that lets you shift both up and down with a single thumb lever. You push it once to shift from the small ring to the big ring. To go the other direction, you give it a little push forward until it clicks, or you can pull to release it and the chain moves back down to the small ring.

Similar to some of the other reviews, I received the incorrect shifter as well. Rear 12 speed was order and received a front 2x shifter. Maybe the same one keeps getting passed around! I will add an accurate review once I get the correct part.

I order the 12 speed XT SL-M8100 shifter but received an XT M8100 I-spec EV. The picture and description seem correct on the web site. Maybe someone pulled the wrong part?

Got the Wrong Part

Like the previous review, I ordered the 12-speed XT shifter and received the front derailleur shifter instead. Paid for 1-day shipping to get this item installed before a biking trip in 4 days. Now I’m screwed! I’ll contact them tomorrow and see what can be done.

(Backcountry) Sent me a 2x shifter instead of the 12x. They wanted me to either buy another one or wait until the wrong one was received by them until they would fix THEIR mistake. I recommended ordering somewhere else.

dead shifting into easier gears. broken internal spring as mentioned in another review. only six months of riding.

The shifter itself works great and the setup looks super clean with the I-Spec EV sharing a clamp with the brake lever but the range of adjustability is not very good. I prefer to have my brake levers pretty far inboard for easy one finger breaking and I have them angled downward for more XC style riding. With this brake orientation there is not enough range of motion in the I-spec adjustment to get the shifter in a good spot. I can barely reach the upshift with my index finger and I have to stretch my thumb pretty far backwards to reach the downshift which causes me to hold my bars funny and is resulting in a lot of thumb pain. I wish there was an option to adjust or swap the levers which would allow this to be a perfect setup but I'm probably going to have to by the bar clamp version to improve ergonomics and eliminate the severe thumb pain form having a less than ideal setup.

Does it include cable and housing?

Do not buy, design flaw!!

I'll start by saying I ride A LOT, on average 16hr a week, with big weeks of 22-24hr. Love endurance MTB! I tend to find flaws in components that others don't have issues with. I am also a very competent mechanic(goes with the territory, riding so much), who's been wrenching on bikes since I was 12 years old. I know my stuff when it comes to bikes. I have had 3 of these shifters fail on me, all in the same way. the first lasted 3 months, the second 4 months, and the third 6 weeks. The culprit seems to be the spring that drives the downshift/easier gear pawl fails, and it no longer stays engaged with the shift ratchet ring. Shimano has warrantied all three, no questions asked. (on a side note, I have had 2 of the new quiet freehub mechanisms fail, as well as the main pivot of an slx rear derailleur, those reviews are posted on those product pages).This failure rate has been shocking to me, I had the same 11spd xt parts(everything, hubs, shifters, cranks, you name it) on my bike previously for 3 years without a single issue. 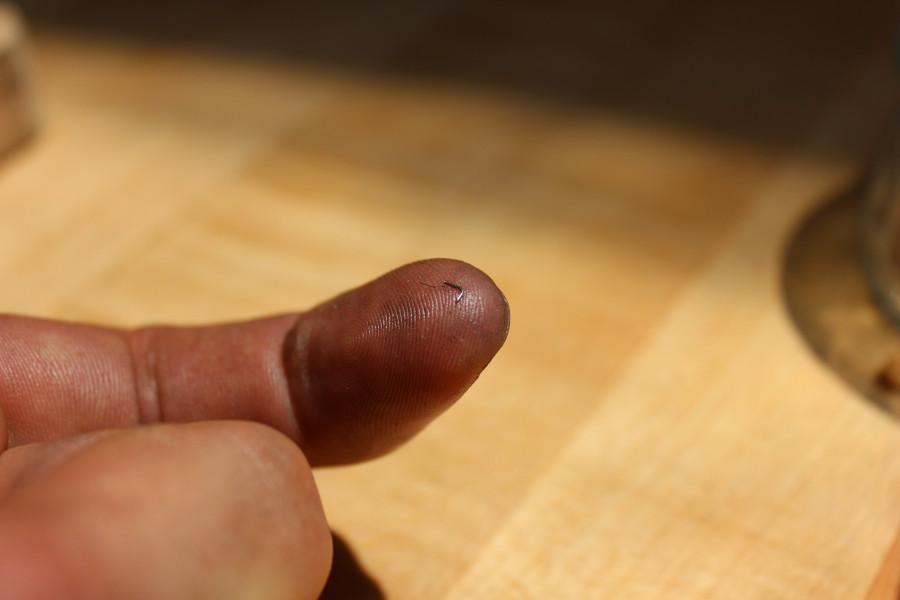 I've had precisely the same issue with, now, FOUR XTR sl-m9100 shift levers. I posted my experience on MTBR.com: https://forums.mtbr.com/drivetrain-shifters-derailleurs-cranks/shimano-xtr-m9100-shifters-keep-breaking-no-downshift-intermittently-1150763.html . This thread now has a total of 8 reported XTR 12-speed shift lever failures (blank downshift lever pushes). So your three makes a total of 11 failed levers. I've notified Shimano USA of the problem and I believe they are now monitoring the thread I started. Please, if you will, go to the thread and post your own experience. I'm fairly certain that the internals on the XT and XTR shifters are identical, or close to identical.

After 4 months and a few hundred miles my XT 12-speed shifter abruptly failed. Shifter effortlessly and repeatedly bottomed out trying shift into lower gears. I attempted shifting to lower gears on the rest of my ride and it actually successfully shifted down several times although it mostly failed again and again. My local bike shop said they put in a warranty claim and were told that the replacement shifter would be available around end of June. The shop actually comped me an SLX shifter replacement so I could keep riding - very cool. Thinking of just keeping the SLX shifter since the XT and XTR shiters seem unreliable, at least for me and a some others. Anyone had any response from Shimano about what they plan to do about this issue?

Same issue - Bought a Trek Fuel XT this fall and after maybe 150 miles my XT 8100 shifter failed. Same issue as others have posted "Shifter effortlessly and repeatedly bottomed out trying shift into lower gears. I attempted shifting to lower gears on the rest of my ride and it actually successfully shifted down several times although it mostly failed again and again."

Great ergonomic design. Love the action of the triggers. The upshift is nice and snappy and gives you the option to trigger-shift from behind if you need on a long climb. The downshift is smooth and the lever feels great. Small grippy bits on the thumb catches of the triggers really hold your thumb in place if you need to shift in rocky and rough terrain. Overall I am really liking this shifter. I think Shimano really engineered something smart and it performs well. Another note on the I-SPEC EV adapter to mount this shifter to your brake lever. You get a little more more adjustablilty compared to SRAMs MMX brake/shifter set up. You get a nice swing fore and aft and then side to side as well.

I had about given up on Shimano but with the release of their 12-speed SLX and XT groupsets, they once again got my attention. Over the last few years my bikes have always had Shimano XT drivetrains, I've gone from a 1x10 to 1x11 and now 1x12. They nailed it with the 1x12. Yes, it took them quite a few years longer than SRAM but the wait was worth it. I am running the 51T cassette with a 32T chainring out here in Utah and that gives me all the range that I need. Right away I was climbing more efficiently and quicker than on my old 1x11 setup. So you might be asking, Why go with Shimano over the competition? Well, Shimano's Hyperglide+ design is the main thing that sets them apart. With this design you can now shift whenever you want. No need to unweigh the pedals slightly during a shift to prevent the chain and cassette from making terrible noises. The chain will move up or down the cassette without any fuss. It still seems strange to not ease up on the pedals before shifting but you can and the drivetrain is happy to get you into the gear you want. So there's that, and with Shimano you still have the ability to drop down two gears with one push. I love that feature and use it often. I'd say if you do not care about having the absolute lightest drivetrain setup then you will be very happy with Shimano XT for the money. Shimano XT has always been a great bang for the buck groupset and that remains true with the 8100 series. Pros: Shimano Shifters (Rapidfire Plus and I like shifting with my index finger), buttery smooth shifting up and down, quiet, easy to setup, the performance you get for the price.. There's even a mark on the inside of the pulley wheel cage to simplify setting the correct B-tension. Cons: A little heavier than SRAM GX. A con that I will happily live with for getting a better shifting drivetrain for less money. You need a MicroSpline freehub for the cassette. It was an easy swap for me with an I9 freehub. In the future MicroSpline will be much more common on new wheelsets so this will be less of a problem.

I was able to throw the XT 12 speed drive train on my MegaTower a couple weeks ago now and man does it know how to hold its own! What I noticed right off the bat is the set up was very simple! It only took about an hour to get it up and running. There are some amazing little details to the 12 speed components as well! My favorite being the rubber pad on the shifter for more traction (most companies leave it as polished alloy, which can be very slippery). After getting the first few miles under my belt I noticed how dead silent the shifting actually is! I would have to look down to make sure I did in fact shift, and it was always spot on. The other aspect that really has me excited about this stuff is that you can confidently shift under load. I have run Eagle drive trains on previous bikes since Shimano had not released a 12 speed group set yet, but I'm stoked they took their time, because they nailed it right off the bat! Pros: - Easy setup - Dead silent shifting - Ability to shift under load -Attention to detail (the little things that just make it easy to use) Cons: - It isn't the lightest 12 speed setup out there - Visual Design wasn't a big focus (is not a piece of art like xx1 Eagle)