If your current road shoes have made it through 3 presidential terms, you deserve to treat yourself to some new carbon soled wonders with dial closures and that's just what you'll get with the SH-RC7 Cycling Shoe from Shimano. As a slight running upgrade to the outgoing RC7, this model now receives a second BOA L6 dial for quick, micro tension adjustments of the Powerzone wire guide. These shoes are plenty light, stiff, and comfortable for racing and are a little friendlier on the pocketbook than its range-topping big brother, the SH-RC9, and at a size 42, it’s a whopping 2 grams heavier per shoe. Its stiff Dynalast carbon sole and high-density synthetic leather upper with perforated venting for superior fit allow these shoes to strike a balance between race-day performance and training comfort utility all at a price that saves money for race day entry fees.

So comfy, so stiff!

Familiarity:
I've used it once or twice and have initial impressions
Fit:
True to size
Size Bought
45
Weight
173 lbs

These are my first "race worthy" road shoes. I've been a mountain biker for decades, but over the past couple of years gotten in to road riding. Up until now I was wearing a set of second hand Louis Garneau shoes with an injection molded carbon sole. Putting these on for the first time opened my eyes a bit to what I have been missing. The shoes hug my feet uniformly without feeling too tight unless I really cinch down the boa dials. The heel feels locked in place while still feeling padded, and there is no flex in the sole. Admittedly, I could have gone down a half size. I have narrow feet and in order to get my forefoot snug in the shoe, the top of the tow box does get a slight wrinkle. We're out of 44.5s anyway, so I can live with my 45 shoes. The feeling on the pedals is great! They're so light and the stiffness just makes you feel so much more connected to the pedals. I've only done 40ish miles on them, but they seem like they could handle long all day rides perfectly fine. One thing the pictures don't show you is on the white shoes; they have a kind of swirly texture that reflects light in a sort of mother or pearl sort of way. It's really hard to capture on camera but I really like it. It feels way fancier than something I would normally go for! It's subtle though, you only notice it when you're up close and holding still. That being said, I have noticed that the texture does mean it's a little more effort to keep them clean. That's what you get when you pick white shoes though. 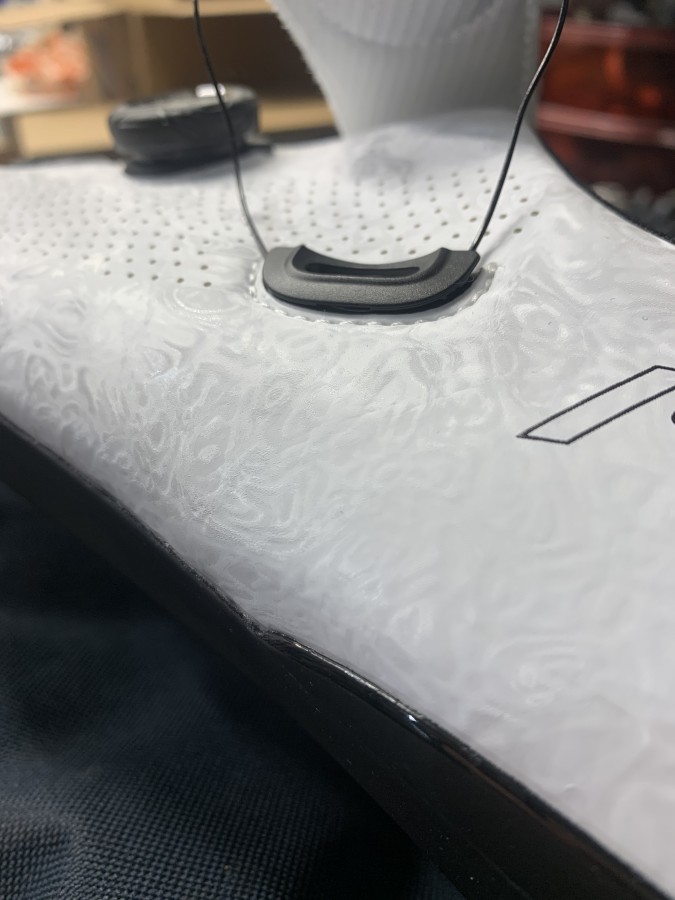 Wanted to love it; feet didn't fit it

I tried these along with countless other brands in the search for a pair of shoes that fit my very thin feet. I wanted to love these, they review well and they seemed to be well-constructed, however they were far too wide for me in the sizes that fit the length of my foot. If someone with crazy-thin feet is in the same spot I was, try out Sidi shoes! Anyone else, give these a try!

Only owned Shimano road and tri shoes. Haven’t been disappointed with fit or performance. I’ve used these for several rides so far and am enjoying them. First time using the BOA system, but so far so good. Like another reviewer said… the shoe is “stiff enough for my aging feet” LOL!!! I can so relate! Definitely recommend these shoes.

Is this product a regular width?

Just got these a day or so ago; Seems like a great quality shoe for the price -- nice stiff sole, pretty light, and well constructed. Unfortunately pretty narrow profile -- similar to Sidi-- so normal 42.5 (~8.5 US) was a little small. Maybe I'll give another go with 43cm (?). Otherwise I would give it a "5".

I've owned several pairs of Shimano shoes, both road and mountain and I've never been disappointed with any of them. The fit and build quality are always above par. So the choice of getting the RC-7's was easy. And after several rides with them, I'm still a fan of Shimano's shoes. They are nice and light, stiff enough for my aging feet, and they seem to ventilate quite well. They fit my feet great and the boa system allows me to dial in the ideal fit. I highly recommend these shoes!

I had last years version which I liked. This years version is perfect. I love the 2 BOAs instead of one. I'm not sure what they did different but it is even more comfortable. Great stiffness and great comfort.