The Saint M820 Disc Brakes may be the unsung heroes of Shimano's pro-proven DH groupset, having enjoyed success on the world stage with Gwin since the prototype stage. In fact, Shimano's initial unveiling of the group was delayed slightly so the Japanese company could continue refining it according to the feedback from elite racers like Gwin, and the result is a shorter Servo Wave arm that modulates better than its punchier predecessor, feeling more like XTR and allowing for more finesse while tempering speed to ensure you carry precisely as much momentum into techy corners and rock gardens as you want.

For some, the Saint brake's key difference with the less expensive Zee — tool-free lever adjustment — is an unnecessary luxury; however, for everyone from pros like Gwin to aggressive freeriders the world over, the ability to quickly dial stopping power is priceless. The brakes are finished with one-way bleeding for ease of servicing and ship with a reinforced brake hose that resists deforming to keep the brake feeling consistent throughout the run. The included brake levers are I-Spec B compatible. 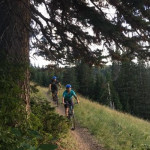