The mountain bike world caught a glimpse of the V10 29er's not-so-humble beginnings at the 2017 World Cup Downhill season opener in Lourdes, when the Santa Cruz Syndicate team put together an impressive trio of qualifying runs on the prototype bike. With Vergier qualifying 1st, Shaw in 3rd, and Minnaar in 6th, all eyes were on this big-wheeled controversy machine. Five weeks later at Ft. William, Minnaar piloted the bike straight to the top step of the podium, his seventh victory on the infamously fast and rugged track. At that point, the arms race was on. The V10 with 29-inch wheels had proven itself at the most elite level of downhill racing, and other manufacturers started scrambling to develop their own big-wheeled race machines for their World Cup riders. In the meantime, Santa Cruz spent the next two race seasons working with the Syndicate Team to meticulously perfect the V10, ensuring that it not only met the needs of their racers, but also that it was ready for full-scale production. Now, the V10 Carbon 29 X01 Mountain Bike is finally available, a speedy machine for the up-and-coming racers and hardcore gravity fanatics among us, making it apparent that the most successful bike in downhill history shows no signs of slowing down.

While the V10 Carbon 29 is a completely new bike from the ground up, it continues the Santa Cruz tradition of bombproof carbon frames with superior stiffness and ride quality. In addition to faster-rolling 29in wheels, the new bike features a longer reach and fully modern downhill geometry, along with two different geometry adjustment points. A flip-chip in the lower shock link changes between High and Low geometry positions, offering up either a 63.7 or 63.3-degree head angle, and a 14in or 13.8in bottom bracket height, respectively. Another flip chip in the rear axle alters the chainstay length by 10mm, giving you the option to lengthen the chainstays and wheelbase for added high-speed stability, or to optimize front/rear balance for your height and riding style. Together, these geometry flip-chips let you tune the bike to suit different courses, be they steep and tight or wide-open and super-fast.

In addition to the geometry changes, Santa Cruz was able to lower the suspension leverage rate in order to improve rear shock performance, thanks to the two seasons of extensive testing with the Syndicate racers. They also improved the frame's internal cable routing, incorporating their proven internal molded tubes that keep things clean-looking and easy to work on, and adding internal derailleur cable routing on the swingarm to protect the housing from chain damage. Protective bits are improved as well. A new ribbed chainstay protector drastically reduces chain slap noise. There's a fender for the rear shock to protect it from debris spun up by the rear tire, as well as a bottom bracket and lower down tube guard to protect the area from rocks and other impacts. Our favorite piece is the protective bumper on the upper down tube, which shields your frame from any damage caused by the tailgate when shuttling.

Santa Cruz builds the bike with a truly downhill-worthy kit, starting with SRAM's proven XO1 DH 7-speed drivetrain and heavy-hitting Code RSC brakes to handle acceleration and stopping duties. Fox's top-of-the-line suspension delivers superb traction in heinously steep and gnarly terrain, featuring the bump-demolishing DHX2 Factory coil shock out back, and the trustworthy Fox 49 Factory up front with its invincible 40mm stanchions. The wheelset consists of reliable DT Swiss 350 hubs laced to burly Race Face ARC HD rims, with grippy Maxxis Assegai downhill tires rounding out the setup. And to ensure this rig is race-ready out of the box, Santa Cruz includes an e13 chainguide to keep you firmly locked into gear in choppy terrain.

Seriously it's that good

I haven't had a chance to make it to the Park yet, but I was able to Hike-A-Bike this bad mama jama up a couple thousand feet to crush some steep trails. I custom built my V10 up with Ohlins Suspension and I can't believe how incredible smooth and supple this bike rides and feels. It encourages you to simply let off the brakes and to simply go with it. If you need..... wait slash that who cares if you need it, GET ONE and have some fun.!!! 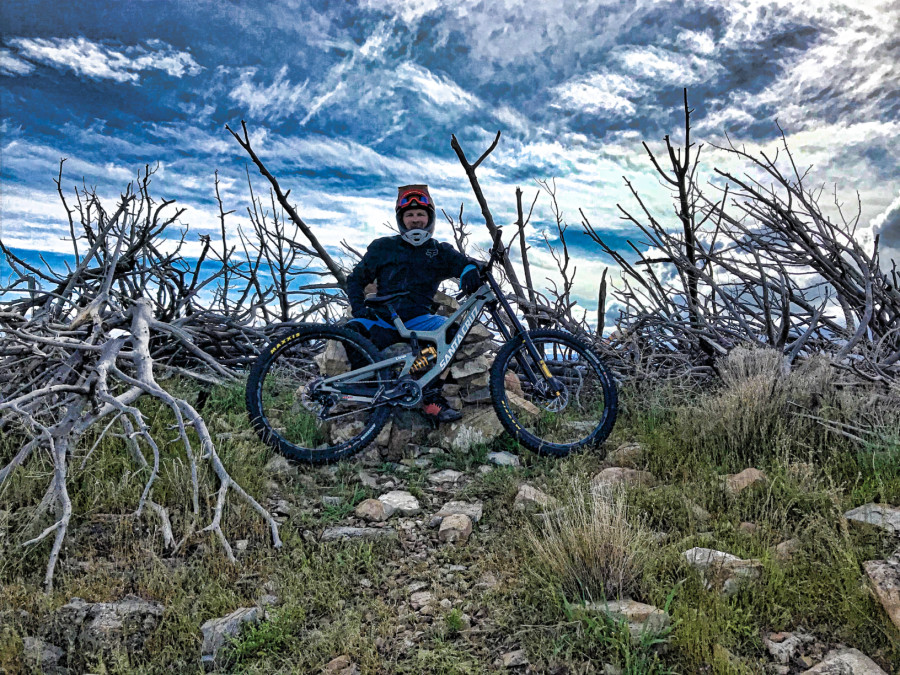