Inspired by a series of victories, the engineers at Rotor Bike Components didn't hold back when they aimed to craft the brand's lightest crankset to date. Instead, they packed in a featherweight carbon layup with the coveted direct-mount modular technology to craft a crankset that not only scales in at a minuscule 429g (175mm, including spindle), but does so with stiff precision and power, enabling you to spin further towards your own personal win, whether that's a podium, KOM, or new PR. The Kapic Carbon Crank Arms are built to withstand the most demanding riding conditions, which is no surprise given that they are named after the Cape Epic which sends riders across the rugged wilderness of Africa's singletrack.

Will these work on a Gravel bike with a 1x setup? The frame is the Open UPPER. 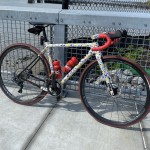