can you show or send me an image of the actual RD? it says it is silver but this only came in a weird bronze color and black.

spychicawrote a question about SRAM Force Rear Derailleur on August 24, 2020

what is the biggest cassette i can use on this with a 46-38 crank set?

what is this rims internal and external width

what is the widest tire size the frame will fit?
is 650b an option?

is it windproof? my helmet has openings at the top and I cannot find a cap to keep the breeze out

what does it weigh?

spychicawrote a review of Salsa Cowchipper Drop Handlebar on May 30, 2019 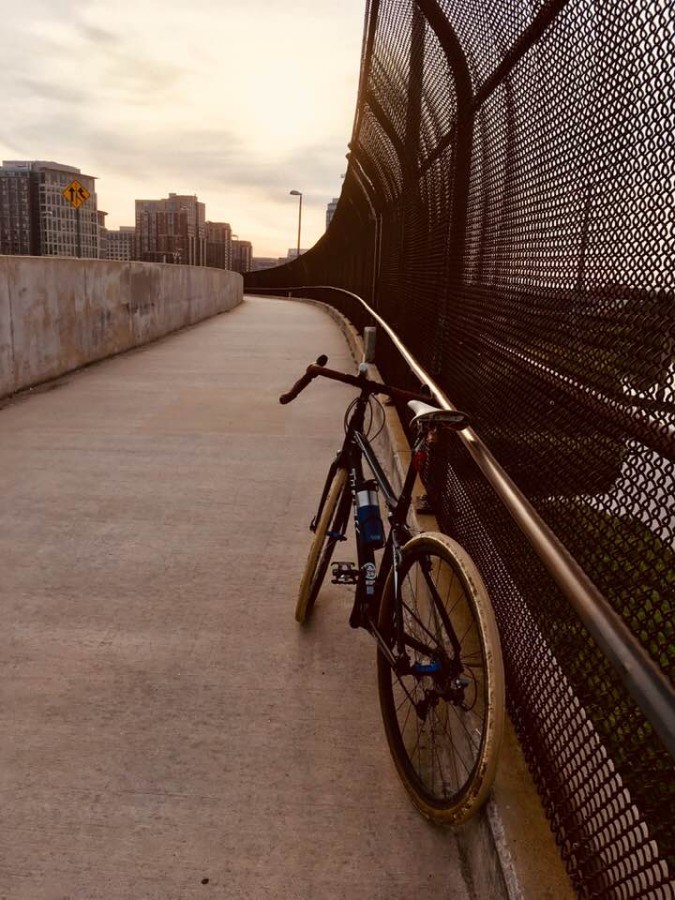 best of the bells

i have the cowbell on my steel CX bike. i have this on my converted carbon hybrid which was a flat bar triple but i morphed it into a compact double drop bar gravel bike. i mostly joy ride and commute on both. i also have the woodchipper on a plus mtb drop bar bike. all three are really great but have come to fall madly in love with the 24 degree flair that allows climbing, sprinting, cruising in the drops but in total comfort. the cowbell is a great roadie bar, and i find i'm most comfy in the hoods with it. but when you hit some single track, it's not wide enough and the front end can wiggle out from under you. this helps keep you moving at speed in corners and is easy to move between hoods, to tops to drops. i believe the drops themselves, b/c of the flair, have a front and rear position. i like the rear for cruising at speed and at the start of hills but then easily grab the curves in transition when the hill gets tough. i used to climb in the hoods, but this bar made me a better climber. swear.

contacted OS after attempting to use this kit to convert Surly HD fat rims mated to 45N VHelgas using fatty stripper and the tape kept coming unstuck from sides. complete waste of $60 and am assuming b/c i am a woman, he figured i did it wrong so why reimburse? i will say if it were to seal, it seamed less mucky than stans which gets gooey rather fast. and the valves were nice. but the kit without sticky tape is useless really. money back plz???

spychicawrote a question about Vittoria Bomboloni TNT Tire - 29 Plus on May 31, 2018 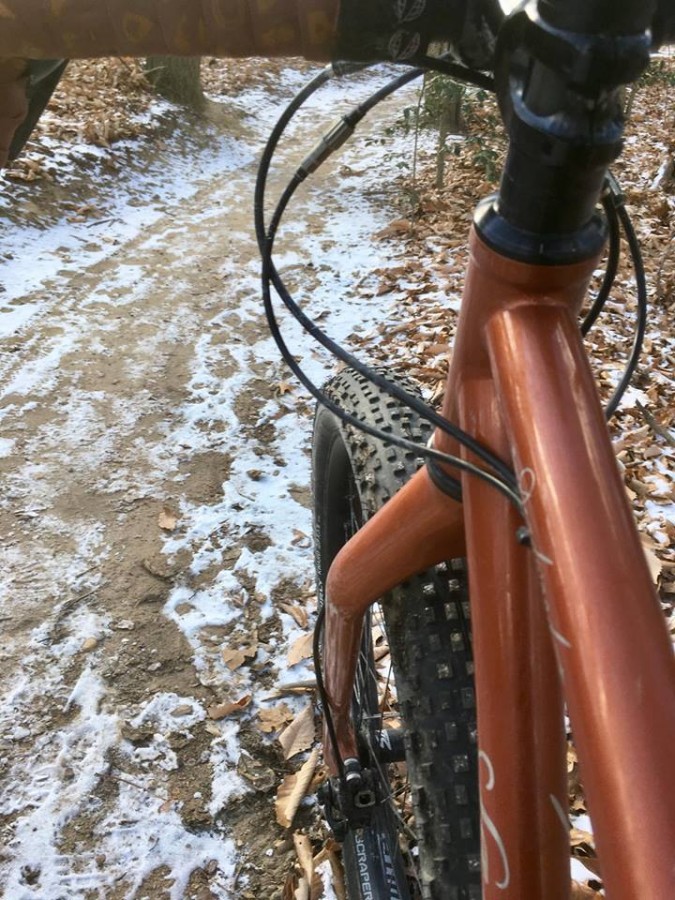 what would you recommend for a commuter 29+ which has cement after a mile in woods? so roots, mud, hardpack all in the same trail, then the cement jungle the rest of the way. using Knards now which no longer hold sealant. massive sealant weap, but otherwise performance is fine for my multi surface use. and i have a fat bike so not needing snow performance, but wouldn't hate if it went well in sand and snow as mentioned above.

spychicawrote a question about Maloja MartinaM. Short - Women's on May 28, 2018

where do the shorts fall to? below or above knee? 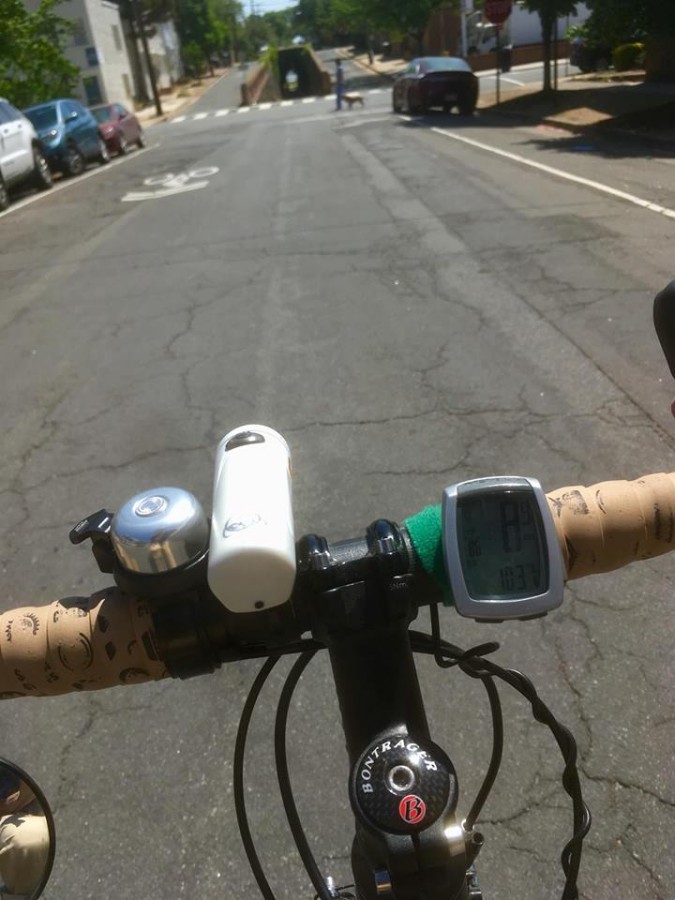 at the sale price, this light was a great addition to my commuting bits and necessary the times I worked past dark or left in the dark when the days were especially short. it's the absolute brightest light i ever had in either headlamp, flashlight, and even work lamps. and the side lights probably will catch some drivers attention, and they look cool. however there is no flashing mode, which most definitely needed when commuting in traffic. the only way some drivers were able to see me was the existence of heavy duty flashing, which my former Cygolight 350 did extremely well with 2 flashing modes (fast/slow). at the brightest, every driver knew to look out for something. this light has just a dimmer setting where the light literally dims-brightens-dims but it's barely distinguishable while moving at speed.

the other peeve of this lamp is the strap. i have 4 bikes in the commuter rotation and the thing is impossible for my 54 yo fingers to remove and reattach. i am bewildered that no other reviewers noted this. AND - if using a Salsa bar (thicker) with Salsa cork bar wrap, you will be affixing to the very last notch, meaning you have literally no strap left to grab onto when trying to remove it. you have to pinch at it, and it was so stiff, i though of using a wrench...seriously. if not for the fact my Cygolight had stopped holding a charge (after just a year), that alone would be cause for return as i am often deciding in a matter of seconds which bike to take and don't have 5 minutes to mess with removing and installing a light before heading out.
the only thing that saves this fact is the light swivels 360 degrees on the strap and you can get a better angle to grab. BUT it also swivels while you're riding so the light basically goes left and right of where you need it constantly. this is such a ridiculous discovery and there is no way to keep it pointing where you want as every bump causes it to move. the only relief is one side i have my bell mounted and so it only can swivel so far. this is a major fail for me in dark commute.
I did not try the helmet attachmentbut thanks L&M, nice add, but I'd rather you saved money on that and the bulletproof packaging and directions sans words.
the only other critique is weight. YES it is it the brightest, but it weighs in with enough heft to feel like an infant dumbbell. like heavy. not kidding. like, if installed near a bar end it could artificially steer the bars to that side.
lastly, the charger cover would not stay put and eventually flung off when the thing moved causing the flapping cover to catch under my bell then be torn off when i tried rotating the lamp to point back onto the road.
as for charging, it will charge fast, meaning 10-30 minutes, but i found that green light fast charge means 10-15 minutes use time. it needs several hours solid charging after battery discharge and if you keep it plugged in at both the destination and home, it won't fail. i found that use of other micro USB chargers did not adequately charge as well as the OEM.
with so many caveats, i honestly can't recommend it, even if it had a flashing feature, i don't know if i could overlook the major fails. i'll report back should my opinion change, but as of now, i'm saving for another cygolite and this will be the woods and night riding lamp.

spychicawrote a question about Industry Nine Trail S 29in Boost Wheelset on September 27, 2017

what are the specs on this wheelset: hub width, spoke count, material, rim inside/outside mm? thx!

spychicawrote a question about Scott Denim Short - Women's on July 6, 2017

Anyone got input on the sizing? For instance, I wear a Large in the Performance Bike house brand bike shorts and it fits like a 10. How does the LG fit in these, more like an 8, 10 or 12? Thx!

not able to mount

who knows whether these will be awesome if i can't mount them. they look nice, feel sticky, but the sidewall is extremely pliable and fluid. these were picked up for use to convert my salsa mukluk (which i built up in the basement) from fat to 27.5+ nimbleness. i love my fat bike, but want to see how it handles a smaller profile. but unfortunately these tires will not mount on my Easton Arc i40 rim. and while attempting, using everything you can imagine, the side wall is rippling, as if super stressed by the effort. it seems too small for this rim. sorry. but i have never seen a tire ripple this way during an install. even if i could somehow get them on, or pay the LBS to do it, they only measure out to 2.5" and that's without any air. this is not the footprint i hoped for, and won't enhance the bike geometry to go that narrow. lastly, this is not what the width they are advertised as. i am going to continue my search and return these for a REAL plus tire.

What's the widest mm tires that the rear can accommodate before rub?
Looking to get a 40mm Gravel King or 43mm Rock n Road on the back of some carbon cx for commutes that mix on/off road.