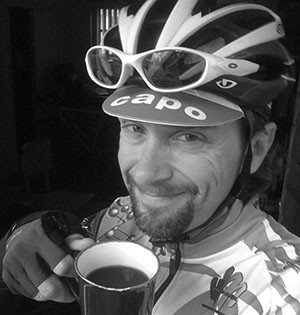 usually plying my trade on A1A

Riding for me is as much about style as performance. I look for equipment that is produced in the States as much as I can and I look for things that work over those that simply weigh less. For me, riding with style and courage are always more important than finishing first... well, almost always.

professorVelowrote a review of POC Ventral Spin Helmet on April 18, 2018

I have worn Giro helmets for years and I am also the kind of person who generally sticks with what works - which is to say, I seldom change for its own sake. WhenI started looking at new helmets, I knew I wanted updated safety and aerodynamics. I had looked at Giro's offerings. The Synthe had mixed reviews on how MIPS was incorporated and I wasn't sold on the looks of the Vanquish and its integrated shield. I was always interested in POC's safety-first approach to gear and I had a love-hate with their eccentric, vaguely retro style (think Hesjedal's aviators).When the Ventral started appearing in reviews I immediately liked that it wasn't as mushroom-y as their initial range of helmets. I also liked that they had incorporated their latest MIPS iteration. I have no idea if this makes any difference and the plan is not to find out, but more is better in this case.
A couple things of note about this helmet: First, I stuck with Giro because they just fit so well. POC's fit is different to be sure. It comes down further in front, but it doesn't interfere with vision or sunglasses. It did fit me a bit more loosely than my Giro, but again, not to its detriment. Based on the other reviews, I may be in the minority in terms of fit. The next is that the straps are a little different to work with and POC is a little light on instructions. It's sort of a stare at it until the logic becomes clear situation, but you'll get it. The venting seems quite good but I do well in the heat, so I may not be the best guide. Surprisingly, their sunglasses garage idea is waay more fiddly than you would expect - even with their own sunglasses. You have to push them in and down a bit. Beyond that, though, I am really pleased with this helmet. It looks very good. Its aero and safety capabilities I will just take on faith. I have finally found an alternative to Giro.

outstanding jersey, with a couple of *

The first thing you will discover about these jerseys is that they fit race tight. I bought the medium and it fits perfectly with the previous caveat. I don't mind the fit as it is what I was looking for - something snug that wouldn't catch any wind - but if you are in the market for something a little more relaxed, this ain't it. The construction and quality seem quite good and I like the tongue-wagging skull graphic. I could probably do without the "attaquer" on each sleeve, particularly on days that I don't feel like attaquing, but it isn't a big deal. The other thing about the jersey that should be mentioned is that it feels a little warm. Perhaps a bit too warm for mid-summer riding - which is a little ironic in that it comes from Australia and is presumably a summer jersey. This may also be part of the SPF of the fabric, but just something to note. I live in Florida and it is a bigger deal than perhaps a northern summer would make it.

I bought the black, but intend to buy at least one of the other colors and may follow-up with a color review. Oh, and I get that my previous comment about the heat and then a mention of the black color will leave some scratching their heads, but I have other black jerseys that just don't feel as warm... which is also about breathability which this seems to have less of. Finally, the fabric has a noticeable sheen to it which may or may not put you off. I don't mind it, but it doesn't quite match the look of other bits of black kit.

*Truth be told, all contact points are a matter of a bit of objective information and a lot of personal preference. I had ordered a pair of the Bont Vapor Plus shoes, but they felt sloppy. I appreciated the extra toe box room, but the extra width seemed to extend all the way back to the heel. Back went the Bonts and in came the Lakes.

These are breathtakingly expensive, but for my feet these were the right choice. The difference with the Bonts was night and day. The Lakes feel like someone is holding your foot tightly in their hand - not uncomfortable, but surprisingly firm. They - like the Bonts - are heat-moldable, but I have not needed to do so. If you aren't as happy about their firm feel, you could easily remold the shoe to a wider fit. Personally, I'd rather go that way than try and mold a loose shoe to fit tighter. The Boa closures work great too. The top strap comes a little lower on the foot than other shoes. I have had the Rapha Grand Tours and their Giro counterparts the Prolight SLXs and both of their top straps came too high on my foot so that when my feet were at 9 o'clock the strap would cause discomfort. The Lake shoe is lower (although not quite as much as the Bont which was exceptional in this regard) and still holds firm under standing climbs or hard efforts. I do not have an objectively narrow foot, but if your feet run toward the narrow side, these are a great choice. You may also get the same fit with their less expensive shoes. I went for these because I wanted a super comfortable top-shelf shoe that was also understated (bought the all black) and these have been perfect. They are also Speedplay specific which has been great.

Oh, and buy these from Competitive Cyclist. If they aren't for you the return policy is outstanding.