Seb Gwrote a question about Black Inc Carbon Integrated Handlebar/Stem on May 13, 2018

Perfect cassette for the money. Running 11-28 with SRAM Etap and DuraAce Chain. Crisp, precise shifting and seems to run a tad quieter than its 6800 counterpart.

Very well made and actually more substantial in weight and material than the image would suggest. Comes with a nice Aluminum Retaining Ring to prevent slippage and increase rigidity.

I have it mounted on my Feedback stand. Used two layers of masking tape and it fits like OJ’s leather gloves...snug!!!

Form fitting, flexible and extremely comfortable. It is surprising how warm this material keeps the body given that it is so thin.

I used it while hiking in the mountains of Colorado and felt very comfortable wearing it. I'm sure it will serve me well on the bike come winter.

Had to upsize to XL and it fits my semi-athletic body quite well. It is very soft to the touch, reminiscent of fine Merino Wool.

I ordered both the Lungo and Silverline and in all honestly I feel that these are anatomically superior (for my body type).

The thigh paneling material wraps around with a comfortable level of compression while providing exceptional mobility.

The straps are nice and wide and don't bunch up. The leg length is on the longer side, but very comfortable with the cuff staying put where it should.

The chamois is superb, very, very comfortable. First ride 80 miles, I truly forgot I was wearing them. I have a plethora of high end bibs, much more expensive than these, but none are nearly as comfortable. Truly impressive comfort!

Get one, get two or even three, you won't regret it.

Beautiful, light & breathable jersey with a race fit, which means that nothing flaps around. As with any European cut I had to size up to an XL. I got the White/Fluo which plays well with the intense Texas Sun and adds an element of visibility for safety.

The materials used are really top notch, the sleeves are a tad longer than most jerseys I own, but very comfortable nonetheless. My only gripe is the ultra breathable and venting honeycomb paneling which is quite delicate. Yes it keeps you cooler and feels weightless, but I just noticed a tiny snag on the upper back-side. I doubt it was inflicted by me as I only have one 80mile session in it. I honestly think it came in that way and I missed it during inspection. I would definitely recommend hand washing this jersey.

All in all a fantastic jersey and looks amazing when paired with the Silverline bibs with matching leg band.

I have a pair of the original R3 Uomo (sail cloth closures/mesh uppers), which I absolutely love. These were the first shoes that my feet felt truly comfortable in . I've owned all the top brands throughout my 25+ yrs of riding & racing (SIDI, Shimano, SWorks...you name it). These new Fizik are quite different though!

1. They are much narrower in the toe box, strangely size 44 was noticeably smaller than my R3 Uomo, 44.5 was a closer fit with 45 being a hair too long.
2. Not nearly as stiff ,and I realize that they are not a full carbon sole, like the R3 Uomo, but I could feel them flex under my weight on a carpeted floor.
3. Also the cleat holes are placed in a rather curious position, making it impossible to position the pedal spindle just slightly behind the largest metatarsal ball. I've never had an issue with accomplishing this on any other shoe.

I must point out that the floating cleat plate has now been replaced by a statically positioned one, which in all likelihood contributed to the above anomaly.

As we all know shoes and saddles are subjective to each rider's physical characteristics, and what did not work for me may be ideal for smaller sized riders. After all these shoes are impeccably made and fit beautifully over the foot...just not my cup of tea!

Really well made at an amazing price. I'll save this one for Fall since Texas heat is already upon us and this I would say is not an ultra-light Summer Jersey. I am 5'11, 170lbs and XL fits me great. There's probably just enough room for a thin underlayer in the cool months.

Very tight in the arms, and the zipper would not sit flat (bunched up).

Well made, but the breathability factor is overstated and taken to the extreme. It is nothing more than see through mesh. Maybe good for some, but not for me thank you!

This is a beautifully made Jersey, but for those who have Christian Bale's arms from "The Machinist". The armbands are so tight that even an XL was too small.

If you're looking for a race-fit, but have an athletic build and a bit more muscle on your arms than the typical anorexic neo-pro then you'll love this jersey.

It is form fitting, extremely comfortable, light & super breathable. The zipper area manages to stay flat, there's no loose material flapping around and most of all it doesn't feel like you're wrapped in saran wrap.

Beautifully made, strong and stiff and a much better fit for my 3T bars than their stealth stem. Carbon paste, 4Nm for a solid fix.

Love Fizik stuff, their shoes are also quite brilliant. If they ever make a frameset I'll be the first to buy it. 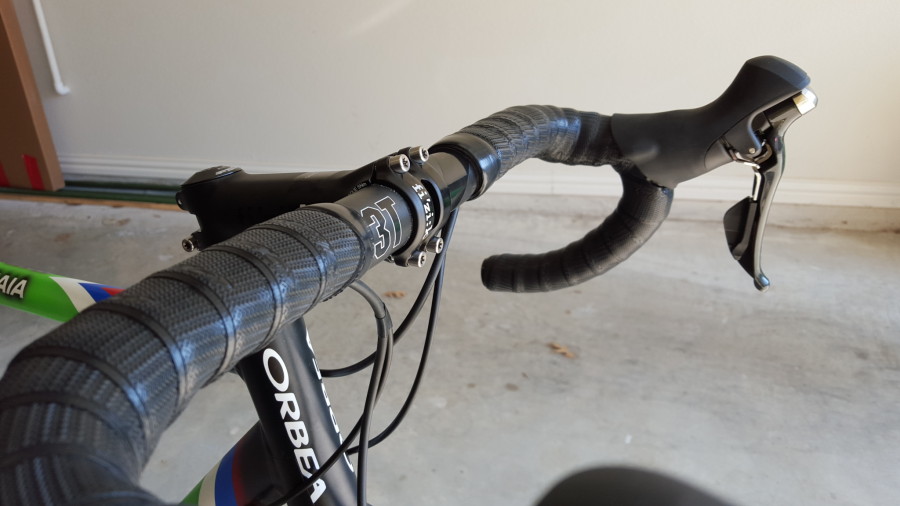 A good bar, BUT not perfect!

First of, I like this bar well enough to keep it, but for the money I wish 3T would work out some of the kinks.

PROS:
-Very stiff, no noticeable flex even under the heaviest of efforts (may partially be due to stem combo, notice no 3T stem)
-Ovalized tops for comfort
-Shallow drop, great transition
-Looks killer

CONS:
-Sizing (not true to size C-C, 42 is more like a 40, had to get 44)
-Small diamater tubing in the drops, had to double wrap
-The drop ends are really short, if you ride in the drops a lot you will miss not having the extra length
-The internal routing is less than perfect. Difficult to route cables in comparison to other internally routed bars, with accute angles leading to binding

Get it if you're looking for a light, ultra stiff, low profile, racing bar with good looks, especially with Di2 or EPS, my Shimano PTFE cable sheathing got trashed during install due to aggressive routing angles. 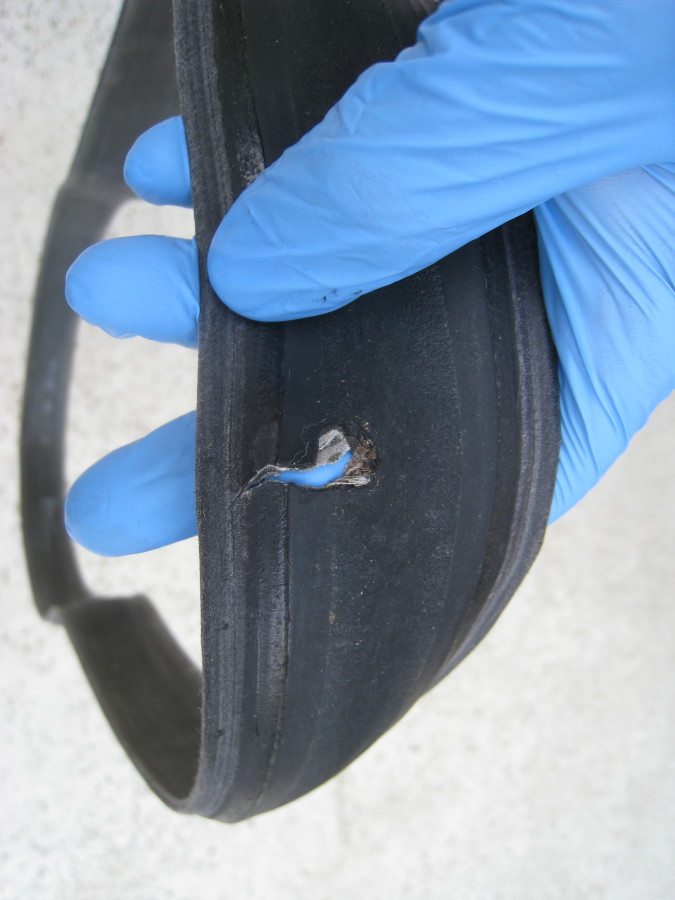 Straight up dangerous to use!!! Tire blew up on me in a fashion which I have never experienced in 30 years of riding and racing.

Brand new, installed on a wheel, a few miles into my ride this thing blew out a chunk from the center of the thread (not a debris flat or a pinch flat). The tarmac was spotless, without any debris. This was a clear case of tire malfunction. One which could've cost me a trip to the hospital.

I consider myself lucky as I had just come off a 40mph descent and rolled onto the flats. I lost air instantly and almost ate the road in front of me.

I have been using Vittoria and Veloflex tires for years and have never had this sort of critical failure. Sadly, the rep at CC seemed bothered when I inquired about returning the other unopened tires and had to request a shipping label.

I could've been seriously hurt. I understand CC doesn't make the tires, but at the very least show some level of care and interest especially considering the severity of the incident. Hate to say it, but CC is not what it used to be.

Regarding the weight. It states that the frame and fork are 1450gr, but actual weight states 1900gr. That's almost 1/2 kilo discrepancy (1.1lbs) . Is this correct?

I'll make it short, because it has pretty much all been said.

If you want tubular-like ride quality without the hassle of tubulars (gluing, flats), pair them with Vittoria Latex tubes and "voil�". You will not believe that you are riding clinchers.

I run them on my ENVE 6.7 clinchers, which makes for a sublime ride. Now go and get some! 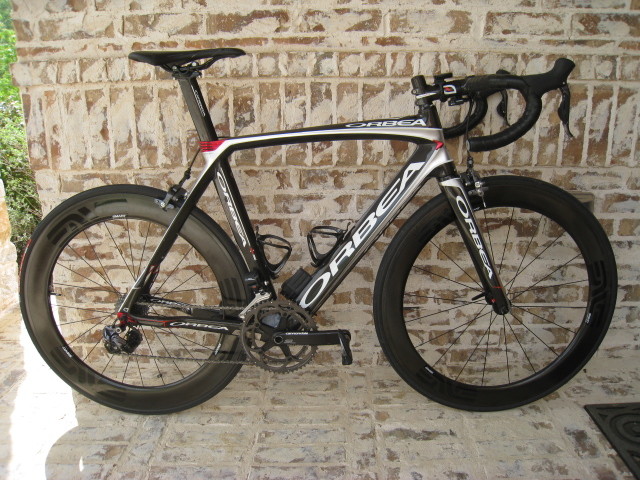 Used ZIPP 404 Tubular Firecrest, which BTW were great wheels, but got tired of gluing and dishing out $100+ when sealer wouldn't hold after a flat.

After reading numerous reviews and talking with guys who have raced on them I decided to take the plunge. Since I already have a 1200g set of light all-around wheels I opted for the 6.7 instead of the 3.4 to deal with fast flat & rolling rides here in North Texas.

My first set arrived with molding imperfections in the lip of the side wall which anchors the bead of the clincher. Of course this kind of thing can happen during the molding/layup process, and CC (like always) took care of it, by sending me a replacement ASAP.

I paired them with Vittoria Open Corsa EVO CX III tires and their latex tubes. First ride impressions...WOW! The DFW area is quite windy and this day was no exception, 15-20mph winds with 30mph gusts. Honestly I was a bit concerned that these were too deep for the conditions.

I was amazed at how stable these wheels were given all the wind. It seems like they were trying to self correct in the crosswinds. I know that sounds crazy, but they just wanted to stay straight with little input...very, very stable!

Speed, these things are fast and feel much faster than their spec weight. I expected them to be slower on take-off, but was pleasantly surprised. In my opinion, they far surpass the 404's in this department. Out of the saddle, they gain speed with lightening quickness (no loss of power). You'll cruise at 25mph effortlessly while your buddies are struggling to keep up. The 6.7s hold their speed Very Well!

They're no slouch when climbing short, punchy hills either, and eat up rolling terrain with ease. Braking in dry is better than any other carbon wheel I've ridden.

I have been using them exclusively for the past year, all conditions including rain, and can honestly say that they are a masterpiece. I was skeptical at first, but now realize that they are "Worth the Hype"

Great for the money!

I just got these and they are the 4mm OD housing, but work great with my 9spd DuraAce setup which recommends 5mm.

I actually had a set of Shimano DA 7900 cables on the 7700 grupset, but can honestly say that these feel more slick providing faster gear engagement.

The only downside are the cable ends, which are too soft and get crushed, and don't stay on. Just get some spares from your LBS.