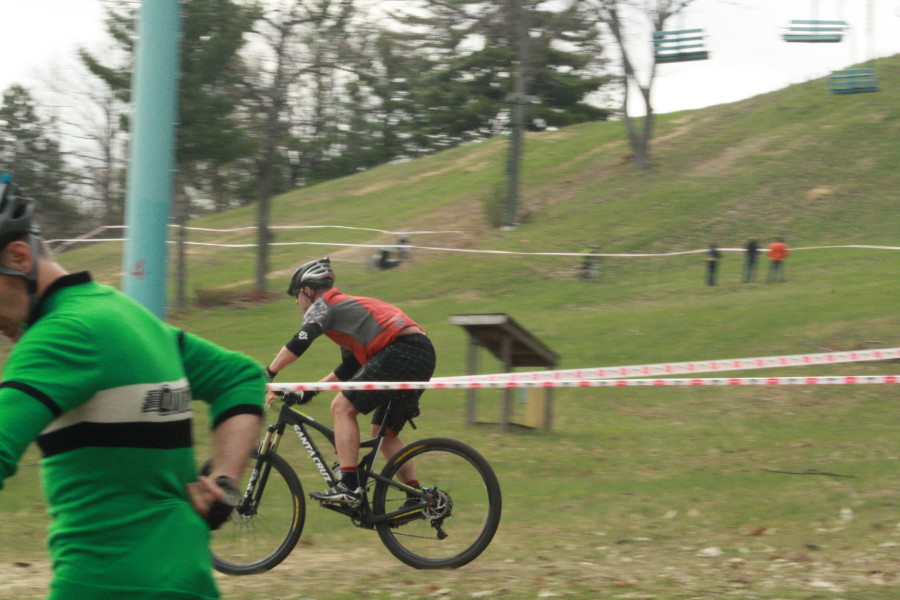 Okay, so I have been in the 26er ages for years, and have not been riding much for the past 1.5 years. My first bike was a custom hardtail, Reynolds steel tubing. Stiff, solid but a blast to ride. My next bike was a Jamis Dakar FS, again, custom build, and then followed by a BMC Fourstroke Carbon Custom. I love that BMC. It's a dang rocket, a super fast bike. The Geo climbs like a billy goat, and the APS linkage felt like a hardtail as far as energy to the rear axle. But I was itching to dip my toe into the 29er world, so I did my research. I was looking at an Ibis Ripley, a Scott Genius, an Orbea Occam or the Tallboy. The Ripley seemed more like an AM/trail set-up; I have always been interested in the Scott lines, but sometimes it just seem like their "smart" bikes just seem too busy for my type of riding, and the Orbea comp spec was so-so in the comparable price range. So I focused on the Tallboy and the rave reviews on their FS Linkage.

Now, I live in Michigan, so it's not as though we have an abundance of super gnarly trails to ride, so the 4" travel can be overkill, but I really liked the 70 deg head angle and the manageable chainstay length. Plus, I must admit, the BMC carbon ruined me. I'm not sure that I could back to an aluminum frame, so I was looking for an affordable carbon frame with a good warranty attached. Santa Cruz stands by their carbon so much that there is a lifetime warranty on the Tallboy. That's a huge plus in my book! I'm used to XT Drives, So the RF Aeffect and SRAM GX 1x11 combo intrigued me, and my research made that another plus. The Race Face cockpit is very similar to what I have had on my last two bikes; pretty light, and stiff = plus number 3. The Fox Suspension System seemed like nothing terribly special, and SRAM hubs and Easton hoops are new frontiers for me, but in talking with the Techs at Competitve Cyclist, it just felt like the Tallboy was the one for me. So I hit "enter" and it was going to be mine! (Actually, I ordered it over the phone. Competitve Cyclist really makes it feel like you're at a bike shop, even though they are 1800+ miles on the phone.)My first initial impression of riding 29ers on the trail, I felt like I was pushing a monster truck. The trail was sloppy, still wet and muddy from the winter thaw, the 1x11 drive was stout and shifts were crisp, the SLX brakes were solid and responsive. I had yet to get the feel of the entire bike, so I would continue to ride the trails that I pretty much know by heart for a bit before any conclusions.Fast forward to today, approximately one month and one XC race later. The component spec took me the whole month to get used to and I like it more with every ride. The drivetrain on my last bike was a 3x10 Shimano, so it is quite a bit different. Now during some of the steeper climbs of the race, I did find myself trying to get at least another gear during the grinds, but that is more about my fitness as it really is a good range and I can see what the hype is about. I am having a difficult time tuning this fork. The fork that I put on my BMC is an X-Fusion Velvet 120, and I actually miss it. It tuned easily and was so smooth. The Fox 32 Performance just feels a little "clunky" to me, but it's a work in progress. I believe the first upgrade that I do will be the wheel set. Not that the SRAM/Easton combo is bad, but I have gotten used to the Mavic Crossmax 4pawl system and could feel a big difference. Plus I have to add air to this tubeless system before every ride. Climbing and tight singletrack handling is great on this bike, I like it more with each ride. Any descent is where this bike really puts a smile on your face. This is a bike that makes me want to hit the trail more and more. Glad that I made the purchase!