I wanted to wait until I had a few hundred miles on this lube before writing a review.

I'd been using T9 on my chain/components for the last couple years but become unsatisfied with its "dusty conditions" performance, so I wanted to try a true dry lube.

I train every morning in the Santa Cruz Mountains and with the CA drought it's been very dry! The usual fluffy trails are now dry, dusty, and loose. It's also been taking havoc on my components and requiring a lot of time to maintain.

After switching to this lube, I can barely tell I rode 100 miles by looking at my chain. In fact, my frame will be covered in dust and my chain/cassette will look new! This stuff TRULY repels dust and keeps it from gunking up your goods. I also noticed significant shifting performance near the end of long dusty rides.

Keep you riding smooth for your entire ride! 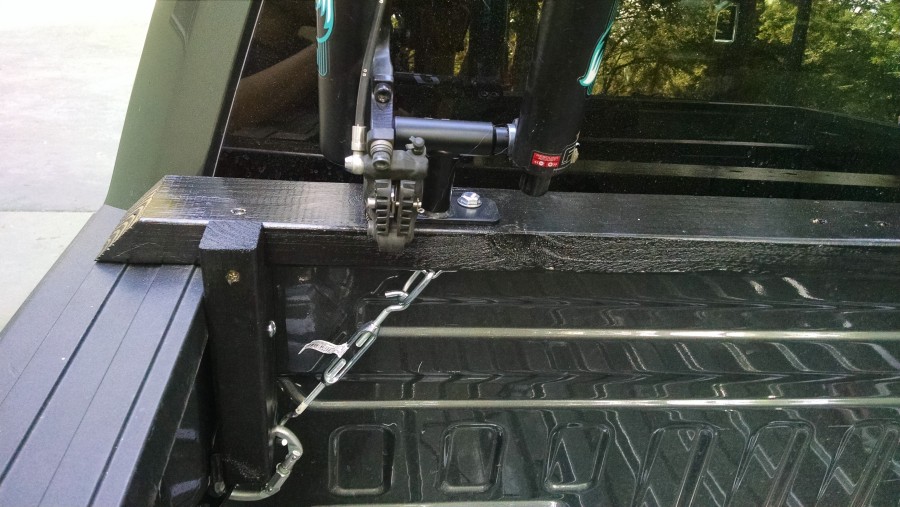 The Simple Way is the Best Way!

These are simple and work great! I was able to build a custom mount for my truck (didn't want to spend upwards of $500 for crossbars) with only 2x4s, some hardware, paint, and these mounts.

I usually hang my bike off the tailgate but didn't want them there for long trips. Even with the nicest pads, they rub on my carbon bikes due to road vibration. I wanted something for 1,000+ mile trips that was more sturdy.

I ordered the regular Podium glasses add they were apparently too wide for my narrow man face. These actually fit a whole lot better!

The glasses are great and having no rim to obstruct your view makes it feel like you aren't wearing anything!

One worry, that I experienced with my regular Podiums, is that during a sweaty activity, the sweat can run down the lenses -blinding you...if I experience that with these they too will go back.

MTNMYKEwrote a review of Race Face Atlas 1/2in Riser Handlebar on September 22, 2015

Race Face does it again!

I needed an inexpensive handlebar for a freeride bike. I didn't want to go as wide as my other 800mm bars so these were perfect. Wide enough for an aggressive stance - narrow enough to fit through tight spots.

Nothing super fancy about them but look amazing and work on a budget. What's to argue about?

Just ordered my 3rd pair! Been using them for everything from racing enduro to cross country rides. They are cool, comfortable and look great! You may say they don't last long if I'm on my 3rd pair...but I ride nearly 125 miles mtb per week!

I think Fox does run a hair small compared to other brands. The Large was way too much. Medium fits like a dream.

MTNMYKEwrote a review of Tifosi Optics Podium Sunglasses on September 22, 2015

Is it my uni-brow?

I read several reviews on this item from different sites and now know what some of the negative reviews were talking about.

The concept is amazing. It's quick to change out lenses and the fit is nice. The lenses go a little above your eyebrow which make it feel like you aren't wearing them...literally windows for your head, but this is its downfall.

In short, they are entirely useless! Now I don't have bushy eyebrows, but as many reviews on other sites have said - if you're going to sweat in them, don't get them!

When your eyebrows ,even lightly, touches these, your sweat will run down them instantly - blinding you. The first time this happened I almost "ate it" because I couldn't see while decending a very technical section of a trail.

They sit so close to your head it's almost impossible to stop this. The Tifosi Lore are the closest I can find to these that have a top frame. I'll be returning these and trying those out.

I decided to try this on my 10 speed and...regret it? I do not! As I could use a shorter cage, the clutch works much better. It also works better on the wide range cassette as the older XT versions weren't really made for 40t and up cassettes.

I'm pretty picky about keeping my chain clean. A dirty chain wears faster, wears your cassette faster, and your chain rings. They also don't shift as well as a clean chain.

I tested this out on my newly cleaned KMC chain and it still cleaned it so well, the cleaner turned black! Nice to know it's actually clean with this!

Further, my girlfriend is terribly about cleaning her chain and I always thought she had darker inner links...my mistake after she used this on her bike! He chain now looks like chrome!

What took me so long!?

Perhaps I was trying to relive my childhood by always flipping my bike over to work on it...but I'm an old man now and the ground is so far away!

This stand is AMAZING! It holds very tight and stable! I've already used it to replace cable housings, derailleurs, brake pads, etc. I can even hold a bike up at different angles as this stand holds so firm.

On top of all that, it folds up to be incredibly small. It will fit nicely under my truck seats for tune ups during racing season/road trips.

I've always used other cable/housing snips and have struggled with frayed cables and smashed housings...until I bought this.

MTNMYKEwrote a review of Dumonde Tech Freehub Grease on September 15, 2015

Needed a new grease for my freehub DT Swiss 240s with 36t ratchet. My ratchet was getting very loud and not understanding the "loud hub" trend wanted to hush it up a bit and reduce friction. After all, sound is friction.

I cleaned up my hub nicely and added a moderate to light coat (you don't want too much or your ratchet won't function properly). This hushed it up a bit and I feel much better knowing I have the proper grease in my hub.

MTNMYKEwrote a review of Continental Tubes - 29in on September 10, 2015

Better than a Tube Top

Are you tired of walking your bike after missing that tranny on your favorite jump? How about after those darn rattlesnakes take a bite out of your current tube?

Do you suffer from flat tires due to gnarlyness, shredfests, or send offs?

Or perhaps you burped out all your tubeless sealant while scraping elbows on that berm?

Regardless of the why, the solution is now here! Get your spare tube now!

(Fine Print: Prices subject to change. I am not responsible for picking you up after tearing your spare tire so please don't message me to do so. No tube is indestructible. If you keep shredding your tubes, please go tubeless or run higher pressures.. If that doesn't work, then you're probably destroying your rims as well and have other issues. Please remember to spay or neuter your pets.

MTNMYKEwrote a review of Shimano XT Bottom Bracket on September 10, 2015

What? That sound isn't normal?

After putting over 3,000 miles on my XT BB, it finally started creaking and making noise. I'm that guy who has to have everything dialed, hates vibrations, and especially noises from the bike!

I bought this and got it installed in under 10 minutes. I was impressed to see it was pre-greased on the threads. All I had to do was clean out everything and screw this in!

Now I realize I should have replaced this months ago!

Keep a spare, replace that BB early, no need to be the guy with the loud bike in the group!