I finally replaced my old Craft baselayers (the original Active Extreme) with the 2.0 (one white and one in that awesome high vis yellow). Craft lengthened the arms & body by several inches and made the armpits vent better, which I like since I found the old cut to be too short. They do baselayer stuff and fit me better, 10/10 would recommend.

I have two pairs of these that I wear daily throughout the winter in Minneapolis for 1-1.5 hrs at a time. The fabric has held up very well to that much wear & washing - the only sign that these aren't new is the shiny outline of my saddle.
Temperature-wise, I'll wear these when it's below 30F (40F if it's wet out) all the way down to -10F; lower than that and I'll wear a pair of Craft's storm tights over for some extra warmth.
PI really nailed it and these are about the only piece of cycling clothing I'd pay full price for without hesitation. 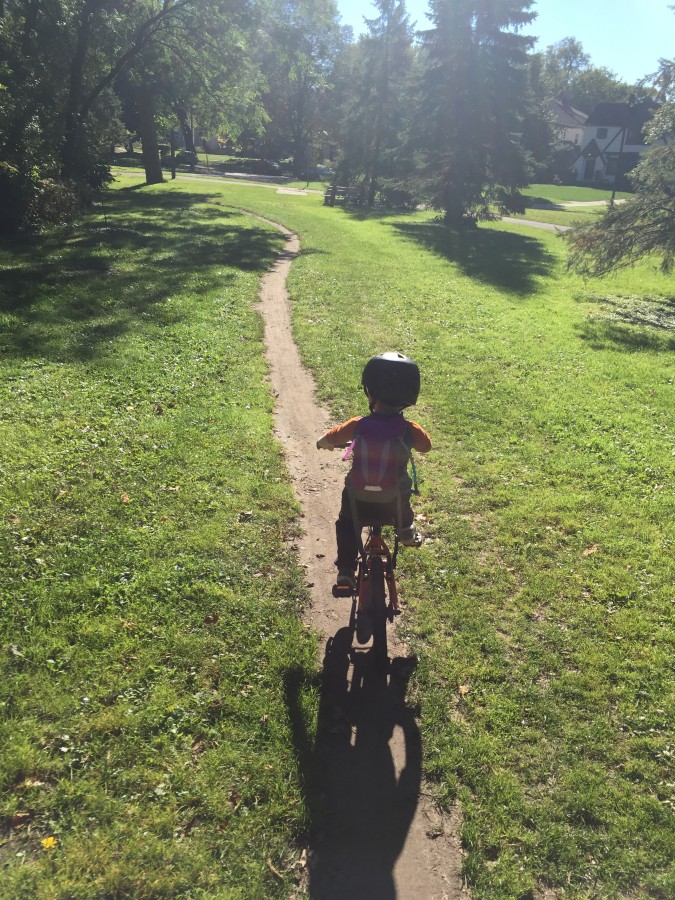 Got this for my son's 4th birthday. He rides a 16" bike so there's nowhere to carry water on the bike - this lets him carry plenty of water and keep riding while drinking so I love it. There's a small zippered spot that fits a spare 16" tube perfectly and his tool roll has a nice storage compartment leaving the larger zippered spot free for treasures. Kid loves it. Only complaint I have are the lack of color options compared to the adult packs.

Greimelwrote a review of Twin Six Thermal Bib Knickers - Men's on May 24, 2016

These had been on my wish list for a while so I grabbed a pair when they went on sale. First ride was 110+ miles over 6+ hours in wet ~55F conditions and they were spectacular. Fit/finish is great, chamois is great. Really the only complaint I have is they provide little/no calf coverage, but that's expected since I wear a medium and have a 34" inseam (with long femurs). Oh well, awesome knickers.

Greimelwrote a review of Kitsbow Race Stripe Socks on March 16, 2016

Like most of my sock purchases, I got these because I thought they looked cool and weren't too expensive, which is probably why you're here. I don't know what people look for in sock reviews, so here it goes:

Unless you have very hairy feet, these are summer weight.

These seem to run large. I usually wear a 45 cycling shoe (men's 11 running shoe) and found the size Large to be a little big. Maybe I'm just used to more compression in socks. Large will work, but I'd order a Medium next time.

They look cool in real life too. My wife said they look obnoxious (which I take as a compliment). Maybe that was the socks or maybe it was the sandals I was wearing them with, we'll never know.

Greimelwrote a review of Cleary Bikes Starfish 12in Balance Bike - Kids' on February 17, 2016

I got this as a Christmas present for my then 16 month old daughter. It's still a little big for her (at 18 months), but my 3 year old son prefers borrowing his sister's pink balance bike instead of riding his old Trek Grommit. He went from basically walking while straddling the bike to coasting for a few seconds at a time within an hour. After a few weeks he's gotten to the point where our house is the limiting factor to his balancing (winter in Minnesota leaves few outdoor options). Still adjusting to the braking, but he is fascinated by pulling the levers and watching the brakes move - he's much better with the hand brakes than the coaster brake on his bike.

Now he wants a bike just like his sister's but with pedals (his words, not mine), so we'll be upgrading from his Grommit to a deep blue Gecko/Hedgehog for his birthday.

There are cheaper options, sure, but I have yet to see anything as well equipped as the Starfish for less money.

Update 3/30: Still love the bike. After 3 months of daily use I put the wheels in the truing stand; after ~1/4 turn on 2-3 spokes per wheel they're perfectly true. While the wheels were off - the factory pre-load on the hubs was a little high, so I cleaned & re-greased the balls & cones (totally unnecessary it turns out) and set the pre-load a little looser. Now the wheels spin forever and the kid flies around at 6-7 mph pretty easily.

Awesome, especially at 50% off

Disclaimer: this had been on my wish list for a few months so I impulsively grabbed it while it was on sale for half price.

This jersey is great. Even without putting it on you can tell it's extremely high quality (fit/finish, weight, etc). The inaugural ride was right around freezing with little wind and this kept me perfectly comfortable for a 2.5 hour ride with just a long sleeve baselayer underneath. The cut is less tuxedo-like than my road cycling jackets, so it doesn't stand out off the bike.

Comments on other Kitsbow reviews are full of negativity towards the price. Pricing is in the same ballpark as Rapha and Assos. Canadian-made, top quality materials, thoughtful design, and awesome manufacturer support make it a steal (for me at least) at half price; not sure if I'd pay full price, but Kitsbow will let you try it for free so you can decide for yourself.

Bonus: my name starts with a K, so it came pre-monogrammed for me.

Update 3/16/2016: I've been wearing this almost daily for the past 2-3 weeks and it's been great. Really shines in the 30-50F temperature range. Kept me warm in drizzle but I'd grab something else on a rainy day. About the only negative I can think of is the elbow padding looks a little dorky (although it worked great when I wiped out on a patch of black ice - my elbows didn't have a scratch but my hip & knee weren't so lucky).

Greimelwrote a review of Speedplay Zero Aero Walkable Cleats on May 31, 2015

Much better than the covers

I've been using these cleats for about a month. No complaints at all. I have the original cleats with the coffee shop covers and I like these much better. Some people had issues with the yellow part coming off but that hasn't happened to me yet, even after about a thousand miles. The little caps don't seem very useful since I have no interest in packing them with when I ride - they're guaranteed to get that nasty grease/dirt/oil slurry all over whatever you put them in.

The only thing that would make these better would be offering some color choices. And if speedplay would get on board with hex screws.