How tall are these socks?

These are one of my favorites treats from Clif Bar. The Berry Almond flavor is pretty tart which I love. These are pretty simple,meaning, there's a short ingredient list of whole foods. Plus they're organic! 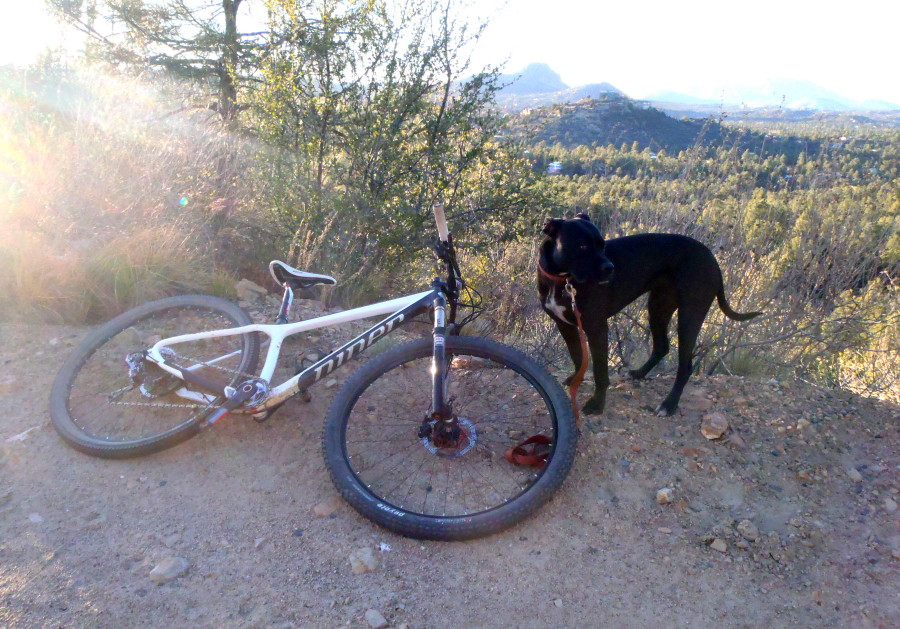 Since I live in Arizona, it's not often I have to tough out rides in temperatures around freezing, or lower. But a few weeks ago, I raced in freezing temperatures and ended up using these gloves. While I wasn't out in the cold for long, I was pretty surprised that my hands didn't go numb in the time I was outside. The downside is that you lose some dexterity with all the bulk. But I think that's a reasonable compromise for comfortable hands. I also noticed that my thumb was restricted in these gloves . But this didn't seem to affect their comfort or fit while riding a flat bar or hoods.

I have very small hands and it can be tough to find gloves that fit. Luckily, Gore makes quite a few small sizes for their women's fit. I fit comfortably in the XS glove.

These gloves offer comfort down to temps around 45 and don't compromise dexterity much. I appreciate the small reflective details on the fingers and the extra padding for grip on the palm.

This jacket packs easily for any adventure and it's a great do-all outer layer. My favorite thing about this jacket is that it looks great, on or off the bike. I'd prefer some roomier pockets and I'm not a fan of water-resistant zippers as they're just harder to use than normal ones. But that's me being picky. This is the nicest jacket I've used for training and now that the weather is a little questionable, it's a great one to bring along just-in-case.

So far so good.

I've heard about many of the issues with the Garmin 800 series and have been cautiously waiting to write a review until I've had a chance to use mine for awhile. As a word of caution, I haven't fully used many of the features on this device and I probably won't. I tend to set it up and leave it.

First, I used the same Garmin 705 for 4+ years and it still works. I'm not convinced I'll get the same longevity out of the Edge 810 device but only time will tell.

So far, I haven't had a single problem with the software. My device has never frozen, failed to turn on or lost any data for no apparent reason. The battery life is not impressive but since I don't ride more than 7 hours in one stint, this hasn't been a problem (unless I forget to charge it for a couple days in a row).

The feature I like the most is how you can setup all your bikes and the device 'remembers' all your settings. This is really convenient when you switch between bikes frequently.

I thought I'd use the remote tracking feature on occasion but I haven't even used it once. In theory, it seems like a really smart idea for longer training rides. But the reality is that I haven't felt like I've needed it and, well, a solo ride should be a solo ride.

The bottom line is that my Garmin 810 has been reliable since May (when I first got it). It seems like they've worked out some of the bugs. I'd definitely buy it again.

My one and only hydration pack!

This pack has accompanied me on many rides since Fed '13 and it's the perfect size for 2-4 hours of riding. Additionally I use it for short hikes and trail runs with my dog.

Osprey solved a simple problem with their magnetic bite valve. It keeps the hose from flying around by securing it to the chest strap--brilliant! This pack is the perfect size for rides lasting 2-4 hours. You can pack a surprisingly large amount of food and clothing into the two zippered pockets and the compression sleeve. There's a small mesh pocket on the left shoulder strap which I stuff with used gel and bar wrappers (this keeps your pockets, pack, and trails clean!). It's also a breeze to fill up the reservoir with water and the mesh back panel does a great job at keeping me cool on hot Arizona days.

The only problem I've encountered is that I tend to bite through the Osprey bite valves...whoops! Osprey sent me a few replacements so I'm set. Bottom line, this is the best pack I've used.

I've used this helmet on a handful of rides and find it a step above the Louis Garneau X-Lite Helmet as far as comfort and security is concerned (the drawback is that it's 75 grams heavier). Needless to say, I was surprised by the reasonable price point. The white color is attractive, the vents provide ample cooling, it's very comfortable and the spiderlock pro provides a secure fit. Two thumbs up and at the current price point, it's a steal!

Great deal but they run a little large.

Stoked to get a great pair of trail running shoes but the sizing definitely ran large. Overall they seem like a great shoe and I exchanged for one half size smaller. The quicklace system seemed to come with an excessive amount of lacing so I'd need to tuck the extra back into the shoe. But that's not a big deal in my book. They look great and Salomon is a reliable brand.

The concept of rain shorts is a new one for me but they're a great alternative to a soggy chamois or baggy rain pants. I've only used my pair on one occasion but it was enough to get a feel for them. First, they're designed to slip over lycra shorts with a chamois, or that's how I used them. They certainly kept my shorts dry in some moderate rain and kept me warm without turning things into a sauna. The bagginess of the shorts actually lets some air circulate which is probably their greatest advantage over rain pants.

Now for their look...I have to admit I didn't think they were all that flattering but this probably isn't the most important thing when it comes to rain shorts. The shorts reach my knees in length (but I'm 5' 2") and they make some noise while pedaling (that swishy rain gear kind of noise).

But they are certainly effective and a better alternative to rain pants. Gore Bike Wear makes some of the best gear in the business.

I have to admit I'm pretty pumped about these socks. They have a 6.5" cuff (washed) which put them into the tall but not-too-tall category. And they have goats on them.

I was actually surprised to discover (from the description above) that these socks aren't a wool blend as they have that kind of feel to them. They are comfortable, don't move around and moisture wick adequately. The graphics are understated which I like.