Accidents happen, but some can be avoided with a little preparation. The Portland Design Works Red Planet Tail Light puts you one step ahead of danger. Named for our bright red galactic neighbor, the Red Planet is also your ticket to not getting a light ticket.

Portland Design Works' Red Planet Tail Light features a simple, no-nonsense design. It uses five LEDs to illuminate the darkness in your wake. Three of the LEDs point straight back into the eyes of drivers, while the two outer LEDs project outwards for side-to-side coverage. The lights are affordably powered by two AAA batteries, and the whole sub-50g system is housed in a durable, water-resistant plastic case.

The Red Planet has three strobe settings -- steady, blinking, and 'kitt.' We're sure that you can imagine the actions of the first two, but 'kitt' was something new to us. This mode sweeps across the LEDs, side to side, much like the voice of a certain 1980s talking car of the same name. So, when you're a 'rider of the night', and you don't want to be just another blinky-blinky on the rode, you can activate this function to stand out to the inattentive driver.

For easy attachment, the light comes with mounts for your seatpost and seat stays. PDW also included a backpack clip if you think that your bike is too pretty for mounting hardware.

The Portland Design Works Red Planet Tail Light is available in one color and in 32x70x43mm size.

Easy to take on and off!

I love how easy it is to take this light on and off my bike! I don't do a ton of commuting, but when I do it is usually in the evening when it cools off. This makes me feel really safe when riding in the dark! Safety never takes a holiday!

Picked up this little guy to attach to a pack for city riding. So far it's working great, haven't been hit yet!

I commute via train and longboard to/from work every day. Now that Winter Solstice is approaching, I commute in darkness both to and from work and I needed something to clip onto my backpack. This light helps keep me visible while kick-pushing my way down the road. Reflective tape on my helmet wasn't enough, but this light definitely helps keep me visible. I've gotten caught with it in the rain and it still works great. My only complaint is the backpack clip. It's not very secure. I'm not sure if someone swiped it on the subway, or it just fell off, but either way, the clip is not sturdy enough to keep small bumps or sticky fingers from easily swiping it off my backpack. One day it was there, the next it was gone. So, I had to purchase another one. 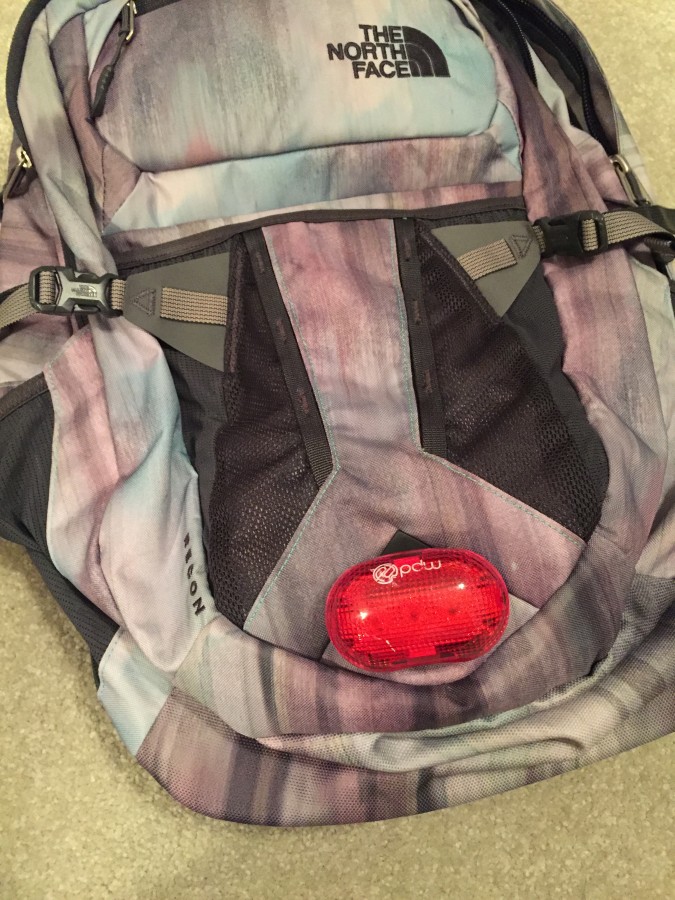 Ok for night time, not good for daytime

Easy to mount, amazing battery life, good side visibility but all that is useless to me because this light is not bright enough during day time. I used it on my wife's bike and whenever she rides in front of me, I realize how little contrast\attention this light provides.

Put this on my commuter bike, and feel much safer. It works great and easy to attach.

Safety first! I ride my road bike in Big and Little Cottonwood Canyons and this light does a great job of letting traffic know you are there. It is important to use it with good riding technique. Stay on or near the white line, if you are to far off the road it is more difficult to see you. I only use the solid light option as I feel the blinking light is more of a distraction to drivers. I would recommend this light.

Can you say RED?

Works great! Cars that are coming up on me can see me, and that is nice to know.

can you see me now?

the answer is YES! this tail light puts out alot of light, so that you will be seen by all the cars and other bikers on the road. the batteries last a super long time, it has multiple flash settings so you can be different from the other riders out there with there flashing lights. very easy to take off or put onto your bike. if you ride at night, this is the tail light for you!

Mounted light on the back of my Topeak rack. Light has the clip mount. This fit into the mount that Topeak supplied with the rack. Like the Kitt blinking feature.

Best tail light you can find for the price! 3 settings all rock

After having the Flea USB lights for years and always having them break or get lost, I decided to get something that I could just change the batteries if needed, and have it as a little bit more of a permanent fixture on my bike. This thing does all of that, with lighting features better than the Flea. The side lights are quite obvious, I've used it for a few months now and haven't had to change the batteries yet!

This is a neat light from a neat company. Check out this little vid the PDW folks put together. They had a light party with their whole product line!

I am excited that I bought this light so that I am seen while night riding. I typically ride my bike to and from work so it is important that I am seen on the commute back home after dark. I love that this light was easily installed to my bikes seatpost and the multiple settings are rad!

Pretty stoked on this taillight. It fits onto the seatpost well- it slides on and off the mount, but not as simply as the spaceship headlight. (Still pretty simple, though) I like the added benefit of the side face LEDs as well. And Kitt mode is a plus for those nights you just wanna feel cool.