Rather than spending your riding life in the dangerous dark, embrace the illumination of Portland Design Works' Radbot 1000 Tail Light, a pint-sized but powerful rear beacon with brightness that rivals that of a car tail light, so you'll be easy to see when you're pedaling along with traffic. With three modes—zZz pop, Cornea Blitz, and Rock Steady—you'll be able to choose between a strobe, flash, and steady beam, and enjoy up to 30 hours of power on two AAA batteries. The Radbot's water-resistant case won't fizzle the electronics if you're riding through a rain shower, and convenient seatpost, rack, and backpack mounts let you slap it on wherever you want and pop it off when you leave your bike outside for the afternoon.

Hard to believe but no one thought to include the dimensions of the light. Like in case there might be obstructions on mounting to a seat post that already has a saddle bag on it.

Got this as a gift for my Mom and she loves it. It' s super easy to attach to the seat post and bright enough for riding on stormy days. Like it's mentioned in a few other reviews it has the reflector on the bottom as well so it really is a two for one deal. Can't say enough good things about this little light! 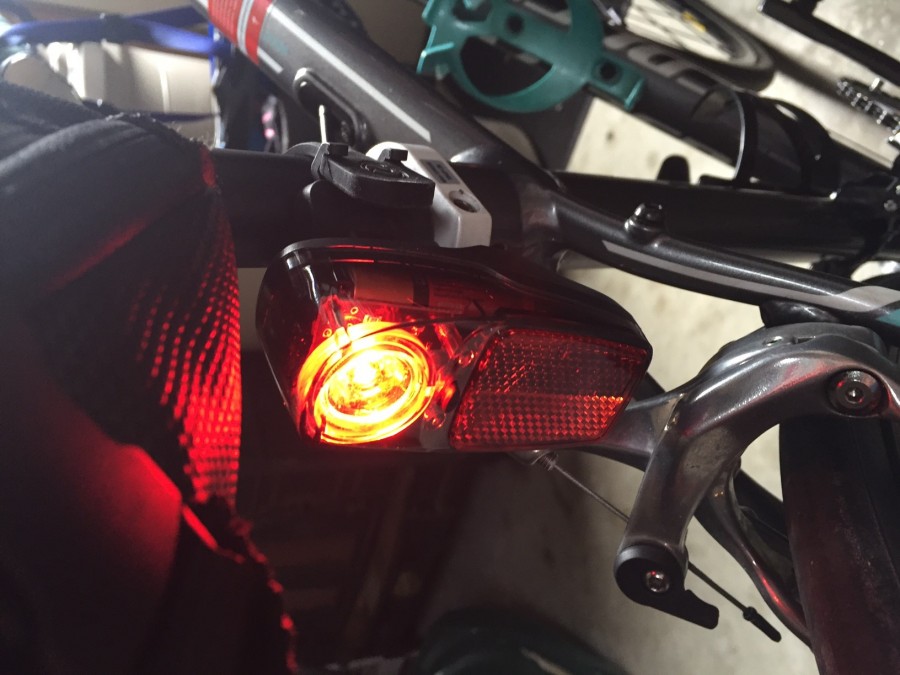 Good but not great

It's a bright light and does it's job in that sense, but it eats through batteries. I commute each day to work by bike and also run some errands here and there. I replace batteries about once a month - wish it was rechargeable.

You can buy rechargeable batteries...

Yeah, just buy some rechargeable batteries. I have this light and I use Eneloop AA NiMH batteries and they last a very long time. It's a great light!

Not much to say here that hasn't already been said. It's durable, long battery life, bright, great lighting modes, and has a nice reflector in case the main light isn't enough for you. My only gripe (if you can even call it that) is that the button to activate the light is a little small. I do a lot of winter riding and it takes an extra millisecond to turn it on with gloves. It's sad that that's the only thing I can think of to critique the light. For the price, you can't beat it. It's not the lightest, smallest light on the market, but for the price it can't be beat!

A winner on several fronts.

This is a very bright light with several options for blinking. It is very bright and seems to get the job done. As part of the overall structure, it also has a passive reflector, I'm not sure if this is necessary but it's there as part of the overall design. Also, in order to access the batteries you have to unscrew the compartment, which to me isn't as convenient as it could be. The rubber strap that connects the unit to your seat post has worked very well and is a clever secure design that is easy to use.

SUPER Bright! Attaches easily and securely to your bike, bag or back pocket. Love the 3 settings, and including a good reflector along with the light function was an excellent move as well. Have been using it frequently for about 2 months and haven't had to change the batteries yet. Awesome light for the price! 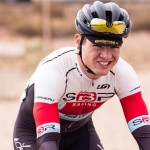 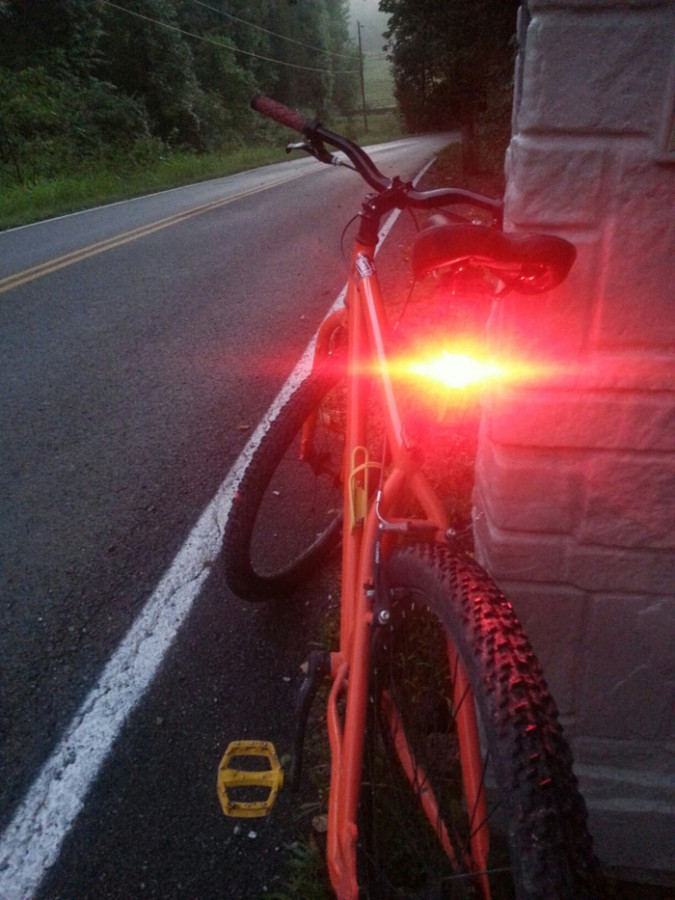 When I lived in PDX, I was commuting via two wheels to my work at least 3-4 days a week. Within a couple months of moving there, autumn started setting in, and the dark rides home became a bit treacherous. So I did what anyone on a budget would do, hit up the 'bay for some cheapo ten buck tail lights. Yeah, no, baaaad idea! The few that I went through, throughout the month, either suffered from some kinda water malfunctioning, or went flying off my bike and blew up on impact if I did anything remotely "not smooth." Bunny-hop, yeah right, it's gone, go off a curb, it's gone, hit a slightly raised sewer lid, gone! WTFZ!? After finally getting fed up, I started asking some of the commuter dudes and dudettes at my work what they used, and the majority of them suggested the Radbot1000! Without hesitation, I sprung for one- local company, insanely crazy light mode, and a cool name?! COUNT ME IN! Aside from the insanely crazy light mode, the Radbot1000 actually stays clipped on to the bike! Occasionally, I'd take shortcuts down a flight of stairs, maybe hit up some dirt trails with a drop or two, the Radbot1000 is still on the bike! Oh and another thing, it still works with all the rain PDX can dump on you too! BOOM! Fast forward a few years till today, the Radbot1000 is still going strong; currently being ridden around country roads down in the South. So far, the only downside I've found from living outside the big city, some folks (3 separate incidents with tractor drivers) are not too keen on the seizure inducing light blinks the Radbot1000 can throw out, so beware!

I've used many different lights, I recommend this one for brightness, blink pattern, battery efficiency, and for the built in reflector which is important. I like it alot and bought a second one for my bike trailer after using the first one for almost 2 years. These things are durable and a great price.

Modes for days! I love all the options. I love this light because its so bright! You can see it from the sides as well which is nice! 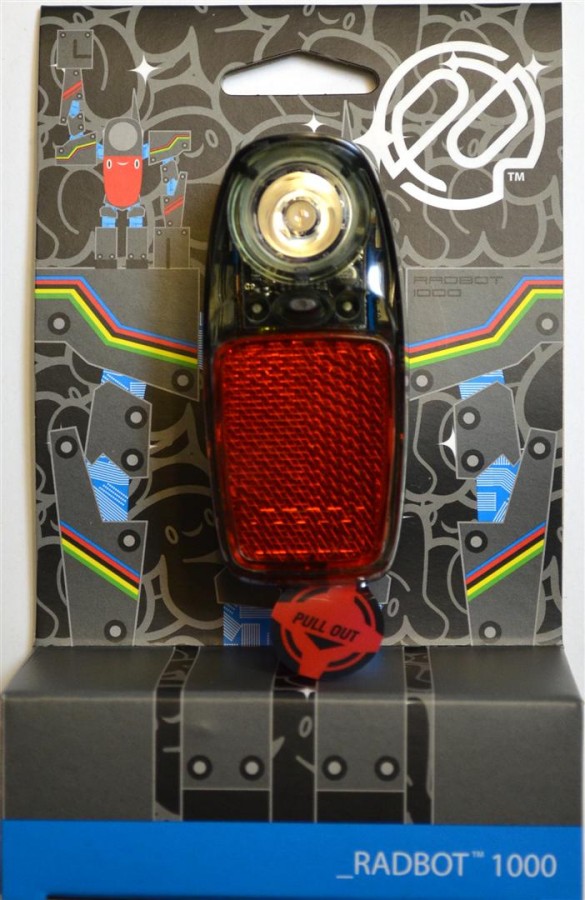 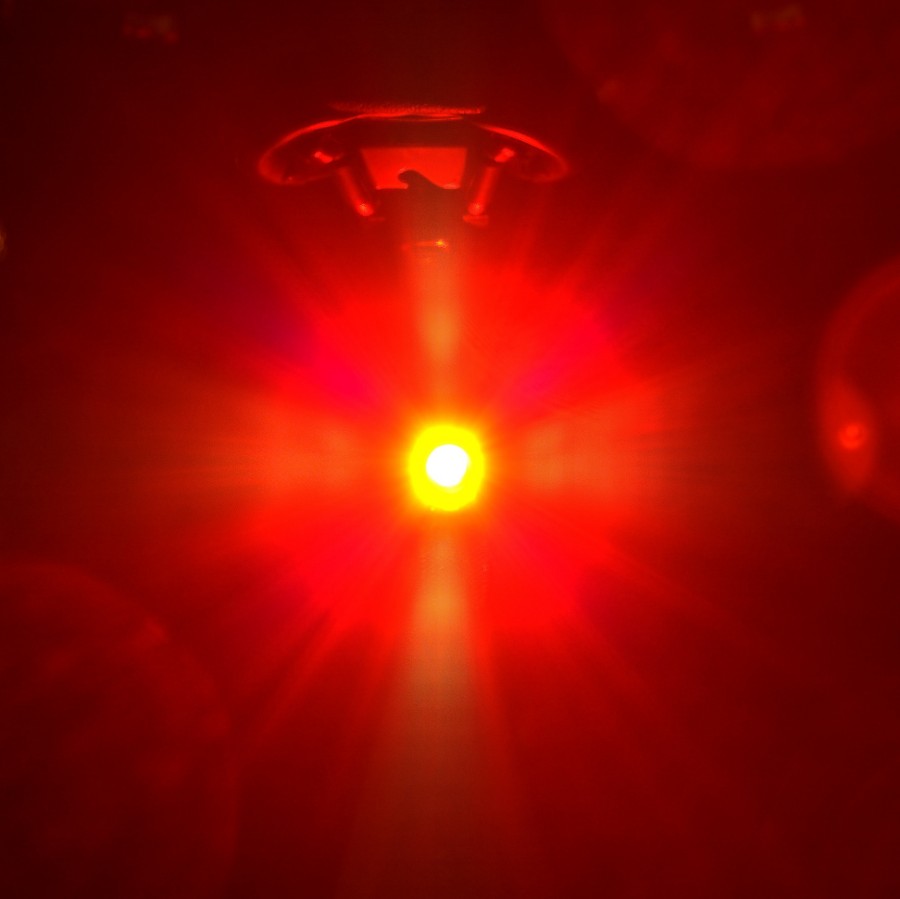 This little light is super cool. It's very bright so I feel safe riding at night in the city. The price is right in case it breaks or is stolen. I did drop it once and it wouldn't turn on but then I noticed that it opened up a bit so when I snapped it back together it turned back on. Did not break! I think it's an awesome product! Hope it lasts.

I was in my weekend group ride and noticed someone with this tail light. Its hard to miss in the middle of the day b/c its so bright. The blinking pattern was also unique and I suspect kept motorist aware. I'll be getting one.

All the Right Stuff

I run this as my primary taillight on my commuter. It appears well built, it's easy to attach and remove from your seatpost, it's easy to switch on and off, and the light modes are as described (an assault on the senses). I would call this a no-brainer purchase if you're a city commuter.

My wife commutes to work on her bike pretty regularly and after having almost clobbered some guy at 6 am with no lights on his bike, I bought my wife about ten of these things and forced her to have them all on her bike when she goes to work. So I didn't actually get her ten of them because one was bright enough! It was easy to attach to the bike and has worked great the past 4 months since we got it.