This product can expose you to chemicals including N/A, which is known to the State of California to cause birth defects or other reproductive harm. For more information go to www.P65Warnings.ca.gov.

Great helmet, very very comfortable. It feels like one with the head and it stays in place and never moves around. I have Spec Propero III for comparison, which while being the correct size and tightened enough(can’t tight any further as it starts giving headaches due to being too tight) still tends to very slightly slide up or down during the ride. This helmet just blends in, and I never notice wearing it. I got Small(head circumference 55.5 cm - right on the edge). It definitely feels snug, but not too small for me. In addition, it vents really well too, my head is never too hot. Very happy with this helmet.

I’ve had the original POC Octal for some time now and I love it. It’s a great helmet. This helmet improves on the model. It’s still a super light helmet that feels more substantial than most others in protecting your head. However, loses some of the bulk and the weird way the straps stuck out. It looks neater and less bulbous and the straps sit flush to the face. Which, works great with non-POC glasses. The eyeglass garage has even better grip than the previous version. The Spin technology is a tremendous win for me. MIPS additional layer always seemed like an over done solution. SPIN uses existing pads with no added layer, heat, or discomfort. Great Job POC! Sizing definitely is a little different than the Octal. I was using a large Octal. However, I was able to fit in the upper range of a medium in the Ventral. Which, I was cool with. It still has that POC look but The medium looks a little smaller on my head. For being an aero helmet it vents very, very well. Even on hot days it is more than adequate. Those large front vents pull in plenty of air. I have a few helmets and this definitely my favorite. The white color is highly visible in those early morning or late afternoon low light conditions. It definitely my go to helmet during those times. 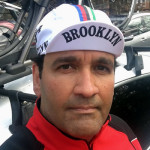 Pretty nice helmet. I have a POC MTB raceday, top of the line, whatever it's called. The MTB helmet is deep, maybe a bit too much as it occasionally bangs into my glasses but it's pretty comfortable and nice, and light and has a good retention system. This helmet feels pretty shallow, I wanted to get the base-of-skull ratchet system as far down as possible. Comfort is good for a helmet with a rotational protection system (POC proprietary in this helmet I guess, not MIPS). I've yet to put on a MIPS helmet I would wear due to comfort issues. This helmet seems like it would be relatively aero and vent well due to the relatively standard aero designs these days of vents in the front and solid plastic on much of the back so when your head is down air is mostly moving around instead of through the helmet. Alas, I never tried this baby because it sticks out on the sides a ton and makes me look like a mushroom so I sent it back.

I bought the Sm- and the Med at the same time to try both. The small fits just like the measurements on the package. Lots of adjustments to the inner cage with 4 notches extending the disk down the nape of your skull. This places the dial where you need it. Then adjust the tightness via the dial around your head. My head is a 54cm and narrow side to side. This fits awesome, the buckles and strap system is well placed and very nice , close fitting to the temples and jaw. As far as aerodynamics, it feels faster than my previous Road helmets , ie less drag on the skull when going 25 plus, or into a headwind . ItÃ¢ÂÂs light and seems to disappear when on. ThatÃ¢ÂÂs the best compliment I can give it. I like the spin pad system . Makes sense. The helmet is well built , very high quality all around. Only thing I would like to see would be a bit more room over the ears for sunglasses, but that could be how the helmets fit me. I have that issue with most helmets in the winter when wearing a thermal skullcap as it pushes the ear bows out. With no skull cap, no problem. Highly recommended. DonÃ¢ÂÂt base your sizing off the fit of other POC helmets, as I ordered the OCTAL Spin in small and med. and it fits slightly different. I did a 3 day stage race this Friday-Sunday and loved the helmet.