55
5 out of 5 stars2Reviews
Fit guide
Geometry

In Pinarello's internal brand hierarchy, the Prince Ultegra Road Bike slots in just below the revered Dogma lineup. It's got a race geometry and many of the signature features that set the Dogma apart, but it's made from a slightly heavier carbon lay-up. The net effect is that the Prince brings Pinarello race tech out of our dreams and into our hands. Since we've situated in terms of Pinarello's hierarchy, it's easy to think the Prince is a budget bike for racers who value "high performance" but can't accommodate the correspondingly high price. That's not the case; the Prince is a race bike through and through, every bit equal to the pedigree of its namesake.

The Prince receives Pinarello's advanced asymmetrical construction, aerodynamic touches at the dropouts and the head tube, and the Di2-friendly Think2 E-Link port on the downtube. The flatback tube shaping not only makes for a subtly aggressive and performance-oriented silhouette, but also improves the aerodynamic advantages of the Prince with a rounded leading edge and a truncated trailing edge. You'd be excused for assuming this is simply a Dogma made from slightly heavier material — we certainly did when we first threw a leg over its top tube.

A Dogma for 1/2 Price, After Upgrades

I got my bike last week and have already put a couple hundred miles on it. It's incredibly fast and fun ride and is a great value next to Pinarello's top of the line Dogma which is about 3x as expensive and shares most of the same geometry. Aside from lighter carbon and a slightly more aggressive frame - which will likely only matter to racers - the big difference between the Prince and Dogma is in the components. Pinarello seems to have gone out of its way to equip the Prince with crappy parts in a few areas as a way of distinguishing between the two lines. The good news is that's easy to fix and the result is a bike stacks up well the what is arguably the fastest and most winning bike on the market for 1/2 the price (or less). Wheels - As others have noted, the stock wheels are truly bottom of the barrel. Riding this bike on them defeats the purpose of buying a high-end road bike. If this is the top of your budget, you'd be better served by a less expensive frame or a better out of the box bike like the Kestrel Talon X Dura-Ace which is comparably priced but comes with aero carbon wheels and a higher-end group set. But, if you can shell out a few grand for a set of performance wheels, you'll end up with a much better bike. I went with the DT Swiss ARC 1100 Dicuts which I'm running tubeless, but any aero/carbon wheel should make a big difference. Wheels are by far the most important upgrade, but I made a few other small changes as well to improve the speed and comfort. Handlebars - The stock handlebars are alloy, overly compact and not especially aerodynamic or comfortable. I swapped them out with carbon Easton EC70s which are faster, lighter and much more comfortable. The Easton's are a great buy, but if you really want to match the Dogma, Pinarello sells a version of the integrated carbon headset from the F12 (Talon) that is compatible with the Prince but its super pricey. Saddle - The included saddle is pretty budget as well and I found it both uncomfortable and heavy for its shape. I swapped it out for a Fizik Arione R1 which is both comfortable and light thanks to their performance foam and carbon rails. Groupset - I was initially concerned about the Ultegra group set, especially the crank which is on the heavier side. But have found it to be nearly indistinguishable from the Dura-Ace group and carbon crank which I'm running on another bike which was a pleasant surprise. All in all - I'm thrilled with the bike and would welcome a head to head with a Dogma. If you can upgrade the wheels I'd strongly recommend this bike (10/10) if not I'd look for alternatives. 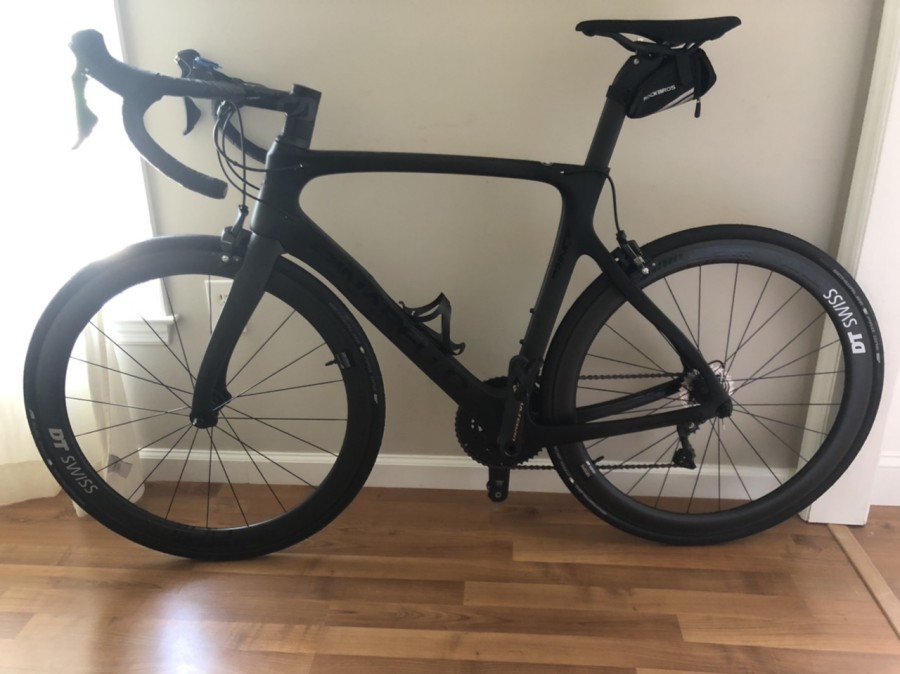 Put several hundred miles on the prince now and absolutely love the ride. 10/10 recommend this for anyone that can afford this bike (and a wheel upgrade). The bike is a great harmony of being super light for climbs yet aero and zippy for the flats & descents. Descending is where this bike REALLY shines. Great cornering, high speed stability, and semi-aggressive frame build make for a really fun ride. The stock wheels suck but you really get what you pay for in my opinion. Which is a quality frame. If you can afford the bike you can probably afford to upgrade the wheels anyway. My only regret is going rim over disc brakes. It is a descending machine and the better stopping power could have helped with going down switchback style turns. Still, even the rim brake version has great control and can get you through any scenario. This bike is definitely a “one quiver” bike for road cycling.