55
5 out of 5 stars4Reviews
Fit guide
Geometry

Many of us are familiar with Pinarello as the brand of bikes that Team Sky powers to some of the most prestigious road race victories on the calendar. We marvel at how quickly the pros are able to ride their bikes and appear nearly tireless during the longest stage races and often wonder what that sensation would feel like. PED jokes aside, what if we told you the Dyodo eRoad Bike from Pinarello allowed you to do just that and whether you're just getting into road cycling and you'd like to keep up with your buddies, wonder how much more you'd commute with electric assist, or maybe you have a health condition and want to ride just as fast and as far as you used to? Well, electric assist can help. Of course, it doesn't hurt that the Pinarello Dyodo has the same design and clean lines as its World Tour winning Dogma and you'd have to look real hard to even notice that it's an eRoad bike.

The good news is the Dyodo also rides like a Pinarello should thanks to its material choice, tapered steerer, and geometry. What you get is a bike that's stiff under power, corners like it's on rails, and its super light as well, with power assist on demand. Pinarello builds almost all of its frames exclusively out of carbon fiber, so getting the frame construction were it needed to be wasn't a hard task for the brand, however, the Dyodo differs from the brand's first eRoad offering, the Nytro, by moving the motor to the rear hub, in this instance, the Ebikemotion X35 pedal assist system, and the battery is hidden away from sight in the frame's downtube. The motor and battery only add 7.7lbs to the build making it one of the lightest pedal assist systems on the market as well as one of the cleanest looking setups.

The hub-based motor adds 250-watts and is powered by a battery that's fully recharged in 4 hours. This allows Pinarello to get the center of gravity low and allow it to build the frame, especially its downtube and bottom bracket junction, retaining a house-favorite Italian threading, much like its traditional, non-eRoad frames, where it enjoys class-leading stiffness and weight numbers. It uses T700 unidirectional carbon, just like on the brand's Prince, as its proven itself to be very lightweight but also very resilient. Another returning frame construction feature is its asymmetrical design building in extra strength and responsiveness as the bike sees different forces on the drive and non-drive sides.

Pinarello also recognized that cheating the wind is just as important in saving yours or your batteries' reserves and employed aerodynamic features we've seen before on its Bolide and Dogma F10 frames to the Dyodo, think Flat Back tube profiles and fork flaps, helping to smooth the passing wind and reduce turbulence. A quick peek at the geometry chart reveals that the numbers are more akin to a race bike than and endurance cruiser and that translates to stable handling at speed with just enough agility on twisty descents.

The pedal assist motor will help up to speeds of 20mph, after that, you're on your own. Battery life depends on many factors including elevation, rider weight, wind etc., however, a good approximation is around 4,000ft of elevation gain in maximum support mode. Pinarello is working on an additional water bottle mounted battery that can double the range. Furthermore, the Ebikemotion hub is set up with a PAS Sensor that uses 20 magnets to detect how much power to add or disengage to your effort so you don't incur undue friction while coasting. Unit controls happen via an iWoc button that's easy to reach on the frame's top tube. You can choose the level of support from zero to maximum with a press of the button and the system pairs with an app where you can customize settings for each push that's easy to access from your phone or a smartwatch.

Other bike features include a full SRAM Force build kit complete with hydraulic disc brakes. Cockpit duties are handled by Pinarello's house brand Most and the rolling stock consists of Mavic Aksium Tubeless Disc wheels. Altogether, it’s a bike that will literally give you a boost on group rides and allow you to ride with speed even if you don't have the time to train like a pro.

The carbon frame components make this bike look and feel good. Like any other road bike but better.

Pinarello Quality with A KICK!

I have had reservations about ebikes but this year changed my mind when I saw the Electra Moda Cafe Go and decided it would be a fun commuter bike and it is. I knew Pinarello had ventured into road ebikes, and I own several Pinarellos. Competitive Cyclist, who I have done business with over the years, made me go for it when they put the Dyodo on sale. The bike has been great so far, handling like on rails, similar to my other Pinarellos. The motor assist is great for those days I don’t want to go all out, or need a quick recovery ride. Admittedly, now as a senior, I don’t ride as much as before, so this bike is great to have. I do feel that it is definitely helping me regain my fitness. The Dyodo is well equipped with a mid level grouppo and I think the SRAM drivetrain shifts sharply and was easy to set the bike up out of the box. The wheel set is a bit heavy but sturdy and the Pirelli tires are 28mm so have good compliance and lower rolling resistance, which seemed noticeable to me. The overall weight with pedals is 28 pounds, so it is heavy by road bike standards, but I am not a lightweight myself, so the best weight loss is up to me. Without the motor assist it is a good workout to pedal. Overall, I am very happy with this bike and ebikemotion app is very useful. I wish a developer would design one for Garmin computers, but I am sure that is a matter of time.

Great bike for us senior riders

Ok, Ok, I may not be known around the office for my love of e-bikes but this thing is pretty fun. It is easy to use, charge, and switch between power settings. I was able to get out on a 35 mile, 2000' of climbing group ride with some fast riders ( disclaimer: I am not fast). I stayed in the medium setting for most of the ride and used about 90% of the battery ( disclaimer: I am not light @~190) This was fun to ride, genuinely fun, and I was grateful for the assistance because the group I was riding with was pretty quick and I would have been dropped in the first few miles. With this, I was able to keep up with the group for the entire ride, other than one section where it was a slight downhill and they were able to maintain a pace of 27 mph or so and I was unable to keep up since the motor stops assisting around 20 mph. No worries though I caught back up as soon as the hills started again. Bottom line, this is a fun way to keep up with speedier riders, particularly on the climbs. 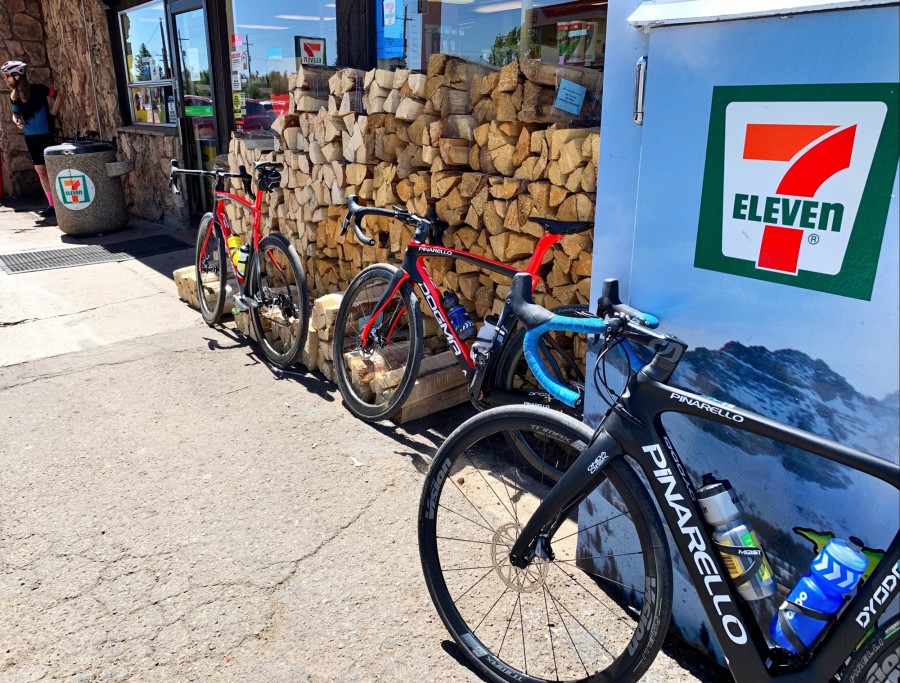 I bought one last spring mostly for the fun rest days when you want to get out and do an easy 25 and smile. My fpdue gets a rest day as well.

Does this bike have a standard wheel set? I always ride tubeless and would like to switch to tubeless wheels, whatever I buy. Can I order it with different wheels and tires and pay the difference?

Hi Charles, Thank you for your question. The motor is hub based, making a wheel swap very tough. The tires and wheels are tubeless ready. We can set it up tubeless before we send you the bike. Thank you

Mine came with the tubeless conversion valves so no problem to switch.

How far can a person weighing 130 ride unassisted? on eco? on std? and on turbo? are these bikes available in Canada? in Vancouver or Kelowna? is the price fixed in US $ Are they cheaper if bought in Italy at the manufacturer? Where are they made?

Hi Sylvia Pinarello says that the range will vary based on the terrain you're riding but on Eco mode you can get about 60 miles. In every mode you'll still have to pedal. Our prices are USD and while we can ship to Canada, these bikes ship freight which can get expensive. Pinarello makes most of their bikes in Asia.

Sylvia; my wife rented the Bianchi Aria e-road in Tuscany with exactly the same ebikeMotion motor & battery that is in the Dyodo (also same as in Orbea Gain, Wilier and the new Colnago E64). She's 125lb, and her longest ride was 85km/53m, 1500m/5000' climbing and she still had 20% battery left! She used all 3 modes but turned off battery on flats and downhills. Important note: currently you can't fly (checked or carry-on) with battery as the 250w capacity exceeds the FAA limit of 160w. Option might be to source out battery at your destination. This might be feasible, as more manufacturers are adopting the ebikeMotion system with common battery. Officially, manufacturers are saying battery can't be removed (void of warranty) but I have watched a bike mech do it and it is not difficult (3 connections). Partial disconnection has to happen anyhow if you have a rear puncture and must remove the rear wheel to fix flat. Anyone able to weigh in with other info regarding range and/or battery transport? Jo (Banff, AB)