Why We Like The Dogma F12 Disk Road Frameset

Just a few short months ago, the cycling world was abuzz waiting to see who would come on board as the sponsor replacement of juggernaut Team SKY. With its new sponsor, INEOS, we were greeted with the same team, but the riders were draped in red and black livery instead of the blue and black we were so accustomed to, and a brand new machine between their legs, a Pinarello Dogma F12. Never one to take equipment choices lightly, Dave Brailsford and company were happy to continue with Pinarello and if you're looking to pull the trigger and build up the latest, most advanced Dogma to ever come out of Treviso and value powerful disc brakes, this Dogma F12 Disk Road Frameset is the one you'll want.

Those who follow road cycling closely know that Team INEOS is fanatical about selecting products that achieve marginal gains and help its riders perform best during competition. You might have also noticed that, up until this point, most of its riders have chosen rim brakes over disc. Keep in mind that these riders get paid to race for a living and Froome, Bernal, Thomas, et al make it their jobs to maintain single-digit fat percentages and light it up on the climbs, so every gram saved, and fast wheel changes during the heat of battle, matter. That being said, we have seen some of its team riders embracing discs and with only a 20-gram weight penalty between it and the rim version and a night and day difference in power, modulation, and control, along with an aero benefit, we'll gladly choose the disc version every time. We truly believe in 2 to 3 years' time, the disc versus rim debate will be a moot point and the entire peloton will be scrubbing speed on dedicated rotors.

Pinarello wasn't always on board with discs, however, and many of its previous versions were simply repurposed rim brake models that had previsions for calipers added to the frame and fork, not optimal if you want to maximize weight savings, responsiveness, and ride comfort. With the F12 Disk, it's designed from the top-down as a disc brake machine and is constructed using an optimized layup of its Carbon Torayca T1100 1K Dream Carbon with Nanoalloy Technology. In doing so, it achieves the proper strength to withstand high braking forces. We can report the frame weight is reduced relative to the F10 Disk, and only bothers the scales at an impressive 840 grams (unpainted), again only 20 paperclips more than the rim version. Pinarello's mastery of T1100 1K Dream allows it to further refine the layup, reducing redundant material and increasing the efficiency of the carbon to save weight and achieve its desired ride characteristics.

The new fork wasn't immune to the update wand either and gets an impressive 40-percent increase in torsional stiffness compared to the F10 Disk. You'll simply descent faster and brake later with the confidence of the more powerful and better-controlled braking. Additionally, its shapes and profiles receive further refinements to improve this critical leading-edge component. Pinarello claims a drag reduction of 7.3 percent, which equals a savings of 8 watts at a real-world speed of 40kmh, compared to the F10, certainly enough to affect the outcome of a race. Returning highlights include the ForkFlap, a design queue we've seen imitated on more and more competitors disc brake aero forks.

We'd also be remiss if we didn't mention the increase in torsional and lateral stiffness at the bottom bracket by some 10 percent. Strong, powerful riders on the team such as Christian Knees and Ian Stannard will certainly appreciate this, and you'll be sure to notice it on the local bergs and cols that make up your favorite cycling loop. That additional stiffness doesn't come at the expense of ride quality, however, and we're also happy that F12 Disk can now accommodate up to a 28mm wide tire which adds oodles of grip and comfort while decreasing rolling resistance.

Besides better braking, perhaps our favorite feature with the F12 Disk is its ability to pair with the updated Most Talon Ultra integrated handlebar. The setup provides ultra-clean looks and watt saving internal cable routing meaning no housing is exposed to your eyes or the wind. The numbers are also impressive: 8 percent stiffer, 5 percent more aero, and 10 percent lighter than before.

The Pinarello Dogma F12 Disk is available in 13 sizes from 42cm to 62cm and in a smattering of colors that allow you to build up your dream Dogma without sacrificing fit or finish.

Fast as a Ferrari, solid as a tank

I just got my custom F12 disc build yesterday, pictured here. First off huge thanks to Ian and Ankit for their expert advice and help every step of the way. I am upgrading from a 2016 F8 rim brake build and the difference is profound. The F12 is fast. It is hard to describe why, but it feels like a Ferrari and is very easy to fly with it. At the same time, the bike feels much stiffer than the F8 - it feels as solid as a tank. No creaks or rattles, solid on the ground and confidence inspiring. Bombing down hills and stopping quickly with disk breaks is wonderful having come from rim brakes. The MOST Talon Ultra 1k handlebars are a dream and the lack of external cables make this feel like a bike from the future. Note that the Ultra 1k measures outside to outside vs center to center so take that into account when ordering Highly recommended bike! 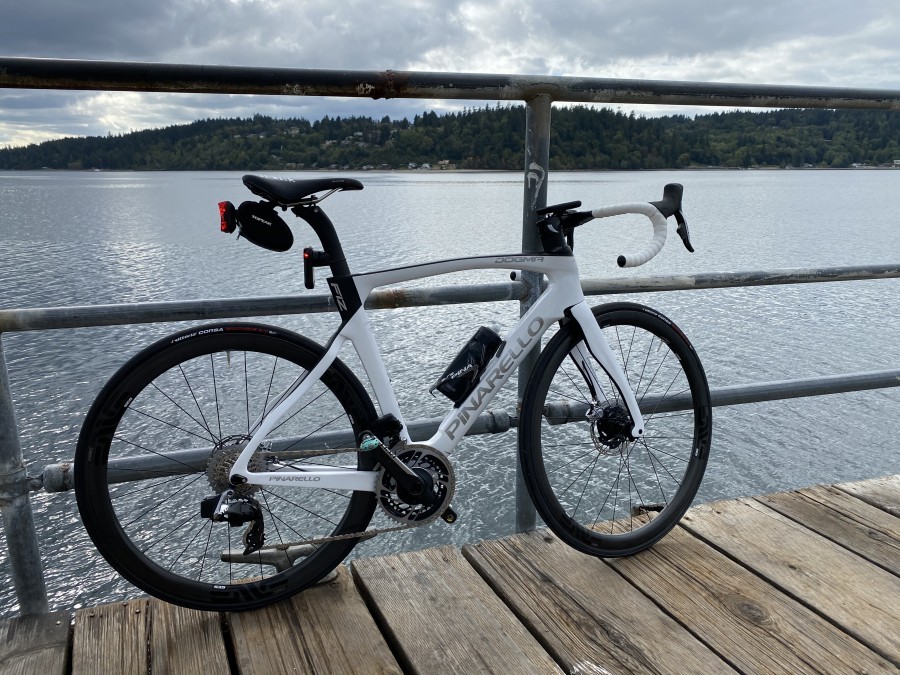 Stunning build. Thanks for the write up.