55
5 out of 5 stars2Reviews
Fit guide
Geometry

Icing on the cake.

Pinarello's Dogma F10 proves time and time again that it comes from good stock. It's proven itself in the biggest one-day classics and in the Grand Tours, most recently at the Giro. The F10 manages to balance ride quality, weight, and aesthetics way better than most and maximizes performance while minimizing tradeoffs. About the only thing we reckon would take it over the top is the inclusion of disc brakes. It's certainly not mandatory for road riding, but, the power, modulation, and performance in wet weather all point the advantage towards discs and with the Dogma F10 Disk Road Frameset we feel like we get to have our cake and eat it too…but not too much, we still have hills to climb!
On the surface, it might appear that Pinarello simply adapted disc brake mounts to the existing F10 frame. This couldn't be further from the truth, since adding the mounts and reinforcing those areas would negatively affect the ride quality and take on a weight penalty. Pinarello has experience transforming their previous superbike, the F8, from rim to disc, so the exercise wasn't too foreign to them.
The F10 was already one of—if not the—favorite all-around road bike here at Competitive Cyclist, and the addition of disc brakes takes it over the top. Pinarello, already experts in asymmetric carbon layup design in drivetrain applications now are able to showcase this technique into handling disc braking loads. This results in creating areas of the frame that are durable and completely apt at handling the disc brake stresses that they'll see without overbuilding the entire frame, adding unnecessary weight, or making the ride overly harsh. Though the frame is significantly redesigned, Pinarello continues the use of an Italian threaded bottom bracket shell, which is easier to install, maintain, and keep creak-free than the PressFit standard.
The Onda fork is also redesigned to meet the demands of disc brakes. Thru-axles are used to secure the wheel to the dropouts, increasing the stiffness and allowing for out-of-the-saddle climbing efforts and sprinting with nary a brake rub. Pinarello adds fork flaps, essentially mini fairings, to the trailing edge of the dropouts to further increase stiffness and enhance the aerodynamics. A 12mm thru-axle is also used out back to secure the rear wheel.
Like the standard F10, this bike has clearance for tires up to 25mm. This is, after all, a road racing bike, and 25mm tires offer the best balance of aero efficiency and rolling resistance. This isn't as much clearance as other disc brake drop bar bikes on the market, and many might be disappointed by the lack of space for tires, but an F10 did win Strade in 2017 piloted by Sky's Kwiatkowski on Continental Competition 25mm tubular rolling stock. We doubt the majority of you looking at this frameset have ambitions to build this into your gravel grinding rig, but the bike does have some gravel riding in its pedigree.
The beautifully balanced geometry from the F10 carries over, and it has proven itself capable enough to carry riders comfortably into the third week of a stage race yet so confident on the descents that you feel like cornering hard enough to blister a tire. The addition of discs encourages you to push your speeds downhill even more with all of that braking power available at your fingertips.
Build
Tech Specs
Frame Material
Toray T1100 1K Dream Carbon Fiber
Wheel Size
700c
Fork
Onda disc
Head Tube Diameter
1-1/8 - 1.5in
Headset Included
yes
Bottom Bracket Type
Italian
Cable Routing
Internal
Front Derailleur Mount
braze-on
Brake Type
flat-mount disc
Compatible Components
electronic and mechanical drivetrains
Seatpost
Dogma Aero
Seat Collar
Twin Force
Front Axle
12mm Thru-Axle
Rear Axle
12 x 142mm
Recommended Use
road cycling
Manufacturer Warranty
2 years
Geometry

First I bought the GAN S, a month later I decided to purchase the F10. Thats how much I love this brand. Happy riding. Thank you Rico 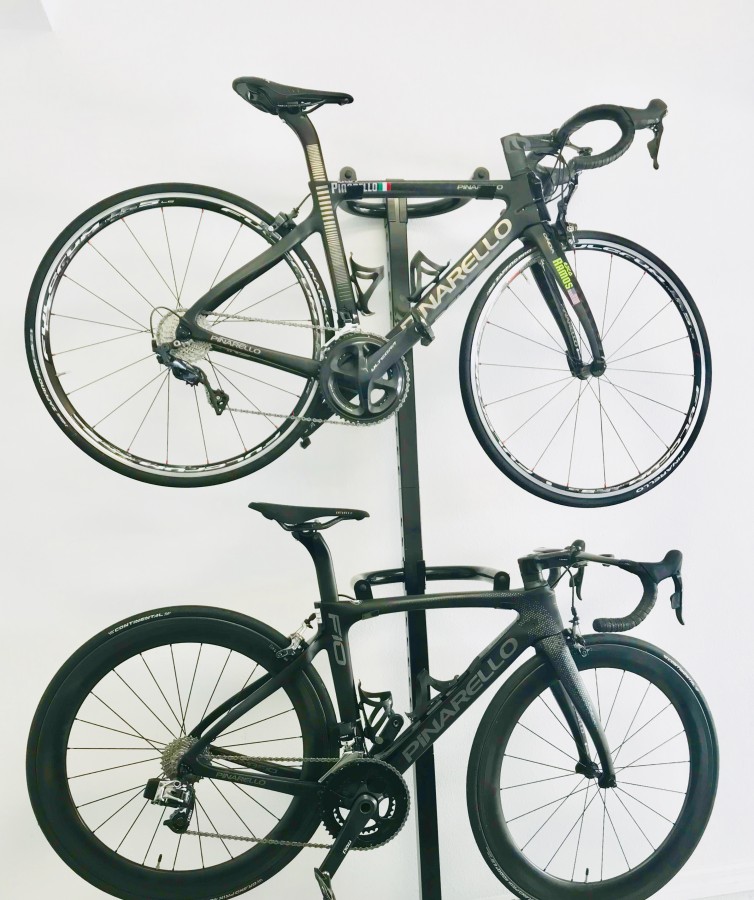 Perfection got a little better

PERFECTION GOT BETTER I had previously spent a lot of time on a Dogma F8 (rim brake), which was hands down one of the best bikes I've ever ridden. The bike was plenty stiff when i stood up to stomp on the pedals, yet surprisingly compliant and smooth over rough surfaces compared to other race-caliber bikes. The most distinguishing feature of the F8 was the way it cornered during high-speed, technical descents. Whereas some other race bikes are *too stiff* that the fork would start chattering during hard cornering, the F8 stayed completely planted. Not that I ever would, but I felt like i could take my hands off the bars at 40 mph due to its stability. Fast forward to the F10 Disk... I was able to really put this bike to the test equipped with Shimano Dura Ace 9170 Di2 at the Gran Fondo Pinarello in Treviso, Italy, which featured about 9000 feet of elevation (and subsequent descent). The F10 Disk took all the things I loved about the F8 and got disc brakes. I'll be the first to admit i've been pretty curmudgeonly about the whole road disc movement... I consider myself a fairly capable descender and have never melted carbon rims or anything of that sort. Disc brakes will inevitably be heavier, so what gives, right? In a word, performance. I really shocked at how much better of a descender i was on disc brakes. Whereas on a rim brake bike with carbon wheels I'd have to start braking pretty early and hold firm pressure throughout the corner to scrub speed, i found myself testing how late i could hold speed and brake going into corners due to the far superior braking power. Just as important as the actual braking power was the confidence in which I knew that it was there. Everyone has experienced that feeling while riding carbon rims that you're just not quite sure if you're going to get the braking you need. While i can't make any claims about how much faster you'll be on this bike than any other bike, I know for a fact that you'll be a faster descender on this one than your current rim brake bike. I was one of probably 20 or so riders in the Gran Fondo who had the privilege of previewing the F10 Disk early, and found myself flying past other F10 rim riders while descending. If you were waiting for a good reason to make the switch, thru axle standards have stabilized for the time being with 12x100 front and 12x142 rear so that you have the freedom to run pretty much any set of road disc wheels you choose. Inevitably, any conversation about a Pinarello would likely come back to its seemingly exorbitant pricetag... Crazy, I know. But this bike is legitimately a pleasure to ride. I dont think I'm exaggerating when i say that this bike will make you ride more because its that much fun. If you're looking for one of the best road disc bikes on the market, you've found a very worthy candidate above.