Though the name might be unfamiliar, Knight Composites enjoys the industry-defining pedigree of three of the minds largely responsible for the current state of aerodynamics in cycling. With the 65 Carbon Fibre/Aivee SR5 Road Wheelset, the company's founders have effectively announced Knight's intention to once again redefine the limits of aerodynamics in wheels, and — by including Aivee's SR5 hubs — the Bend, Oregon-based firm does so while losing a claimed 57g compared to the current industry leader in 60mm aerodynamic wheels.

Compared to the DT Swiss option, the Aivee hubs enjoy some nominal weight loss, which is always appreciated, but Knight cites an overall increase in strength as the real benefit of Aivee's hubs. It credits the French manufacturer's peculiar flange design for that increase, though we'd also suggest that Aivee's meticulous construction processes may also play a role. The hubs' bodies are machined in France on equipment that also produces aerospace and medical-grade equipment, harnessing the precision demanded by those fields in order to capitalize on the wheels' aerodynamic gains.

Those aerodynamic gains are what the Knight 65s are all about, and they're achieved with Knight's reimagining of the traditional approaches to drag reduction, codenamed Trailing Edge Aerodynamic Manipulation Technology (TEAM Tech). Instead of creating an aerodynamic leading edge, or even just an aerodynamic tire-to-rim transition, TEAM Tech designs wheels as part of a bicycle-wide system of aerodynamics that includes tires, rims, fork, and frame by focusing on the rim's trailing edge.

The result of the laborious TEAM Tech process is a cross-section that describes a tapered parabola rather than the sharp point of a NACA airfoil or the overly-rounded "U" shape of wheels that Knight's founders helped develop and that are dominating the market today. This new shape meets TEAM Tech's mandate by gradually widening airflow across the rim, which swells from 25.5mm at the slimmest part of the brake track up to 28mm at the widest point before tapering into the spoke face. This rim shape keeps airflow stable from tire to rim to down tube in order to minimize the drag caused by pockets of stalled air in the wake of the bicycle system's separate components.

The TEAM Tech design is proven in the cycling-specific FASTER wind tunnel. At low yaw angles, the Knight 65 maintains a consistent advantage of at least 30 grams of drag force than the leading, heavier competition. Once yaw hits the more common angles of 12 degrees and above, this advantage explodes to as much as four times that amount. Where other wheels of this depth struggle in less-than ideal conditions, the Knight 65 shines by giving you more advantage while the competition flags.

Those improved results at high yaw angles also produce positive effects on handling in crosswinds, since Knight's focus on trailing edge aerodynamics effectively pushes the side forces that cause erratic lateral movement to the back of the wheel. Steering remains predictable and correction is relatively intuitive under changing conditions — especially when compared to the pure NACA airfoil models that many manufacturers are still producing.

All the penchant for low-drag speed in the world eventually comes a cropper if the brake tracks have the performance characteristics of spongy snack cakes, though. To address the braking issues that so often plague carbon hoops, Knight updates the standard model of a textured carbon surface with the inclusion of a nanofiber layer designed to grab the pads when you grab the levers. It also modulates well, a pleasant feeling for cyclists used to carbon braking that operates at only two speeds: spongy and unresponsive or locked-up and squealing. Finally, the brake tracks are about twice as thick as Knight's competitor's models — up to 3mm from around 1.5mm. This effectively diffuses heat, helping to keep the rims from violently deforming by hitting the dreaded glass transition temperature.

Bought a pair of Knight wheels with Aivee hubs several years ago; to be clear, I did not purchase from Competitive Cyclist. About 10 months after purchase, the front hub flange cracked big time (3 spokes) - in fact it basically exploded as I never found the pieces (see photo). Luckily, I was only going about 5 mph at the time, but less than a minute earlier, I was riding along at more than 20 mph. So, I just came to a stop, since the spokes got caught in the fork...could have been much worse.

I have since replaced the the front hub and spokes with DT Swiss, which Knight uses in their better wheelsets. Knight refused to compensate me since I bought the wheels second hand from one of their pro racers - therefore there was no warranty. My mechanic was able to find out that the Aivee front hubs had a manufacturing defect, but again, no compensation from Knight. 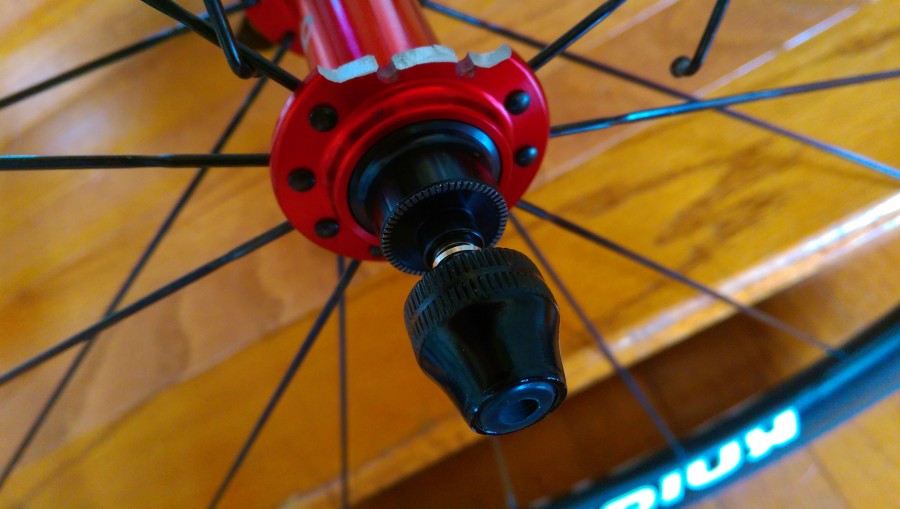 Can the number of front/rear spokes and the maximum rider weight be added to the Tech Specs?