Can't wait? Consider one of the other 29" Mountain Bike Wheels - Tubeless we have in stock.

It's lap 7 of the day at your local downhill park and your riding is on fire. You've been conquering rock gardens and gaps that you've been dreaming of all week, and you head into your favorite drop of the line, but you're cooking with a little too much speed, and when you land to flat you hear an unmistakable crunch, instantly followed by flopping rubber and an unforgivingly harsh roll out. And in that moment, your heart sinks as you embrace your new fate of life with a broken rim. Engineers at ENVE know the feeling, too, which is why they've spent the past two years designing a rim that can stand up to gravity-centered riding, without heavy rim inserts or compromising tire pressures. The ENVE M730 29in Boost Wheelset is there for you, with a redesigned rim that features a lightweight protective strip to keep your wheels spinning through rooty treelines and gut-clenching drops.

ENVE's M730 line takes queues from the M70's that came before it, like use of downhill-specific carbon laminates that stand up to aggressive all-mountain charging, but it strays from the profile with changes to increase strength. The M730 is designed to better pair with modern tires so that they can better absorb chunder and chatter from the trail without being run at ungodly-high tire pressures. Nothing will spook you faster when you're charging a dusty line than drifting in a corner where you were anticipating feeling planted, so ENVE made the M730 to run with their new Protective Rim Strip that provides pinch-flat protection so that you can run your tire pressure lower for increased traction. The Protective Rim Strip isn't designed just to reduce pinch flats, though; it's intended to protect your rim in its entirety against harsh riding and impacts, so that harsh puncture flats aren't so likely to lead to rim failure.

The carbon layup on the M730 is designed to resemble that of the M90's with the strength that you need for hard-hitting lines, but without compromising pedal-ability for long climbs to the top when you have to earn your laps. The rim width on the M730 might just land in our favorite sweet-spot at 30mm internal and 36mm external, much narrower than the beefier M735's, but still wide enough to enjoy 2.5-inch wide-trail tires, all the way down to ultra-versatile 2.3's for all-mountain adventures. This wide profile when paired with the Protective Rim Strip inevitably adds a bit of weight, coming in just over 150-grams heavier than the M70's, though we think a few grams are excusable when it comes along with better ride quality and protection from wheel-gobbling rock gardens.

ENVE's designers utilize their Smart system to create tough, stable wheels for all riding conditions. Using a patented process of molding in-spoke holes, valve stem holes, and nipple seats they earn ENVE's reputation for incredible strength-to-weight ratios. ENVE's carbon fiber is meticulously laid around each hole to maintain continuous fiber integrity, resulting in increased rim rigidity while keeping weight lower at the spoke face. When you lace this system up to a hub the result is a system that facilitates more uniform, and higher spoke tension than standard molding. In addition to their meticulous layup, ENVE uses a process that removes the inner bladder from the carbon fiber molding, which results in lower weight compared to other composite manufacturers who leave the rim-molding inner bladder inside the rim when the wheel is complete. The tedious process of removing the bladder adds expense, but lands you with a lighter rim with superior weight distribution and perfect tension.

It's natural to draw our emphasis to the rim when we talk about ENVE wheels, since that's where we see their industry defining carbon, but it's worth thinking about what we're lacing those hoops to. Completing the package, ENVE threads the M730's up with DT Swiss's iconic 240 hubs. With Swiss precision engineering and machining, the 240 maintains its status as a legend among DT's hubs. The latest refinements of the 240 hubs leave them extremely lightweight and durable, with a ratchet system that propels you forward with little lag so there's no waste of power. This model uses boost spacing for stiffer tracking up front and more responsiveness in the back. The hubs and rims come together in Utah, where they are laced up to create an impeccable wheel with the longevity you expect from a class-leading wheel system.

Quality that matches the price

The biggest criticism of carbon wheels is that they are too expensive and aren't much more durable than alloy wheels. Just read the Pinkbike comments and you'll have an idea of the distaste people have for carbon wheels. I can tell you from experience that these ENVE M70 wheels are incredibly durable and can take a beating. In my opinion durability takes a back seat to ride quality and until recently ENVE wheels were known for being stiff and unrelenting. However, this newest iteration of the M-Series wheels has made ride quality it's top priority and it shows. These wheels track straight through rock gardens yet still have enough give to ensure a comfortable ride over the roughest terrain. Cornering is where these wheels really shine. You can take more speed into corners and exit quicker when compared to wheels that give and flex under load. To top things off ENVE includes a protective rim strip which not only protects the rim wall but also helps to prevent pinch flats. If you're in the market for the best wheelset money can buy you should seriously consider the new line of ENVE M-Series wheels. 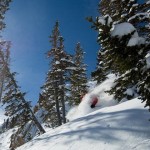