While the youth have never known an era without Crank Brothers' mud-shedding Eggbeater 3 Pedals, the old guard remembers the times when really sloppy trails made clipless pedals as useful as… well, they weren't useful. At all. As in you may as well have screwed some potatoes into your crank arms and just pushed your bike home. The aptly named Egg Beaters feature a wide-open structure that not only dumps muck, but also doubles the entry points of standard mountain pedals to four.

Like the original Eggbeater SL, the Eggbeater 3's body and wings are made of stainless steel to exacting tolerances; however, in a change from the SL, the 3's spindle is forged from super-strong chromoly steel, meaning that anyone can use these as there's no weight limit. The come-all-ye ease of use extends to clipping in, too, as the four-sided entry mentioned above places Egg Beaters among the easiest pedal systems to clip in and out of. Thanks to the four-sided wing of the Eggbeater, it's virtually impossible to not clip in with lightning quickness as soon as the bottom of your shoe hits the pedal, especially since the Egg Beater wing rotates either forward or backward under the pressure of your foot to quickly and smoothly engage the cleat.

The included brass cleats recess flush with the tread on the bottom of your shoes for easy walking, and they're designed for two release angles (15 or 20 degrees) depending on which cleat you bolt to which shoe. Crank Brothers recommends the 15-degree setting if you're new to clipless, but going for the gusto with the 20-degree configuration will allow more body english on the bike without the worry of an accidental release.

Igus LL-glide bearings keep the Egg Beater 3 Pedals spinning smoothly and represent a marked improvement compared to the bushings used on OG Egg beaters. When the time does come for an overhaul, you can take solace in the fact that nobody else's pedals are as easy to service as Crank Brothers'. The pedals include protective shims and all the hardware you'll need for installation.

This product can expose you to chemicals including Lead, which is known to the State of California to cause cancer and birth defects or other reproductive harm. For more information go to www.P65Warnings.ca.gov.

The Crankbrothers Eggbeater pedals have been my favorite clipless pedal since I switched from the SPD system about 17 years ago. They never seem to clog even under the absolute worst of conditions. Their simple design makes them incredibly durable and reliable. Besides, it amuses me when folks think my pedals are broken (I mean really, they certainly LOOK like half a pedal!).

The description states these have a needle bearing on the inside. The newer pedals use an Igus plain bearing - can you confirm the inner bearings on these pedals or provide the model year?

Hey David, I'll need to wait until Monday to have someone get hands on these to double check the inner bearings but I can confirm that we received these in the last few weeks. The electric blue color arrived to us mid-February 2020. The Red and Black ones were received 3 days ago on March 11th. hope that helps answer your question. Feel free to reach out to me directly with any more questions at mbova@backcountry.com.

my go to mtb pedal

I switched to the egg beaters a few years back and have never looked back. They are easy to get in and out, simple no look pedals. The clean off well in messy conditions. They've lasted very well and been trouble free. I will buy them again.

These have a nice feel when you're clicked in; they have some knee-friendly rotation. Entry doesn't require a 'toe-in' like modern Shimano-style pedals. You can just push down. Release is extremely easy. The design is super clean and doesn't get clogged up at all. The pedals are extremely light, and also extremely durable, unlike some of the earliest models from years ago. The cleats are brass and wear out but for me that is a negligible cost.

Use these on my XC rig, swap out the spindles with Ti spindles and end up with a nice light pedal.

Gonna give 'em a try

Been riding Shimano for years but a few folks I know rock these...gonna try 'em out this CX season. Light, shed mud, etc pretty well from what I hear. A millions ways to get in them.

I have been using Crank Brothers Candy and Eggbeater pedals for the past 10 years, and I swear by them. I've had my current pair for 8 years, and recently got another mountain bike for my son to start racing in the high school series and needed another set of pedals. No reason to look at anything else, as these pedals work in so many trail conditions. No issues, and the extra float in the cleat is comforting allowing proper alignment.

I've been riding eggbeaters a long time now, long enough I don't remember having SPD pedals. So maybe I'm a biased source. Easy to click in and out when you want. Easy to rebuild with the kit. It takes a beating and keeps on cranking. 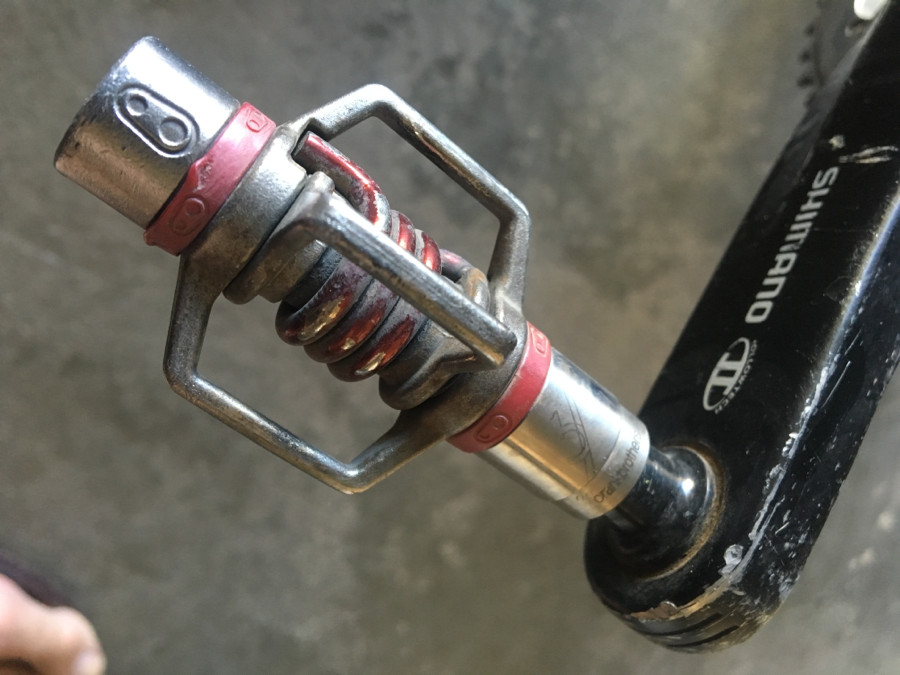 Perfect design, performance, float, and engagement. Best pedals out on the market!