The Chris King R45 Rear Road Hub features an all-new 45-point engagement Ring Drive designed specifically for road riding. While still having nearly double the points of engagement as other high-end hubs, reducing the points in the R45 from 72 means the hub will still have the distinctive Chris King sound but won't be nearly as loud as you would expect.

I have two wheels sets with these hubs both bought in 2019, except both have ceramic bearings. I am beyond impressed with the quality and durability as well as ease of self service. I only want CK hubs now.

Make sure to know what you're buying!

I purchased this hub 2 years ago not knowing what I got into until last week. This item definitely said that it's compatible for 11-speed but it's NOT!!!
I was trying to fit my new 11-speed Shimano DA cassette but it doesn't fit!
Like Marc R. said in the comments, I did pay an arm and a leg for the 11-speed conversion kit from Chris King since I had no choice.
At this point, I'm very disappointed in the fake "advertisement" and all I got from Competitive Cyclist is "Sorry, can't do nothing about it" deal.
The hub is very nice and all... but purchased from the wrong website...
If you also check the Chris King official website, it does not state that this hub is 11-speed compatible!! Also checked several different sellers as well.
Be careful with what you buy and fake descriptions!!!

Two years ago was the 11 speed version came out, so there was a period of old/new stock. I would have to think it is all 11 speed for new stock. I am considering pickingup one soon as part of a rebuild.

I'd like to see an update from CC to confirm the current state of affairs. 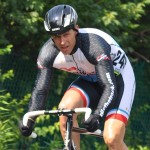 Chris King made two versions of the R45 - 11 speed being the newer of course and they are visually identical. (The flange distance is actually different between models; it's not simply the 11sp conversion kit on the older hub.) The only way to tell for sure is to measure with calipers using the Chris King data sheet. (The difference is a matter of about 2MM.) I wouldn't necessarily trust a retail rep to know that degree of detail although they should have known when selling a $400 hub.

This is my second R-45 hub and it simply works, and works, and works. I like the fact that its not as "angry bee-ish" as traditional hubs and its weight helps build up some race worthy wheels. I have had to adjust the bearings once, which seems in line with most CK parts as the bearings break in a little. After the initial seating, I have not had to touch the bearings.The only issue I have it that the hubs last so long you won't ever get a chance to try anything else out because these hubs will still be rolling along years later.

just chatted with CC. No, these ones are 10 speed only. Chris king has a conversion kit they will charge you an arm and a leg for, so that would not be worth it for most folks...

The front R45 is listed as stainless steel. Would bet this is too.

It doesn't really specify on Chris King's website either. Would assume ceramic is an upgrade though.

The hub is available from Chris King with ceramic and it adds a serious chunk to the price. The CC ones are not ceramic as far as I know.