As cyclists, we tend to make considerable sacrifices in pursuit of lower weight, but trading safety for weight just seems boneheaded to us. That's why we're pleased that Campagnolo is now offering dual pivot calipers in the front and rear on the Athena Skeleton Dual-Pivot Brakes. They do gain a few grams over a dual/single set, but the extra stopping power may mean the difference between a close call and a bad end to a ride.

Dual-pivot brakes have a greater lever length on both sides, so they produce more power on the wheel's braking track. Previous setups have used dual-pivot up front but a single-pivot model in the back. Two dual-pivot brakes means that you've got maximum stopping power for maximum safety. This is further complemented by the forged skeleton design, which was and remains focused on stopping power, ease of use, and lightness. Its strength is due to the fact that no part of its body is machined.

The Athena brakes don't have the orbital adjustment of the Chorus, Record, and Super Record branded brakes, and they weigh a claimed 19 grams more than the heaviest of those three. Other than that, they enjoy all of the functionality of Campy's other brakes, including the special compound brake pads and the safety tab that keeps them in place. The tab is in the back half of the shoe and is released with a little leverage from a small, common screwdriver.

These are re-branded TRP's

It's maybe not that big a deal except to say these aside from the TT brakes these are the only ones made by TRP.

I only found out when wondering why my Mavic Exalith pads were not fitting properly.

After speaking with Campy US. They said this is the first year they have done this.

I'm not sure how other carbon or rim specific pad is going to fit but if your running Mavic Exalith don't try to run it without the screw and don't force it in as your going to push the pad out from sitting flush.

I think for $100 the price is right but it would have been nice to know in advance there aren't a Campy made brake.
If you don't want to go the DIY route you can use another pad holder but only the Super Records fit the TRP's which probably cost more than the brakes themselves.

If your using the supplied Campy pads you won't have any headaches. 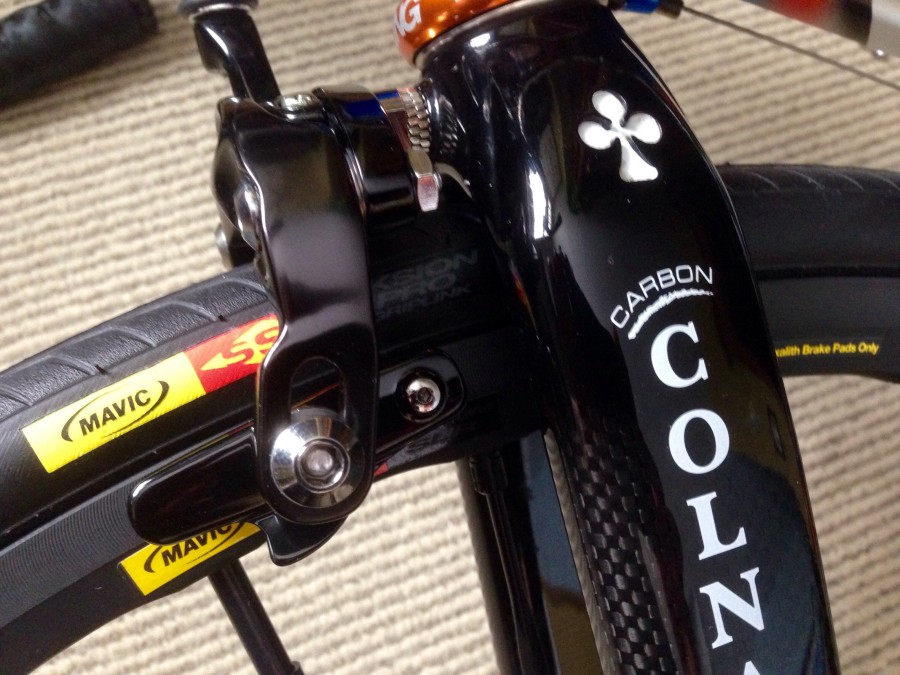